Indie booksellers across the country have chosen Tiffany D. Jackson’s Grown (Katherine Tegen Books) as one of their top picks for the Fall 2020 Kids’ Indie Next List. 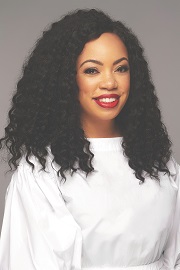 When aspiring singer Enchanted Jones meets legendary R&B artist Korey Fields, her dream of being a professional singer starts to become a reality. At first, she’s thrilled to be whisked away on his tour. But alone, Korey’s dark side comes to light, and Enchanted is unable to escape his influence.

Until she finds Korey dead in his apartment. As the evidence stacks against her, Enchanted must find out who really did it — and why they framed her.

“Tiffany Jackson has truly outdone herself with Grown, which is saying a lot as we’ve come to know her as one of the most brilliant storytellers in YA,” said Cristina Russell of Books & Books in Coral Gables, Florida. “But without a doubt, Grown hits at a new level. This novel is one of the most important, relevant, and utterly compelling stories of the year. It is a sharp-edged tale that both teens and adults should make space for in their to-be-read piles this year before it makes all of the award lists in the spring! Believe Black girls. Protect Black girls.”

Here, Bookselling This Week and Jackson discuss systemic racism and abuse as well as what it takes to craft a thriller. 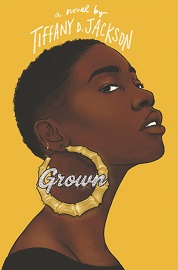 Tiffany D. Jackson: This idea came from the reaction to the documentary Surviving R. Kelly. I was thinking about how people reacted to the girls [who came forward], and how they placed a lot of fault on them, how they were victim-blamed. I kept thinking of how I could have been one of those girls. I did have an older boyfriend when I was a teen. Some people can’t imagine being manipulated, but I can really speak to that. I decided to write with that in mind, to explain how something like this could potentially happen.

I don’t usually get personal in my writing. This was the first time where I felt like I wanted to be an example of how you can find yourself in this situation despite your circumstances. I come from a two-parent household, I wanted for nothing, etc. But there are exceptions to this “rule” that people have made up in their head, these antiquated thoughts. And I also wanted to step out specifically for young girls, to say, hey, you may make mistakes, but you’re not your mistakes.

BTW: In your author’s note, you also mention that this book is not about R. Kelly — it’s about the abuse of power. Why make that distinction?

TDJ: I think people really get caught up in the idea that this is all laid in one man’s hand. He was a perpetrator, but there are so many more people involved, and that’s exactly what happens in these types of cases. When you think of Harvey Weinstein, Jeffrey Epstein, Bill Cosby, you only think about the people themselves, but there’s a machine behind these people that is protecting them. We should focus not just on the perpetrator, but on how someone in the public eye with so much power can get away with so much.

TDJ: Because it’s true. That’s the easiest answer — it’s truth. And not many people recognize that. It takes so many voices, so much screaming and shouting to even get that truth to be acknowledged sometimes, which is devastating for a Black woman to live through. Your word is never good enough. There has to be a triple layer of proof on top of that. I specifically used that quote to convey a statement that’s been ongoing for as long as we can remember.

BTW: To build off of that, in a 2018 Vox interview, you said that children shouldn’t be sheltered from issues like racism because they’ll turn into adults who don’t believe it’s happening. Can you expand on this idea in the context of the current Black Lives Matter movement?

TDJ: I think one of the things we’re dealing with that’s quite scary in terms of this problem is the idea of fake news. People haven’t actually been exposed to and taught about the realities of other people’s cultures and situations. And I feel like, quite frankly, some adults are very set in their ways. They’re not open to learning. But when we think of children, if we start exposing them to issues that have happened in the past and issues that are actually happening now, the hope is that they won’t fear these types of issues. Or, they won’t say, these things don’t really happen. They will have a better understanding of what systematic oppression is like.

There’s a girl right now who’s in jail because she didn’t do her homework [#FreeGrace]. When thinking about girls like her, people immediately look at the crime and say, “She must have done something bad.” Rather than looking at the rest of the story — why would she not do her homework? What wasn’t available for her to complete her homework? Why is this the only solution to a problem like this? Why is this only happening to Black children?

When we start getting young kids to think about the deeper root of the problem, we can hope that they spark change. We need more kids to be involved in their local politics. That’s what’s going to change their communities.

BTW: While this book delves into social issues like racism, systemic abuse of power, and sexual assault, it’s also a page-turning thriller. Why explore these topics through the lens of this genre?

TDJ: I love thrillers. And I always want these types of topics to be covered in thrillers because it’s more of an experience and you can have a more visceral reaction. The hope is that visceral reaction will truly stay with you, because when you’re learning through history textbooks or something like that, what you read can go in one ear and out the other. In fiction, you’re sitting in someone’s shoes while they’re going through something like Enchanted did. You become the character, and you’re witnessing life through the character’s eyes. You’re truly part of the story, and you never really forget that.

I also feel like there aren’t enough Black thrillers out there in the world. So, why not write a thriller and also add a piece of a social issue that could inspire kids to do their own outreach and activism?

BTW: This book provides an in-depth exploration of what Enchanted goes through in her relationship with Korey, but it also brings her family and community into focus, particularly her younger sister Shae and her local chapter of Will and Willow. How did you craft these dynamics and why did you include them?

TDJ: It takes a village to raise a child, and I wanted to explore that proverb more to show that communities do get involved when children are being abused. A lot of the time, people feel like families are alone, and sometimes they are. But there is a better way to handle a situation like this. Will and Willow is based off of Jack and Jill, which is a real organization. I wanted to show how Black communities can really come together, and what happens when people do come together to bring someone down. When we work together as a community, that also helps. We’re stronger in numbers. I feel like that’s one of the key points of the #MeToo movement — women and men coming together to stand against an issue.

TDJ: This is a tough book. I recognize that. And there are going to be challenges against this book for various reasons. But, at the end of the day, I know that this is something kids really need to see, especially young girls who may be in this type of circumstance. I want them to be brave enough to use their voice, which is something that doesn’t really happen often. Particularly in the Black community, we come from a community where there’s an adultification of girls specifically. There’s an assumption that they should know better. I feel that we need to start observing the language that we use toward girls, because it really does stay in their psyche and make them question their own actions. We should be looking at the real person who’s involved — the person responsible.

The following resources are included at the end of Grown for those who might need them: