Bookselling This Week recently reached out to several ABA member booksellers who attended the 2018 Frankfurt Book Fair in Germany earlier this month. Below are comments from three of the four booksellers who received 2018 Bookselling Without Borders scholarships. Founded by Europa Editions and co-sponsored by additional publishers and book industry partners, the scholarships send American booksellers to international book fairs around the world (the fourth winner, Elliott BatTzedek of Big Blue Marble Bookstore in Philadelphia, could not make the trip). For more on booksellers’ experience at the fair, check out last week’s account from Jeff Deutsch, director of Seminary Co-op Bookstore in Chicago. 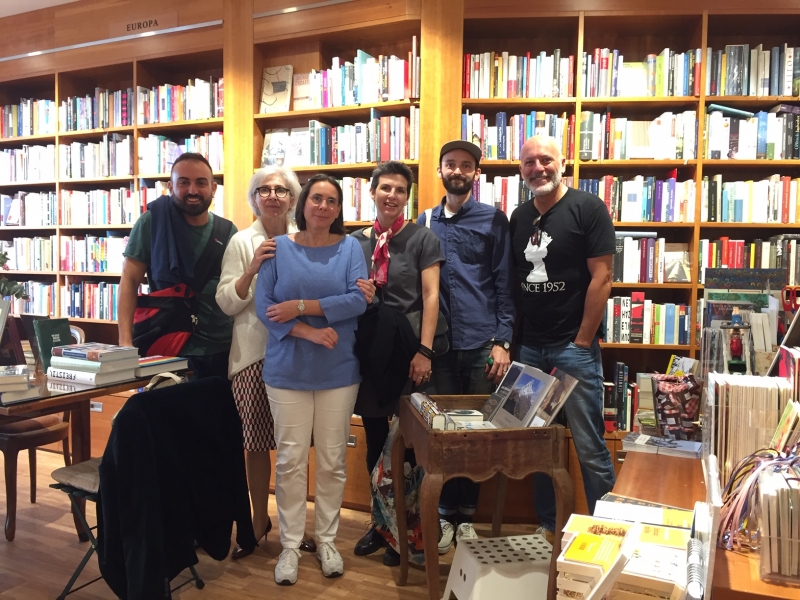 Lyn Roberts (third from right) at her favorite bookstore in Frankfurt, Buchhandlung Weltenleser (Bookstore World Reader), where books are shelved according to setting, with owner Maria Lucia Klöcker (second from left) and Dylan Brown (second from right).

“Visiting the Frankfurt Book Fair was overwhelming and exciting in the best way possible. The vibrant work on display and the enthusiasm from publishers all over the world was inspiring and reassuring, demonstrating that despite whatever challenges the bookselling industry currently faces, there will be no shortage of interesting and fascinating books. I also think that programs like Bookselling Without Borders are doing work that will be increasingly beneficial in facilitating closer relationships between bookstores and publishers, especially the smaller (yet vital!) houses that rely heavily on independent bookstores to carry their titles.

“I also had the opportunity to visit three bookstores in Frankfurt and six in Berlin. The staff at each store were helpful, knowledgeable, and friendly. Motto Berlin and Marga Schoeller Bücherstube were highlights, with wide and eclectic selections that were impressive for the smaller, cozy spaces they occupy.”

“In Frankfurt, I began to understand that the role the bookstore plays in each of our communities is the same around the world. This universality was validated as I visited bookstores in other cities during my trip. In Paris, Frankfurt, and Berlin, shops of different sizes, specialties, and styles reflected their environment, and all were busy. In Paris, Shakespeare and Company even had a velvet rope to regulate the line of people waiting for admittance.

“Returning home and sorting through business cards, notes, and book recommendations written on bar napkins, I realized that although I had so many new experiences as a Bookselling Without Borders fellow, I was always engaged and at ease among these book people from so many countries. In a sense, we all speak the same language.”

“Most of our time was spent in meetings with publishers learning about international rights and acquisitions. It was great to get a sense of the work that’s largely invisible to booksellers. My Bookselling Without Borders cohort also participated in a panel on bookselling in the U.S. during the EIBF conference taking place at the fair. I was able to tell the Co-op’s story (some of it, at least) to a gathering of booksellers from Germany and the U.K. I found it very heartening to be in a room with booksellers from around the world and realize that we have so much in common: a shared sense of mission and passion for the books on our shelves, as well as for bookselling as a profession.”