Take a Walking Tour of Downtown Albuquerque at Winter Institute 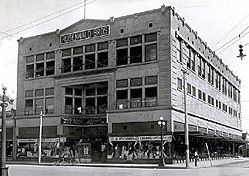 The Rosenwald Building on Central Avenue in Downtown Albuquerque used to be a department store and now houses offices.

Coordinated by Arcadia Publishing author Roger Zimmerman, tours are scheduled for 10:00 a.m., 12:00 p.m., and 1:00 p.m. on Tuesday, January 22, covering the history of the development of the city. Booksellers who wish to participate should meet Zimmerman at the Arcadia Welcome Desk, located at the Albuquerque Convention Center’s 3rd Street entrance; booksellers can sign up in advance with Arcadia here. Tours, which are sponsored by Arcadia’s new YourTown store match program and the Albuquerque Historical Society, will last around one and a half to two hours.

Founded in 1706 as a Spanish settlement, Albuquerque’s Old Town exists today as a community influenced by both Spanish and Native American heritages, with historical reference that dates back to the 1500s. Zimmerman said the tour will focus on New Town, which began its ascendance when the railroad came to town in 1880. Early building and development occurred first between First and Third Street, then expanded until it reached the city’s Robison Park, at Eighth Street.

“The tour will go down old Route 66 along Central Avenue,” Zimmerman told Bookselling This Week. “That is eight blocks down, from First Street to Eighth Street, and has about 20 buildings. Eight of those buildings are on the historical registry.”

Zimmerman, who has been the historical society’s president since 2013, is currently working on a book for Arcadia Publishing called A History Lover’s Guide to Albuquerque. He said the city’s tour program, which will provide four guides for the ABA tours, started in 2014 when the Albuquerque Historical Society, in conjunction with Historic Albuquerque, Inc., received a grant from the Urban Enhancement Trust Fund of the City of Albuquerque to develop materials and train guides to operate a free downtown tour program.

The Sunshine Building on Central Avenue, one of Albuquerque's first skyscrapers.

Over the years, said Zimmerman, about 50 guides have gone through the program, which continues to this day with a rotating schedule of 11 trained guides who give tours of Old Town and New Town. Booksellers can find more information about the tours on the Albuquerque Historical Society website.

Zimmerman added that guides will not be giving Winter Institute tours of Old Town in part because that section of the city is relatively far away from the convention center, around one and a half miles. Secondly, said Zimmerman, “There just aren’t any buildings that are that old. That’s because downtown Albuquerque is in a floodplain and we had a serious flood in 1874, so a lot of the old adobe structures didn’t do too well.”