Indie bookstores are celebrating Black History Month this February with a range of interesting and educational book displays, book club events, and cultural activities to remind people of the many contributions African Americans have made and continue to make to society. 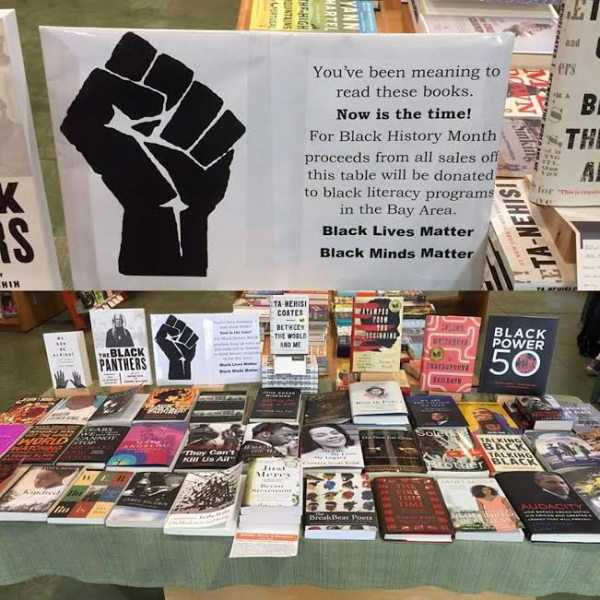 At Beyond Barcodes Bookstore in Kokomo, Indiana, store owner DeAndra Beard said Black History Month festivities officially began on the town’s monthly First Friday event, when the store partnered with the University of Indiana Kokomo for a joint celebration. Beard has been working with the university’s student services department and diversity office on how the school can better work with the bookstore to promote it as a community space.

Since the beginning of February, Beyond Barcodes has also hosted a jazz band as well as an African dance class, which featured the instructor for the store’s spring and fall cultural dance program, Rhythm Connections. The store’s Bind Café is also offering a new Caribbean menu for the month, featuring beef patties, steamed cabbage, tropical punch, and other native foods.

Later this month, Beyond Barcodes will welcome author Judith Richards, who will discuss her book Thelonious Rising (River’s Edge Media), about a young African American boy struggling in the aftermath of Hurricane Katrina, to be followed by a children’s headdress craft and a Mardi Gras festival.

“I’ve pulled the big themes from the books and invited local organizations that deal with those things to come and set up a booth, including a local mental health association, a representative from Homeland Security to talk about natural disasters, and an organization in town that works with the homeless population,” said Beard. “At each table, you get your Mardi Gras beads and the person with the most beads at the end wins a prize.”

Next month, Beard, who is currently trying to raise money to buy her building, which is shared with the Beyond Borders Language Learning Center she also runs, will kick off interviews for her Black Kokomo community research project, which will trace the history of African Americans in her town since the time of slavery.

Hannah Oliver Depp, operations manager of WORD Bookstore, which has locations in Jersey City and Brooklyn, said her store has set up a number of new book display tables this month. WORD stores also feature a few evergreen tables that speak to racial issues and black culture and empowerment, she said.

“We did a series of book displays right after the election on the topic of how did we get here and what do we do now, which focused on American history, especially books featuring minorities, women, African Americans, and the LGBT community,” said Depp. ”We also have a year-round Black Lives Matter display, and the titles on that table this month reflect Black History Month. We also have a kids’ Black History Month display in both stores.”

Staff picks to be revealed in mid-February will feature new releases and special recommendations for Black History Month, added Depp, who appeared at last month’s Winter Institute Town Hall to speak about the lack of diversity among booksellers. A founding member of Indies Forward, the new volunteer organization dedicated to supporting the emerging generation of booksellers, Depp joined with other booksellers to urge ABA and others in the bookselling community to take concrete steps on the issue.

California’s DIESEL, A Bookstore also has book displays set up for Black History Month in its Brentwood, Oakland, and Larkspur stores.

“We have book displays, as we always do, in each of the stores, and our website also still has 10 books we recommended for Martin Luther King Jr. Day posted at the top of our blog,” said co-owner and ABA board member John Evans. That list of 10 includes such nonfiction books as The New Jim Crow by Michelle Alexander (New Press), Between the World and Me by Ta-Nehisi Coates (Spiegel & Grau), and The Fire This Time by Jesmyn Ward (Scribner), as well as books of poetry, including Citizen by Claudia Rankine (Graywolf) and Voyage of the Sable Venus by Robin Coste Lewis (Knopf).

“The Oakland store’s display is on our most prominent table, right as you enter the store,” said Evans. In addition, proceeds from books sold off of that display during Black History Month will be donated to black literacy programs in the Bay Area. Also in Oakland on February 20, Evans said, the store’s ongoing book club The Queer People of Color Book Group will be discussing the novel All Inclusive by Farzana Doctor (Dundurn).

Stores that are setting up special displays, hosting events, and doing outreach for Black History Month are encouraged to share their news and photos with Bookselling This Week.