Bookselling This Week recently reached out to Sarah Benoit of JB Media Group as well as Mary Cate Stevenson and Noah Nofz of Two Cats Communications regarding best practices for booksellers when replying to online comments. The following is some of their advice. 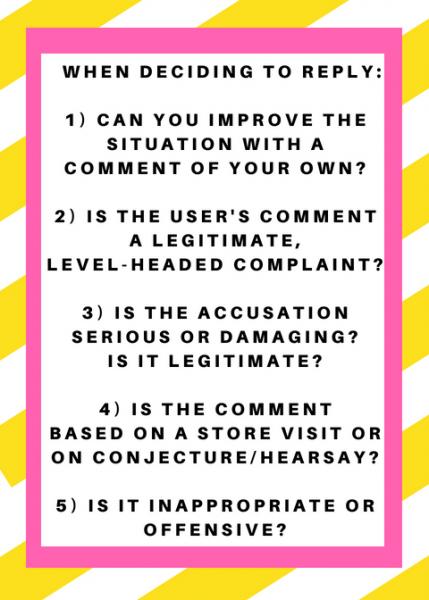 Benoit, the director of training at JB Media Group, an Asheville, North Carolina-based digital marketing agency, has previously spoken about social media best practices at ABA’s Winter Institute and Children’s Institute and is currently running a social media and marketing online course for indie booksellers. In a conversation with BTW, Benoit said that when it comes to any social media platform or website with a reviews feature for businesses, stores should always try to respond.

“Whenever somebody is saying that they are unhappy or they disagree, my rule of thumb is: respond to all of it,” said Benoit. “Of course, larger bookstores are going to have more comments or reviews flowing in, so for them it’s not always possible to respond immediately, but having some sort of time set aside every week to review what people have left on different sites is crucial. If you can, look through anything that is negative and immediately respond to that, and if you have time past that, respond to some of the positive stuff.”

Even if a bookseller does not see the negative comment until two weeks or a month later, Benoit says to still respond. That way, the comment’s author will see that someone is paying attention to the fact that they were unhappy and replied to them, albeit belatedly, with a customer service response. As a rule, Benoit advised booksellers to check every online review site at least once or twice a week and to respond the same day to any comments left on the store’s Facebook page (Facebook recently combined its recommendations and reviews sections, so Facebook reviews fall under the “check once or twice a week” category).

According to Benoit, there are two kinds of negative reviews: one is written by someone who has had a legitimately bad or unsatisfying experience at your store. The second kind is the unproductive, abusive kind, written by someone who is acting irrational, ranting, and not making sense, or who is being reactionary and just trying to start an argument. For this second type, booksellers should think about either removing those reviews or blocking the author on that platform.

Benoit advised booksellers to make a document with various prepared responses for use by staff members who are responsible for managing the store’s social media, and to establish a protocol for whether a response needs to be run by an owner or manager before it is posted. However, Benoit noted, stores will always encounter unexpected scenarios.

“In real life, if a customer walked up to your counter with a complaint, you’d be forced to answer. To me, we don’t suspend that just because it’s online or on social media,” said Benoit. “To not respond, in my opinion, gives the impression that you’re not listening or you don’t care. With any company, big or small, that’s a tone that you’re setting, whether you’re aware of it or not. If people think you’re not listening, that’s going to reduce the positive things that are said, not just the negative things.”

“Sometimes when people are really upset about something, you can go online if you’re the manager or the owner and offer to take the conversation offline and give them your phone number,” added Benoit, even if their complaint is over a store policy that is not going to change. “It’s going to open the door to making people feel heard, whether you can fix the problem or not. At the end of the day, you give them the opportunity to change their opinion of you.”

Stevenson and Nofz, owners of the Houston, Texas-based digital media marketing company Two Cats Communications, currently manage ABA’s Facebook, Twitter, and Instagram pages and have handled social media and digital content for indie bookstore clients like Blue Willow Bookshop in Houston. Before founding Two Cats Communications, they were community managers for a company that marketed its services to small businesses. One of their primary tasks was reputation management, which involved replying to all reviews and comments left by users on their clients’ social media pages and review platforms.

In a conversation with BTW, The Cats shared some of the lessons they learned during this experience, which they say have carried forward into their work with indie bookstores and ABA. These days, said The Cats, the considerations that go into their responses to user reviews/comments, especially when dealing with a complicated situation, come down to a single bottom line: if a response will likely do more harm than good, don’t reply (and vice-versa).

“We operate on two key commandments: one, not every review or user comment merits a response, and two, never publish a reply when you’re upset,” said The Cats. “If a comment is abusive or inappropriate, we take official action. For example, one of our clients hosted a high-profile, ticketed event. Not everyone was able to get a ticket due to limited capacity, and on one of our posts about the event, a user commented that we were ‘cruel for not selling more tickets.’”

“To determine whether to reply, we considered the following,” they continued. “One, can we improve the situation with a comment? And two, is the comment a legitimate, level-headed complaint? Ultimately, we chose not to reply, because the user was simply sounding off on their feelings, and there was no legitimate complaint that we could address. Other considerations include: is the user making a serious or damaging accusation and is it legitimate? Are they reporting on an actual visit to the shop, or are they posting based on conjecture or hearsay? And is the comment or review inappropriate or offensive?”

If a review or comment is abusive or inappropriate, they said, many platforms have steps booksellers can take to block the user or report or remove the review or comment; however, the user can sometimes return, depending on whether the page owner bans them from the page or simply deletes their comment.

On Facebook, you can ban a user; on Instagram, in addition to banning users, you can delete a comment by swiping on it and clicking the trash can icon; on Twitter, you can report abusive tweets or block a user; on Google Reviews, you can report a review that violates Google’s Terms of Service, such as one that contains hate speech or profanity; and on Yelp, you can flag a review that violates Yelp’s guidelines, though Yelp reviews tend to be hard to get removed.

One of the trickiest scenarios that can come up for a bookseller when replying to comments or reviews are those related to politics, ideology, values, or anything else that can lead to heated dialogue or problematic language.

Examples of indie bookstores that have dealt with controversy or public harassment include Inquiring Minds Bookstore in Saugerties, New York, which took heat prior to the 2016 election for displaying an anti-Trump flag bearing a swastika; Rough Draft Bar & Books in Kingston, New York, which was criticized for creating a book display that satirically refuted President Trump’s statement about  “s**thole countries”; Politics and Prose in Washington, D.C., which was harassed online due to its proximity to Comet Ping Pong, the focus of an alt-right conspiracy theory; and Revolution Books in Berkeley, California, which was harassed online and in-person by members of the alt-right.

When an online reviewer is commenting because he or she disagrees with your values as a company or believes your store is too radical politically, said Benoit, the best thing to do is to stand up for yourself politely and respectfully, but with conviction.

“It comes down to how the comment is written because if they do say anything directly threatening to you, anything that you can interpret as racist or something that is negative toward an entire group of people, a lot of times you can report that to the site,” said Benoit.

“But if someone just says something like, ‘We don’t like that author, that author supports things that we don’t think are right,’ that’s where we move into that muddy area of a person having the right to his or her opinion, whether it’s right or wrong,” she continued. “That is where being really clear on the values of your brand and knowing how as a team you’ll be responding to things like that is important. As a store, you have to answer the question of, what do we feel comfortable saying about what we believe in?”

In the end, Benoit advised booksellers not to get too concerned with negative reviews, since they can actually be a really helpful form of customer feedback, and, on many of these online platforms, having more back-and-forth conversations tends to boost the value of that business’ page in the associated algorithm. If a customer goes to a review site and sees a business with only five-star reviews, added Benoit, they won’t learn anything at all about the business, which, presumably, was their goal.

Booksellers who have further questions about this topic or any other issue related to social media are welcome to contact Benoit or The Cats for more advice.