As Find Waldo Local 2013 –– sponsored by Candlewick Press and the American Booksellers Association –– came to a close in communities across the country, participating booksellers took note of the event’s success and eagerly look forward to next year’s festivities. 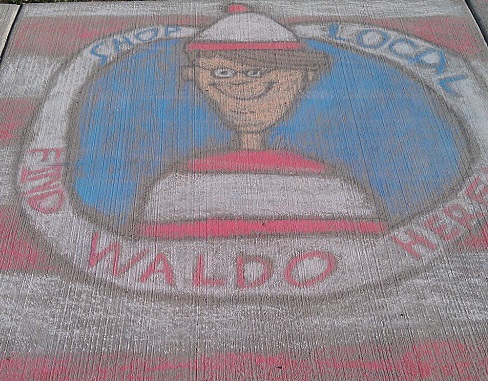 The chalk art that adorned the sidewalk outside of Reading Frenzy Bookshop.

This year at Reading Frenzy, in Zimmerman, Minnesota, participation nearly tripled from last year, said store owner Sheri Olson. The number of community members who made it to all 25 participating businesses went from 30 to 79, and many more were involved to a lesser extent, she said. The other businesses that took part were impressed with both the turnout and that many families came out to search for Waldo, said Olson.

The local newspaper helped publicize “Find Waldo Local”  by printing the store’s entire press release, and the Chamber of Commerce wrote about the event in its newsletter. Posters were displayed in all participating businesses and event details were widely distributed via social media.

The in-store reception following the month-long scavenger hunt brought 78 people into the store and yielded many sales. Reading Frenzy handed out 20 percent off coupons to anyone who found Waldo in the bookstore, and many customers came back to the store to receive their discount.

“Overall, I thought it went very well,” said Olson. “I have people already wanting to be a part of it next year.” 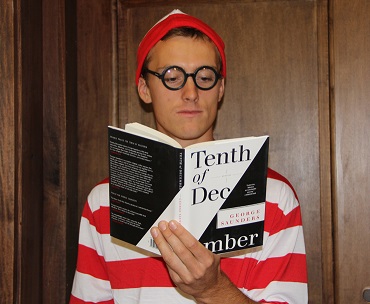 This was the first year that Colgate Bookstore, in Hamilton, New York, participated, and it was very well received, said book buyer Kate Reynolds, who heard a lot of positive feedback from participating businesses.

The bookstore distributed press releases and the library was actively promoting the scavenger hunt. The store received about 50 completed passports, but Reynolds said many more people participated to a lesser extent. At the in-store party last week, Waldo posed for photos and drew names of the prize winners.

“We certainly sold many Waldo books,” said Reynolds, “but I’d say the main benefits for the store were the community-building and general good will that was generated.” 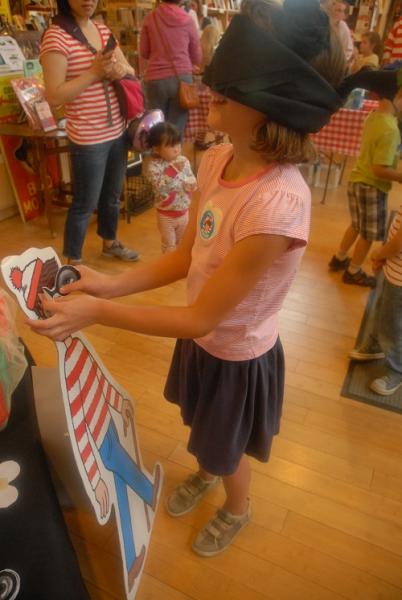 This was the second year that Village Books, in Bellingham, Washington, took part in Find Waldo Local, and  the event was again met with an enthusiastic response. The store received 125 completed passports, but an estimated 200 people participated on some level, said events coordinator Christina Claassen.

July is typically a busy tourist month in Bellingham, but not necessarily a busy shopping month, said Claassen. However, the Find Waldo Local festivities helped bring new people into the local businesses and yielded more sales than usual.

Last Wednesday, about 50 people attended Village Books’ in-store party to put a cap on the Waldo festivities. Many attendees dressed up in Waldo stripes, and local businesses donated Waldo-themed items to be given as door prizes. The store served snacks and led the group in several different games, including “pin the glasses on Waldo.”

In the month of July, Village books sold 77 different Waldo products, which is “definitely an increase,” said Claassen. “There was a clear direct benefit in terms of Waldo sales, and sales in general. When adults waited for their kids to find Waldo, they usually found something they wanted to buy.

“It was also a great opportunity for us to connect with other businesses, and help with relationship building in our area,” said Claassen.

The Book Spot, in Round Rock, Texas, joined the Waldo fun for the first time this year, and was able to bring many customers into their store during a time that is usually slow in the suburban Texas community. About 50 customers brought in completed passports, and Waldo sales definitely increased, said owner Danny Woodfill. The large Waldo display at the front of the store helped, he said, and many people came in asking about Waldo products.

The biggest benefit however, Woodfill continued, was that the event allowed The Book Spot –– which opened in 2011 –– to establish itself as a leader in the community for small and local businesses.

The businesses in the town are planning to hold an event in the fall that puts the spotlight on shopping local in a similar way that Find Waldo Local does.

The community-wide enthusiasm came as somewhat of a surprise to Woodfill, who asked, “Who would have thought that Waldo would be the one to get people thinking about shopping local?”