Raven Book Store Owner Publishes “How to Resist Amazon and Why”

Danny Caine of Raven Book Store in Lawrence, Kansas, has published a zine titled How to Resist Amazon and Why. The 16-page zine features Caine’s October 2019 letter to Amazon CEO Jeff Bezos, a review of the case against Amazon, a compilation of Raven’s Twitter advocacy, and additional material.

How to Resist Amazon and Why was quick to receive widespread attention. Caine told Bookselling This Week that “Between in-store sales, online sales, and wholesale orders we’ve shipped out, we’ve moved about 1,400 zines in the first 10 days. All of those were hand stapled by me, my wife, and my friends.” Caine added, “we’ve sent them to around 60 stores in the U.S., Canada, and England.” 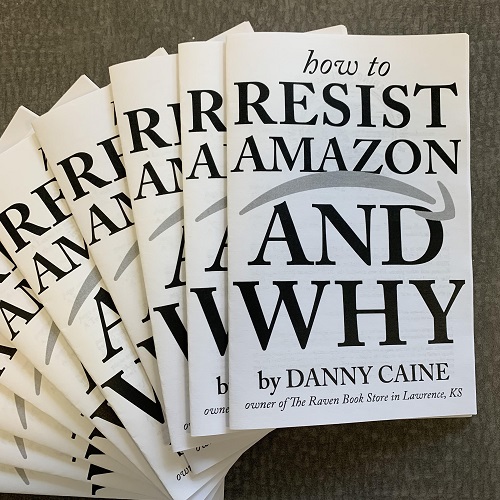 According to Caine, Microcosm expects "How to Resist Amazon and Why" to be its best-selling zine of the season with already a few thousand pre-orders.

Due to the zine’s popularity, Raven partnered with Microcosm Publishing to assist with distribution. Microcosm has a record of resisting Amazon — even going as far as altering its business model to no longer have a direct distribution relationship with the company. Microcosm has positioned itself in such a way that Amazon sales comprise only one percent of its sales each month.

According to Caine, Microcosm expects How to Resist Amazon and Why to be its best-selling zine of the season with already a few thousand pre-orders. Microcosm confirmed that Caine’s zine was impressively its #2 title for the last week of October.

Joe Biel of Microcosm told Bookselling This Week, “I think the zine has been so successful because people feel very frustrated by Amazon.” Biel added that no one “realized how big of a title this would be. Nor did anyone realize that [the zine] would resonate so deeply with bookstore employees.”

In Raven’s letter to Bezos last month, Caine articulated some of the many ways Amazon has hurt booksellers. “We like business competition, we think it’s healthy. But the way you’ve set things up makes it impossible to compete with you,” said Caine.

He challenged the idea of tech companies “disrupting” old ways of doing business to further innovation, saying “…we are not ripe for disruption. We’re not relics. We’re community engines…If your retail experiment disrupts us into extinction, you’re not threatening quaint old ways of doing things. You’re threatening communities.” 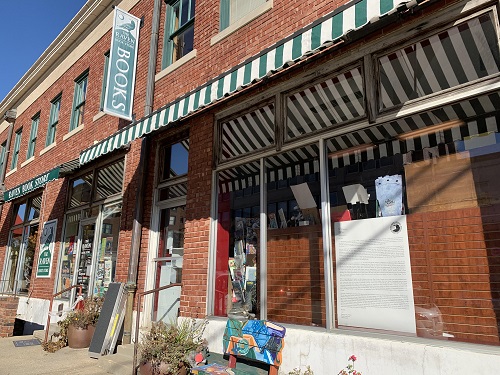 Raven recently hung a poster-sized version of Caine’s letter to Jeff Bezos in its front window.

Raven recently hung an enlarged poster-sized version of Caine’s letter to Bezos in its front window. In addition, Raven trains all staff members to be knowledgeable about Amazon’s monopolistic and anticompetitive conduct in order to foster meaningful conversations with customers.

Caine’s release comes as ABA gets ready to host its Antitrust Symposium on Tuesday, January 21, 2020, in Washington, D.C., in conjunction with the 15th annual Winter Institute (Wi15). At the Symposium, booksellers will have the opportunity to hear from antitrust advocates and experts and to meet with Congressional staffers from their districts to discuss, among other things, Amazon’s effect on their bookstores, and the need for a comprehensive antitrust investigation into Amazon’s business practices.

Caine, who plans to attend the Symposium, said, “I can’t wait to learn more about how we can resist the encroachment of big tech into small businesses.”