A Q&A With V.E. Schwab, Author of October’s #1 Indie Next List Pick

Independent booksellers across the country have chosen The Invisible Life of Addie LaRue by V.E. Schwab (Tor) as their top pick for the October 2020 Indie Next List. 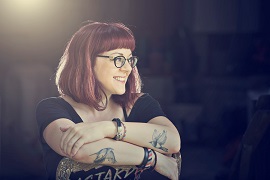 “Epic, beautifully written, heartwarming, and heartbreaking, The Invisible Life of Addie LaRue is a contemplation on life, death, what it means to make your mark on the world, and why we feel it’s important to do so,” said Lindsey Pattavina of R.J. Julia Booksellers in Madison, Connecticut. “Addie makes a deal with a demon so she can live her life the way she wants to. But, like most deals, there are strings attached — and these strings make it so she is forgotten by everyone she meets. Dancing about time, the book shows Addie’s life over 300 years and takes a closer look at her modern life — after a boy in a bookshop remembers her. Months later, I’m still thinking about this book and how beautiful it is; my words don’t even come close to doing it justice. Read this book.”

Victoria “V.E.” Schwab is the #1 New York Times, USA TODAY, and indie bestselling author of more than a dozen books, including Vicious, the Shades of Magic series, and This Savage Song. Her work has received critical acclaim, been featured by Entertainment Weekly and the New York Times, been translated into more than a dozen languages, and been optioned for TV and film.

Here, Bookselling This Week and Schwab discuss her writing process. 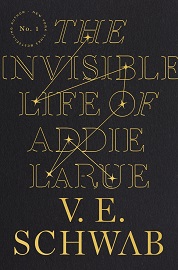 V.E. Schwab: I was 22 when I first got the idea for it. I was living in a garden shed in an ex-prison warden’s backyard in Liverpool. It was miserable, and I was miserable enough that one of my housemates, who had a traveling job, would drop me off and I would spend hours just completely by myself in really random areas of northern England. I would spend a lot of time thinking, and when I think, I usually think about mortality and memory and time. I was walking through the Lake District all by myself for hours, and I was wet and uncomfortable, and I had just read Peter Pan in college. I was struck by how sad of a concept it was, that by the end of the story, Peter’s already forgetting that it happened. At the same time, I was losing a grandmother to dementia, so I was dealing with a lot of memories. I was watching my grandmother forget us, but I was also watching my mother be forgotten. It was so startling how much more painful it was for my mother to be forgotten than it was for my grandmother to forget.

That really got me thinking about loneliness and how lonely it would be to be an immortal, to have infinite amounts of time and no way to share it with anybody, and what kind of personality it would take to sustain yourself. Addie was really born out of this concept of me wanting to write an inverted Peter Pan — a girl who is forgotten instead of a boy who forgets.

BTW: You’ve mentioned on Instagram that this book took 10 years to write. Can you talk about what that process was like?

VS: It doesn’t normally take me that long to write a book. I’ve written 18 other books, and it usually takes me one to two years to sit with a concept before I start writing. I like to have all the pieces in place before I start telling a story, including the voice, the ending, and the arc, but pieces were always missing for Addie. I was around 25 when most of them came together, and then I realized I wasn’t a good enough writer yet to tell the story. Often in writing books we are telling the same story over and over again. It’s kind of a catharsis. But every now and then you have the chance to tell a story where you know you only get one shot — and Addie’s story felt like a one-shot story. I didn’t want to rush, and I was so afraid of this story that had lived in my mind for three years. I had this idea that I wasn’t going to be able to do it justice. So, I would put it off and check in with the idea every year or two, as if to open the lid on a pot on the stove to see if it was ready, and it was never ready. Finally, I became terrified I was going to die without writing it. I was 29, and I was running out of time in my mind. I didn’t want this to be the thing I never wrote, this infamous absence. I hit a point where I was afraid to write it and afraid to have not written it. That’s when I knew I just had to do it, I had to get something down on paper that was imperfect, as all first drafts are. When I was 31, I finally just flung myself into the draft.

BTW: How did you craft the character of Addie LaRue?

VS: In the beginning, Addie’s character was much sadder than she turned out to be. She was much more melancholy and much more filled with existential ennui, and as I wrote her, I started to think about the fact that if that was the case, she never would have survived. Because Addie has her hand over the red button. She can end it any time she wants. It was over the years of sitting with Addie that I realized I’d written her wrong in my head. Instead of this existential ennui that we see in all immortal narratives — I always think back to Louis in Interview With a Vampire, someone who resents their immortality — Addie had to be a different kind of beast. Someone who, even in her darkest moments, even in her hardest times, is so focused on the promise of a better future or another day. In the beginning, she’s driven by stubborn spite, a desire to prove the devil wrong. But that doesn’t sustain you for 300 years; that might sustain you for five or 10 or 50. I needed to get to the crux of what sustained her beyond spite. When I finally started to write the book, I wrote the words “a defiant kind of joy.” Those became the words that were the crux of her character. So, as I wrote her, I always kept my eye on that notecard, and I always made sure I was writing her from a place of defiant joy.

BTW: Addie is granted literal immortality, but she is also immortalized through art. Why did you fold a discussion of art and creation into this story?

VS: My background is in art, and I needed something to sustain Addie besides her own defiance. Her discovery that ideas are wilder than memories, that creativity doesn’t always have a source to be valid, was something I realized she could play with. So much about Addie’s narrative was finding the cracks in the curse. How could I find the breathing room for her to play within the confines of the hand that she’s been dealt? I needed a way to empower her — to give her agency again. The discovery that she can influence art and become a kind of muse is something that I think is not only an archetypal concept — muses are something that are explored across a lot of different storytelling — but it makes sense that so many people talk about inspiration and they’re unable to tell the source.

BTW: This book has many settings, but one we spend a large portion of the book in is New York City. What drew you to this particular place?

VS: I lived there around the time I first had the idea for Addie. I was very enamored with it. I didn’t have an easy time in New York City, but I love the contrast between New York and Paris. I knew that those would be the two focal points throughout the book. Paris is such an old world city, and New York is such a new world city. I know a lot of people would consider New York an old city, but it’s such an American construct of age. The phrase in Britain is in the U.S. a hundred years is a long time, and in the U.K. a hundred miles is a long way. For Addie, it’s such a new city, but that’s something she really loves about it. And I do feel like it’s one of those places you could live your entire lifetime and only discover a tiny fraction. I wanted to set her up in a city of secrets, and a city where you could feel that we were discovering it alongside her.

Before I ever started writing Addie, I traveled to every place in the book that I write about. I was in every place because I knew I wasn’t going to spend very long — a lot of these are just a single memory, a single interstitial. But when you only have a couple pages in a city, you can try and convey some core aspect of it. I wanted to make all of the locations feel like characters in their own right, and I wanted them to all feel very authentic.

BTW: One of this book’s many other settings is a used bookstore in New York City. Can you talk about the role indie bookstores play in your life?

VS: People call me an overnight success, which is an average of 10 years. The average overnight success is just a career. Long before anyone seemed to think of me as shiny, long before anyone seemed to have a clue in hell who I was, indie bookstores kept me on shelves. Indie bookstores believed in me, they took chances on me; individual booksellers fell in love with my work and pushed in and hand-sold it.

For the first five or six years of my career, I got to keep writing books because individual booksellers believed in my work, supported it, and handed it to people who then bought my next book and my next book and my next book. I will never take a spot on a bookstore shelf for granted. That’s why getting something like the Indie Next List pick and getting to see the bookseller reviews is so astonishingly humbling to me. I knew there were a lot of booksellers out there who believed in my work because I see it through the readers, but I owe them everything. They were the original readers for me — they found out about me when nobody else had a clue. I’m incredibly, incredibly grateful for that.