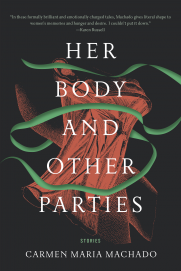 Machado’s collection, to be released October 3, contains eight stories that combine genres including fantasy, horror, magical realism, and science fiction to weave surrealistic portraits of violence visited upon women’s bodies, touching on issues from female desire and agency to societal entitlement over women’s bodies to fear of own’s own body. Narratives include a new take on the classic horror tale “Jenny and the Green Ribbon” in “The Husband Stitch,” and a mysterious plague of incorporeality that affects only young women in “Real Women Have Bodies.”

“Reading the stories in Her Body and Other Parties has been among the greatest literary pleasures of 2017 for me. Carmen Maria Machado writes with fearless exploration, precision, and tenderness, which would prompt envy if gratitude and admiration weren’t first to arrive on scene,” said Chorel Centers, events coordinator at Bookshop Santa Cruz in Santa Cruz, California. “From the lovely apocalyptic love story ‘Inventory’ to the dizzying and original ‘Especially Heinous,’ Machado’s work is curious, inventive, and thrilling. It’s feminist and pop culture, classic and weird; the stories are complex and the characters are haunting. What a debut!” 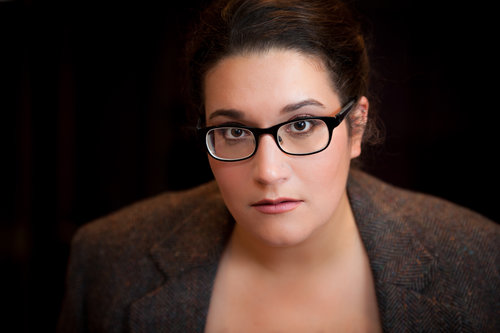 Machado’s fiction and nonfiction have appeared in The New Yorker, Granta, Electric Literature, and the Best American Science Fiction & Fantasy, Best Horror of the Year, and Year’s Best Weird Fiction series. She has an MFA from the Iowa Writers’ Workshop and is the artist in residence at the University of Pennsylvania. She has also been awarded fellowships and residencies with the Elizabeth George Foundation, the CINTAS Foundation, and Yaddo.

Here, Machado, who will be touring this fall to promote her book, talks to Bookselling This Week about how her feminism informs her writing, her passion for Law & Order SVU, and her favorite genre-bending authors. The week following BTW’s interview, Machado’s book was longlisted for the National Book Award for Fiction.

BTW: Your stories explore ideas about women’s bodies through a queer, feminist lens. What inspires you to write about these issues and what is that writing process like?

CMM: I like to think of my short stories as problems I’m trying to solve, like a math problem, and writing the story is the way by which I arrive at the answer, which is also the story itself. This is a collection that centers around ideas that I have about gender and things that I think about all the time as a woman. I try to approach it from unusual angles, like the ghost story in “Eight Bites,” bending the genre a little bit and seeing what comes out of that.

These are just things that I’m preoccupied with. I didn’t set out to write a story about how I feel about fatness. I had the idea for that story because I had been thinking about gastric bypass surgery and my personal feelings about that, and then figured out a way to have those manifest on the page. In that case, it was a woman losing all of this weight and then the ghost of her body coming back to her, this creature that was created from her body.

The book is about things that I’m really interested in; it’s definitely a feminist collection because I’m a feminist and my preoccupations are filtered through my feminism, but it wasn’t like I set out to write a story with a message. This is just what I’ve been thinking about.

BTW: Your work has been described as genre-bending. You tend to write, or combine, many different genres in your work, including fantasy, horror, science fiction, and magical realism. What other authors do you admire who perform similar mash-ups in their writing?

CMM: One of the earlier influences in terms of my current style is Kelly Link. She was a finalist for the Pulitzer a few years ago and she has this really incredible body of work. Her stories just defy description; I feel like whenever I try to describe her work to somebody else I just end up saying, “Oh, you’ve just got to read it.” I just can’t explain it.

Kathryn Davis is another writer who I’ve been reading a lot of recently, who is really similar in that she just blasts past all those boundaries and isn’t interested in the rules, which I really like. Nicholson Baker also does that, where he writes in a lot of different genres. Those are the big ones I refer to and think about a lot.

BTW: The story “Especially Heinous,” a surreal take on the first 12 seasons of Law & Order SVU, is one of the book’s standout stories. Are you a huge fan of the show?

CMM: I am, and right before we spoke I was watching an episode of Law & Order because I’m writing an essay about it. Yeah, I’m definitely a fan. I have a lot of thoughts about it, which is, I think, obvious from my story. I have a certain perspective on both the show itself and also narratives about sexual violence. It’s really interesting to me because right now Law & Order SVU is the only currently updating Law & Order series; it’s managed to outlast all the others, including the original, and it has this really rabid fanbase, including myself. And I’m really interested in the questions of, what does it mean about society that we are so fixated on this show — which is the worst version of humanity, sexual violence — and what does it mean that we are so engaged by these narratives of women suffering?

BTW: Where did the title of the collection, Her Body and Other Parties, come from?

CMM: I came up with that title pretty early on. Actually, my thesis from grad school had that same title even though there were only three stories in common with the finished version of the book. I came up with it because I was trying to mash together various titles of stories that were in the book at the time (“Difficult at Parties” and “Real Women Have Bodies”); I was playing around with them and that’s the title that came out.

When I teach, I tell my students that party scenes are really great because a lot of things can happen in them. It’s good for bad behavior, you can get a lot of characters together all at once, and, yes, they can be both these really glorious and really awful spaces. It can be so many things at once, and it’s similar, I think, to the way the body is. The body can be a source of pleasure and satisfaction and identity, and it can also be a source of great pain and suffering. I feel like those things sort of exist together. The body is a thing that you have and a thing that is looked at; there is this sense of ownership and then this outside perspective. I wasn’t really thinking about that at the time, but as the book changed, the title felt even more relevant to the content than it did before, which is why I kept it.

BTW: What is your writing background?

CMM: I’ve been writing since I was a kid. I come from a family of storytellers, and I’ve always been a voracious reader. As early as I could hold a pen, I’ve been writing stories and books. I used to actually write letters to publishers and send my stories along. I’d find the address on the side of my Baby-Sitters Club books and then I would write to Scholastic and be like, here’s my novel! I bet some intern got a real kick out of that!

Then I went to college, where I was a journalism major for a while. I didn’t like it, so I switched to photography, and then when I was living in California in my early 20s I decided to apply for an MFA program. Once I got to grad school, I began a professional career of a type. When I was in my last year, I began to think more about my work as a larger body and just kept following the stories that really excited me. It took a while; post grad school I was working retail and writing stories. I’ve always wanted to be a writer in some capacity, and then in the last few years it’s actually become a professional thing.

BTW: What are you working on now?

CMM: I’m working on several books right now. I sold a second book to Graywolf, so I have a memoir coming out with them in 2019, and I’m also working on an essay collection and maybe a novel in stories.

BTW: What would you like to say to booksellers who nominated your book for the Indie Next List?

CMM: I’m really heartened by people’s support of my collection. I know that short stories are not the most commercially viable form in the world, and I’m just blown away by booksellers’ love and enthusiasm for this book. When I saw the bookseller blurbs that my publisher sent me, I cried.

I’ve always loved bookstores. They’ve been a really important part of my life for my whole life, so to see all of these booksellers support the book has been really profound and exciting and heartwarming. I’m just beside myself with excitement and gratefulness.