Elizabeth Jordan, the new CEO of BookPeople in Austin, Texas, has been named a PW Star Watch finalist. 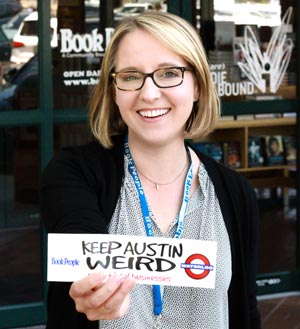 Jordan, who was named CEO after longtime CEO Steve Bercu retired in June, is among five book industry standouts in the running to be named Publishers Weekly’s fourth annual PW Star Watch “Superstar” winner at a celebratory event on Wednesday, September 12, in New York City. The winner will receive an all-expenses-paid trip to the Frankfurt Book Fair in October.

“It is such an honor to be named as one of five PW Star Watch finalists from an impressive list of publishing professionals and booksellers,” Jordan said in a statement to Bookselling This Week. “This is an exciting yet challenging time to be a bookseller. I'm proud to be part of a tradition of success here at BookPeople and look forward to shepherding the store through its next chapter.”

In an interview accompanying Publishers Weekly’s announcement of the finalists, the San Antonio native told the publication that she has covered most of the jobs at the store since she began working there in 2002: she initially rose up in the ranks to sales floor manager, then worked as adult book buyer and inventory operations supervisor from 2007 to 2017, when she became general manager.

“I came to the bookstore because I liked to read,” Jordan told PW. “I liked the business of bookselling, which was a shock to me. I had a philosophy background.”

“For years I was like, ‘Why can’t we do this?’” Jordan told PW. “[The Texas Book Festival] had been with Barnes & Noble from its inception. I was inspired by Politics and Prose doing the National Book Festival [which had also originally contracted with B&N].”

Since becoming CEO in June, Jordan told PW, it “has been an adjustment for me to step into the limelight, to be the face of the store. Some days, I just want to go to receiving and do something concrete.” As she adjusts to the role, though, her goals include restructuring her time to be more productive and holding regular town-hall style meetings with staff; she also plans to focus on pre-orders “trying to see our share and the independent market share grow.”

The five finalists for the PW Star Watch program, which honors book industry professionals from the U.S. and, for the first time this year, Canada, were selected from an original list of 47 honorees, which themselves were chosen from a pool of 300 nominations. Those nominated by their colleagues in the publishing and bookselling worlds included publicists, editors, designers, startup founders, and booksellers.