Opportunities in the Digital Arena for Independent Bookstores: An Action Plan for the American Booksellers Association

In 1978 Douglas Adams envisioned a slim electronic folio that contained all the useful knowledge of all the people on all the planets in the universe. The Hitchhiker's Guide to the Galaxy, as Adams imagined it, would let you carry in your pocket a device that functioned like an amalgam of Google and an e-book. And while he was trying to be funny, Adams, it turns out, was prescient.

Throughout the 1980s and 1990s, the book industry went through a series of fits and starts with digital content. "Franklin was the first company to provide an e-book type device. In 1986 Franklin launched a fully functional electronic dictionary. This would be followed in the early '90s by Sony's unveiling of the Electronic Book Player. This product used CD-ROM technology to provide book material for viewing. The limitations of this product gave way to the eBookMan. In both cases consumers were tied to the purchase of discs or cartridges in order to view book materials." [a]

ABA's own history with e-books began in 1999. That year the association signed one of the first contracts with NuvoMedia, maker of the Rocket eBook, the first stand-alone device onto which consumers were able to download trade books. The intent was to sell digital content through the BookSense.com network of sites, which was under construction at that time. But early consumer enthusiasm for e-books in general, and the Rocket eBook in particular, evaporated, and a conscious decision was made to shelve our e-book aspirations until the market was both better developed and more settled.

Music to My Ears

During the early part of this decade, while ABA was waiting for the e-book market to sort itself out, a revolution occurred in the world of digital music. It began in 1999 with the launch of Napster.

A site for users to share MP3 files, Napster grew exponentially right out of the gate, swelling to 26.4 million users worldwide by 2001[b]. The response from the music industry was swift and harsh. A series of lawsuits by artists and labels alleging copyright infringement were filed against Napster and forced the site to shut down operations in July 2001. The music industry had won, but it was a pyrrhic victory.

By focusing so heavily on copyright infringement rather than trying to understand the clear shift in consumer preferences and behavior, the big labels and the music retailers were caught flat-footed in the face of the sudden and enormous demand for digital content. Enter Apple.

In October 2001, Apple introduced the iPod. Portable MP3 players were not new, and the early success of the iPod was one of form over function. It was sleek, easy to use, and marketed brilliantly. While sales of the iPod were steady and strong in its first two years of existence, they exploded in 2003. Since October 2004 the iPod line has dominated digital music player sales in the United States, with over 90 percent of the market for hard drive-based players and over 70 percent of the market for all types of players.[c] The key to the iPod's market dominance was a new, killer business model: The vertical integration of content and the listening device.

Apple launched its iTunes store in spring of 2003, selling an astounding 1,000,000 tracks in just five days.[d] By 2006, iTunes had gained 88 percent market share of the legal music download market, with consumers downloading one billion tracks that year alone.[e]

While the burgeoning sale of digital content might, on the face of it, have seemed to be good news for the music industry, it was not. "In 2008, Americans bought 88 million fewer CDs than they did in 2007 -- a full 20 percent drop. At the same time, according to Nielsen SoundScan, digital album sales shot up 32 percent and single-song sales rose 27 percent."[f]

This was devastating to the music industry. Digital music purchases, which typically happen one song at a time, have not been enough to make up for the loss in CD sales. In addition, Apple's proprietary Digital Rights Management (DRM) package, called Fairplay, created an iPod/iTunes monopoly, and the labels found themselves held hostage as Apple dictated below-market prices for content.

The result has been the erosion of revenue at the labels, and a body blow to the ranks of music retailers. According to the "Almighty Institute of Music Retail," an industry research group that provides data to record labels and music retailers, approximately 2,700 record stores closed between 2003 and 2008.[g] Digitization and consolidation were changing the music industry and changing it fast.

As the music industry unraveled, and as consumers became comfortable accessing content in digital forms, the ground for e-books became fertile: The volume of e-book purchases grew.

In early 2007, as reports of renewed consumer interest in digital content began to permeate the blogosphere and the tech news stream, and as we watched sales of e-books grow, ABA partnered with Ingram Digital to offer e-content in three formats to consumers shopping the family of BookSense.com websites. This was an inexpensive solution that allowed independent booksellers to dip their toes in the vast digital ocean, but it wasn't a comprehensive solution. The formats available to our customers could not be easily read on the most popular devices and the process for searching for e-books was not immediately intuitive.

However, this move did position our channel to participate in future e-book sales, and it did educate our in-house technical and customer service staff in how to implement digital solutions for end-users. More importantly, it allowed ABA to participate in a digital content dialogue with its members through education sessions, Bookselling This Week articles, and the new functionality itself.

Our timing was fortuitous, as the ground has shifted again. A convergence of factors has brought the issue of digital content to the front burner:

Given all of this, we now find ourselves at a critical moment. We can either build on the knowledge base that we have established and use the collective power of our trade association to facilitate the sale of digital content through our member stores, or we can cede this business to other channels.

That's a provocative statement, and it's meant to be. The sales figures from IDPF quoted above show the dramatic growth of digital content, but starting from a very small base. So how urgent is this issue? With a sputtering economy, with an unsettled supply chain, do we really need to worry about this right now?

The answer is yes.

One of our favorite charts in ABA education and environmental scanning is the technology adoption curve. 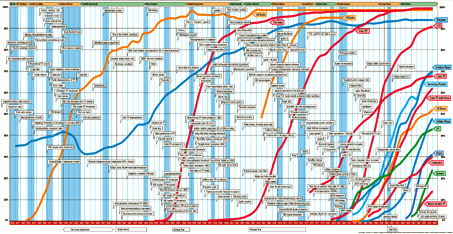 (Each line of the chart represents a major new technology. The X axis is time; the Y axis is the percent of penetration into consumer households.)

New technologies start slow, finding their way through R&D trial and errors, consumer education, and the building of a manufacturing base and necessary infrastructure. From cars to washing machines to cell phones, new technologies need time to mature and grow. Many such technologies -- maybe even most of them -- ultimately fail. Consider telephone pagers and eight-track cassettes. These were stepping stone technologies. But these technologies failed in their execution, not their concept. People wanted mobile communication and portable music. It took cell phones and the WalkMan to get the concept right. When an increase in utility meets a decrease in production cost, the line curves sharply up, and adoption explodes.

E-books, it would seem, have arrived at that bend in the road.

"Before you act consider; when you have considered, tis fully time to act." --Sallust (Populist Historian of Ancient Rome)

ABA has devoted significant staff resources to revitalizing the e-commerce tool (formerly known as BookSense.com) that it offers to members. These retooled store websites are more than capable of supporting the sale of digital content in any form we deem desirable. While there are many improvements we can, should, and will make to these sites -- loyalty program functionality, wish list functionality -- it is our strong belief that, once the migration to the new platform is complete, a meaningful digital content solution needs to be our top priority and main focus for the immediate future. It is our hope and plan to introduce such functionality no later than this summer.

In addition, once the association provides the technology, we need a significant effort to educate members on why and how independent booksellers should engage in digital commerce and to share best practices for communicating the benefits of buying digital through indie stores to the consuming public.

While building a solution through our e-commerce product should be our main focus, the association would be well served to consider the issue more broadly. As such, we suggest proceeding along three parallel tracks:

While there is no guarantee that digital content will have the impact that some are predicting, and while we should not let the issue derail us from other important work we must do, it is clear that this is something that requires serious study and attention now.

And remember, the reason the Hitchhiker's Guide to the Galaxy was so successful were the two words in giant letters printed on the cover:
DON'T PANIC!