Renee Cunningham told Bookselling This Week that this May, she’ll be opening Oliver & Friends Bookshop & Reading Room in Belgrade, Maine, with “a vision for the store as a place that brings people together.” 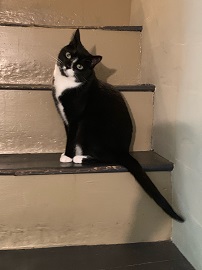 The store’s mission, as well as its name, began with Cunningham’s cat, Oliver. “In addition to being passionate about books, I’m passionate about animals,” she said. “I’ve got three cats and two dogs. Oliver is one of my cats, and he was named after Oliver Twist.”

She added that she knew she wanted a cat involved in the logo, and having that be Oliver made sense. “He’s got a great face,” she noted, “and he brings our household together.”

Cunningham said that opening a bookstore of her own has been a dream “20 years in the making.” While she doesn’t have an extensive background in bookselling, she told BTW that she did once work at a Barnes & Noble, and had been in the business world, primarily in human resources, ever since.

“But I’ve always loved walking into an independent bookstore,” she said. “About 20 years ago, I started thinking, wow, people actually do this. Someone has to own these places. And I’ve been fantasizing about it for quite a long time, but life happens, and [the timing] was never right.”

When Cunningham and her husband moved to Belgrade in 2018, she noticed that there was no independent bookstore in the town. “I couldn’t let it go. All of a sudden, this dream I’d had for so long came bubbling to the surface, and I just couldn’t let it go. So, here I am,” she said. 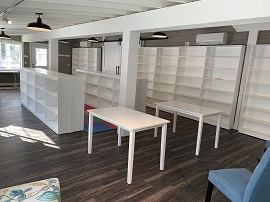 Oliver & Friends has about 750 square feet of retail space, and will be a general bookstore with some non-book offerings. While no events are officially on the books just yet, she noted that she plans to have a robust schedule of book club meetings, children’s story times, and author signings.

Said Cunningham, “The store’s mission is to be not just a bookstore, but a community gathering place where people can come and bump into their neighbor and talk about books in a really safe and inclusive environment.”

Oliver & Friends, she added, has already garnered an incredible amount of community support, with more than 300 likes on its Facebook page. The store has even involved its community in the process of selecting inventory.

“I’m looking forward to having people in the store, to talking about books and expanding my own realm of what I tend to read,” Cunningham said, noting that she tends to read general fiction herself, but will pick up anything that comes recommended to her. “I picture the space as a place for so many wonderful conversations, whether they’re about books or anything else. I’m just excited to get here and to open up to the community.”