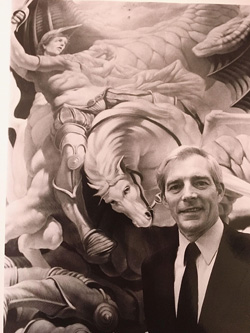 Terry Davies with the Saint George Mural inside the Earthling Bookshop in Santa Barbara.

He was born in Islington, London, England, on February 21, 1934. When he was five years old, World War II began. He was a child of the Blitz and was periodically evacuated to the English countryside to escape falling German bombs.

Terry immigrated to the United States on the ship The Isle De France in 1952. He was 18 at the time and the concept of the American dream was something he wholeheartedly believed in. At 20, Terry applied and was accepted to Stevens Institute of Technology in Hoboken, New Jersey. While at Stevens, he was introduced by friends to Penny Lucas. They were married on Halloween Day 1958, while Terry was still in school. Following his graduation in May 1961, he was offered a position as an electro-optics engineer for a company called EG&G in Boston’s Back Bay.

The couple lived in New England over the next few years, welcoming their first son (Phillip Bryan), another boy (Adam Terence), and a daughter (Thalia Maria) to the family.  The blizzard of 1966 found Terry and five-year-old Phillip trapped on a highway in rural upstate New York. Unable to get to Penny, Adam, and baby Thalia, Terry and Phillip bushwhacked across a snowy field for almost a mile in white-out conditions to reach a relative’s nearby home. He was separated from his wife for three days while she and the other children were trapped in a farmhouse with snow up to the second floor. They decided that winter that they needed to move west, so Terry took a job at EG&G in Santa Barbara, California (a place where it never snows).

In 1974, the original Earthling Books started out as a 400-square-foot stall located in the Whole Earth Marketplace on State Street in downtown Santa Barbara. Terry and Penny worked well together. Penny did all the purchasing and helped customers while Terry built the bookcases, changed the lightbulbs, and managed the accounting. Terry continued to work at EG&G full time. During that same year, while on a camping trip sponsored by UCSB, their middle son, Adam, died in a drowning accident. It devastated the family. Terry’s heart was broken.

In 1975, Penny and Terry had another daughter (Dorien Constance). They also moved the store to a much larger, 2,000-square-foot location. The new store was modeled after Bookshop Santa Cruz. It had a tea room that made great sandwiches and dozens of large glass jars filled with exotic loose teas and coffees from around the world. In the center of the new location was a stone fireplace, the image of which became the store’s iconic logo.  They welcomed customers to sit around the fire and read for a bit, have a cup of tea and a muffin, enjoy local art, and hear local authors speak. It became an institution that nurtured and celebrated independent thought. Everyone was welcome. Penny had a remarkable knack for buying great books. Terry continued to run the business side. He would hire and fire, build and fix, paint and worry. All while holding down a full-time job. They became something of a Santa Barbara power couple.

In 1979, the Earthling Bookshop moved to a larger location on State Street and Terry decided to take early retirement from his engineering job to manage the store full-time. Even when working for himself, every morning he woke up at dawn, showered, shaved, put on a collared shirt and pressed slacks, ate a bowl of oatmeal, and started working on whatever Earthling-related task needed attending.

Around this time, the redevelopment agency of Santa Barbara proposed a new shopping mall with a Bullock’s department store, to be constructed on the same site where the Earthling stood. The residents of Santa Barbara came to their aid and the measure was voted down. The bookshop was saved. Penny and Terry commissioned a stunning mural of St George and the Dragon on the back wall of the bookstore as a celebration of their victory.

Following their win over the city, in 1986 Terry ran for mayor of Santa Barbara. Penny, Terry, Thalia, and Phil walked door-to-door canvassing all of Santa Barbara’s neighborhoods for votes. Terry didn’t win, but it was close and his efforts refocused the incumbent mayor’s views of independent retailers in Santa Barbara.

In 1989, Terry and Penny opened a new store in the charming town of San Luis Obispo, about 90 minutes north of Santa Barbara. The new bookshop covered over 4,000 square feet. It had a cafe, gorgeous built-in bookcases, and the spirit of the original Earthling, just a lot bigger.

The Earthling in Santa Barbara moved for the fourth and final time in 1992. This time it was to a massive location (10,000 square feet) that had been a Woolworth’s five-and-dime store. Penny and Terry furnished it with forest green carpets, dark lacquered wood bookshelves, and brass fixtures. The old Woolworth lunch counter was transformed into a cafe and the walls were decorated with portraits of beloved authors. They had events in this store, movie nights, opera, poetry nights — an event for every taste. They donated a large front window display to a local charity every month. They started an annual Santa Barbara Book Fair, celebrating local authors and publishers. The Earthling hosted authors like Charles Schultz, Ray Bradbury, Deepak Chopra, Ann Rice, Barbara Kingsolver, Kirk Douglas, and many others.

Large retail bookstore chains took notice of the Earthling’s success. Multiple competing chains offering predatory pricing opened stores within blocks of both Earthling locations. Then Amazon came online in 1994. It was the perfect storm. Sales dropped off at both locations. The San Luis Obispo store closed first, and in 1998 the Santa Barbara store closed.

Terry and Penny retired from bookselling and eventually put down new roots in Brevard, North Carolina. He is survived by his wife, Penny Davies; his son Phillip and daughter-in-law Lauren, and their children, Leah and Adam; his daughter Thalia Brennan and son-in-law Drew and their son, Luke; his daughter Dorien Davies and son-in-law Kenny Stevenson and their daughter, Penelope. In lieu of flowers, please plant a fruit tree in his memory or make a contribution in his name to The Book Industry Charitable Foundation. He would have loved that.