Indie booksellers across the country have chosen Karen M. McManus’ The Cousins (Delacorte Press) as one of their top picks for the Winter 2020 Kids’ Indie Next List. 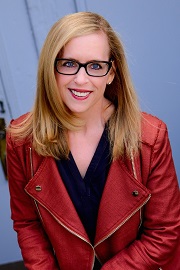 “Another stellar mystery by Karen McManus, who doesn’t miss a beat as she takes on summer vacation rather than the schoolroom,” said Sami Thomason of Square Books in Oxford, Mississippi. “When three cousins are summoned to meet their long-estranged (and incredibly wealthy) grandmother, they unearth more than just a family conspiracy. The Story family more than lives up to its name in this twisty and completely unpredictable thriller.”

Karen M. McManus is the #1 New York Times, USA Today, and international bestselling author of One of Us Is Lying, Two Can Keep a Secret, and One of Us Is Next. Her fourth novel, The Cousins, will publish in December 2020. Her work has been translated into more than 40 languages worldwide. McManus lives in Massachusetts and holds a master's degree in journalism from Northeastern University.

Here, Bookselling This Week and McManus discuss crafting a mystery.

Karen M. McManus: I was reading an article about the Kennedy grandchildren, and I started wondering what it would be like to have a last name that opens so many doors. Then I wondered what would happen if that legacy were taken away. The Story family flowed from there: a prominent family whose matriarch suddenly disinherits all her children, so that her grandchildren — the main characters of The Cousins — are living a much different and less-privileged life than their parents did at their age. The natural next question is: What would happen if this fractured family got back together? 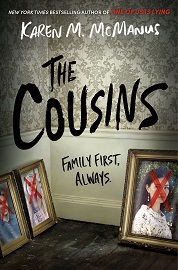 BTW: Can you talk about your writing process?

KMM: I tend to start with an idea like I just described, and then I go straight to characters. I spend a lot of time thinking about who is involved in the story and why. When I understand each character’s backstory, motivation, and stakes, I move on to the plot. I outline using a beat sheet to help me capture the big moments in the story.

Once I have a solid idea of what needs to happen, I’ll draft one point-of-view cycle at a time. For example, for The Cousins, I’d write a Milly chapter, an Aubrey chapter, and a Jonah chapter. Then I’d pause, take a look at my outline, and make adjustments as needed. The outline gets more detailed as I go along, but it can change a lot, too.

KMM: The new generation. I wasn’t initially planning to include a fourth POV, but after I’d written the first three chapters, it felt like something was missing. I realized the main characters’ parents and uncle were too important to stay in the background; they needed to be integrated into the narrative so readers could get to know them, too. At first, I thought I’d take turns featuring all of them, but with four Story siblings, that got unmanageable fast. So I settled on the character who I thought could best hold their own with the younger cast members while also advancing the mystery, which was Milly’s mother, Allison.

BTW: Like their parents, cousins Milly, Aubrey, and Jonah are each notably different. How did you craft their characters and their dynamic?

KMM: I always create in-depth worksheets for each character. It’s almost like I’m interviewing them, asking them about everything from their favorite foods to their wants, needs, and fears. Once I feel like I understand them, I start thinking about the group dynamic, which is almost like another character. There has to be what I call the Three C’s between POV characters: chemistry, connection, and conflict. If any of those are missing, the group dynamic won’t work.

BTW: Issues of money and wealth are at the core of this story. What drew you to exploring this topic in the context of a mystery?

KMM: On the surface level, I wanted to write a fun, soapy mystery with fish-out-of-water characters who suddenly find themselves attending black-tie events at an exclusive island resort, because that’s fun to write. On a deeper level, though, I thought it would be an interesting lens for examining the long-term effects of privilege. The Story family starts out with a lot of empathy and altruism but gradually turns inward, to the point that “family first” becomes more of a threat than a motto.

BTW: Several characters in the book make reference to the difficulties of “the digital age.” Can you talk more about the way the digital age impacts the cousins versus their parents? Why incorporate this idea?

KMM: Today’s teens have grown up online, and it affects all aspects of their lives. For one thing, it’s much harder to keep secrets when everything is documented and connected. The mystery that their parents are involved in could have unfolded very differently today, and I think that’s an interesting point to consider when switching between the past and the present.

KMM: I’m putting the finishing touches on my fifth book, You’ll Be the Death of Me, which will be coming out in fall 2021. It’s like Ferris Bueller’s Day Off meets a murder mystery: three old friends try to recreate an epic ditch day, but it goes fatally wrong. And I just completed the first draft of my sixth book, but I can’t say too much else about that yet.