Virginia Feito is the author of Mrs. March, a Summer/Fall 2021 Indies Introduce adult selection and a August 2021 Indie Next List pick. Feito was born in Spain and grew up in Madrid and Paris. She studied English and drama at Queen Mary University in London, and worked as a copywriter before publishing Mrs. March. 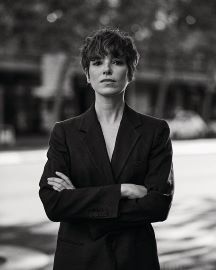 Carrie Koepke from Skylark Books in Columbia, Missouri, served on the panel that selected Feito’s book for Indies Introduce. Koepke said of the book, “It is not often that I reread a debut work almost instantaneously, but Mrs. March clawed her way over my waiting stacks and into my hands for two consecutive curl-up-and-read-the-whole-thing days. Feito expertly sets her cinematic scene and pulls you deeply into the perfection and neurosis of Mrs. March. It is a tumultuous love-hate experience with every new step into the life of this witty, presentable, but broken woman. It made me hauntingly aware of my own harsh glances at my imperfections, and how hopeful one can be for a world we merely play a role in. Dark and delicious. I can't wait to discuss Mrs. March with customers . . . perhaps over a freshly baked loaf of olive bread.”

Here, Koepke and Feito discuss the development of the author’s debut, which has already been picked up for an adaptation by actress and producer Elisabeth Moss and the Blumhouse production company.

Carrie Koekpe: Literary thrillers are a delightfully edgy experience for the reader, and I always want to know how much is original intent, versus how much the author experiences a similar unwinding. Did you begin with a carefully mapped plot, or did you get caught up in the questions and the thrill as Mrs. March evolved?

Virginia Feito: I wanted to write a thriller involving a murder that wouldn’t really be the point of the story, so luckily, I didn’t have to get into very elaborate crime plotting. I knew the big stuff early on — the beginning and the ending I was working towards. But then Mrs. March’s reactions would spring, improvised, from dialogues, or something would happen in my own life that made me want to write about it (warmly recommend cockroach writing therapy). I’m generally not a very spontaneous person, however, so I did, until the very end, keep annotating possible plot points and ideas to use as lifeboats in case I ever felt stranded out at sea. Ultimately, there were many I didn’t use as the story just naturally evolved to other places. Maybe I could use them for a sequel. Mrs. March Goes to Prison.

CK: Writing can be a very solitary and consuming experience. Were you able to read much during the writing process? If so, did you find inspiration in genre or did you aim for distraction? 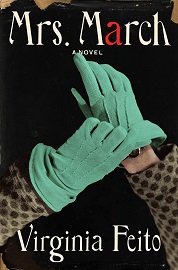 VF: I would read compulsively. I would read when I felt at all stuck with the writing, or when I was feeling less inspired (so a lot). Everything I read, watched, thought, experienced, dreamt, I tried to use in some way for the book. It was like being pregnant with it and knowing that everything that happened to me would happen to the book; everything I ingested it would feed on. So, I did try to read things that would put me in the Mrs. March “mood”; Shirley Jackson and Patricia Highsmith and Rebecca and Rosemary’s Baby; but then even when I allowed myself to read something different for distraction, like, say, Nora Ephron, I would still subconsciously try to find inspiration in it — something that might trigger a passage or a piece of dialogue or even just a sentence.

CK: It is rather on trend right now to write about writing or the publishing industry. Instead, you shift the focus onto someone impacted by the writing world. What led you to this outsider perspective?

VF: This is just how the story came out, and yet now I wonder how much of it is due to the fact that I was so ignorant of the literary and publishing world myself — I didn’t know when audiobooks come out or if book parties are in fact hosted in authors’ apartments — so I guess it didn’t feel safe for me to play around in that arena to begin with, and in any case Mrs. March (and the reader through her) had to be strictly cut off from George’s world in order to experience all the paranoia and claustrophobia.

CK: Mrs. March is extraordinarily crafted. You use both specific details (green gloves, olive bread, dinner parties) and more general atmospheric elements (quintessential New York, timelessness, a lack of close friends) to create your work. These things allow the reader to both fall into and maintain a distance from Mrs. March and her unwinding. How did you decide which elements fell into what category?

VF: I think I wanted to write a fairy tale of sorts; to create a mood readers would find familiar but wouldn’t quite place. Fairy tales are usually very detail-specific (the glass slipper, the poisoned red apple — and the Brothers Grimm described exactly what type of food the witch’s cottage was made of, down to the windowpanes of clear sugar) but take place in unspecified kingdoms “faraway” during some time in the past, and many characters are never even given a name.

Mrs. March goes about life choosing to only focus on trivial details, failing to grasp the big picture. To her, the kind of bread she eats or the brand of the wallpaper in her son’s bedroom is more important than evaluating her own behavior or developing meaningful relationships with other human beings. She purposefully displays the aesthetically striking, superficial elements of her life and hides from others (and from herself) the deeper aspects of her life and identity.

CK: Not everyone has debut work picked up by Elisabeth Moss and Blumhouse. Can you give us a glimpse into your adventure of shifting gears to work on the screenplay?

VF: This was so special for obvious reasons (mainly Elisabeth Moss in a flowery hoodie popping up on my laptop screen in the middle of a global pandemic) but also because I was pitching the movie version of Mrs. March to producers at the same time as I was finishing edits on the manuscript. So certain passages or ideas I visualized for the movie actually made their way into the book, instead of vice versa.

I absolutely love cinema, and can’t help cinematically visualizing the things I write, so I can’t wait to try to tell this story through that lens. I know you can’t be precious when adapting a book to the screen; a lot of things will have to go and a lot of others will have to be modified. Writing a script involves more teamwork than writing a novel; directors and producers and studios get a say, which is exciting — having so many talented people discussing and bringing to life a story you created is a lovely pinch-me moment. All in all, I just hope they don’t fire me.