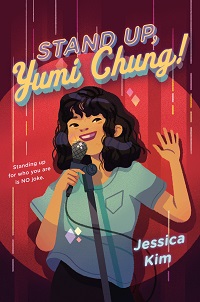 Jessica Kim is the author of Stand Up, Yumi Chung! (Kokila), a Winter Spring 2020 Indies Introduce middle-grade selection, and a Spring 2020 Kids’ Indie Next List pick.

Sarah True of Joseph-Beth Booksellers in Cincinnati, Ohio, served as a panelist for the Indies Introduce committee that selected Kim’s debut. Said True, “Yumi Chung has a dream of being a standup comedian, but her parents aren’t on board. Suddenly, Yumi finds herself with the chance to attend a summer camp with her all-time favorite comedian, except everyone thinks Yumi is someone else. This book is hilarious, heartbreaking, and heartwarming all at once. And in the end, you will absolutely be standing up and cheering for Yumi Chung!”

Kim was born on Fort Ord Military Base in Monterey, California, and earned her bachelor’s in education at UC Berkley, after which she taught third, fourth, and fifth grades in public schools for 10 years. She currently lives in Southern California with her family.

Here, True and Kim discuss the comedy and food as well as the more serious topics, like immigration and identity, that appear in the author’s book.

Sarah True: Yumi Chung made me laugh out loud over and over again! Do you have experience with improv? Also, where do you get your comedic inspiration? 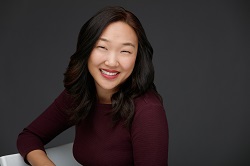 Jessica Kim: To be honest, I’ve never personally done improv before, though I’d love to try it one day, especially now that I’ve written a whole book about it. To prepare for the story, I watched untold hours of footage of other people doing improv on YouTube.

As far as comedic inspiration, Ali Wong made a big impression on me. I’ll never forget watching her stand up show Baby Cobra on Netflix. There she was, this petite Asian lady in that leopard dress and cat-eye, third-trimester pregnant holding nothing but a mic, somehow managing to get the entire auditorium utterly howling in pee-your-pants hysterics. It was powerful, it was jarring. An Asian American female comedian? Is that even a thing? Yet there she was being just that — unapologetic and polished, completely in control. Like this is what she was born to do. Something about seeing her on the screen made me feel like there’s nothing we can’t do. I had to write about it.

Another comedian that I drew a lot of inspiration from was Tiffany Haddish, who blew up around the same time with her scene-stealing role in Girls Trip. I became an instant fan and binged all her stand-up for hours. I was intrigued to learn about her childhood in the foster care system and her story about how comedy saved her life. In her memoir, The Last Black Unicorn, she shares how she was sent to comedy camp by her school counselor, and it was there that she found her calling and healing. Her wisdom, her transferring her pain into laughter, and her desire to spread positivity really moved me. She’s someone I would’ve loved to have speaking wisdom into me as a child, and so I brought her to Yumi’s life in the character of Jasmine Jasper, the whip-smart and hilarious comedy camp teacher.

ST: The comedy of this book was equally matched with many heartfelt moments. What inspired such bittersweet family dynamics?

JK: Second-generation Americans are often called upon to go above and beyond to help out in their families, whether it be translating for parents or helping out at the family business. For this reason, the bond we have with our families can be very intimate, but that proximity combined with generational, linguistic, and cultural barriers create a perfect storm for miscommunication and conflict. Many times, especially as a tween, I questioned whether my parents really knew or understood me and the things I was passionate about. My reality was so different from the families I saw on TV. We didn’t say “I love you” or hug or get allowance. The disconnect made me feel like my family was lacking in some way, like there was something wrong with us. But as I got older and had a family of my own, I realize that there was no less love in my family, we just expressed it in another language. I wanted Yumi to come to understand that as well. Through her adventures, she comes out with a clearer understanding of her family’s love for her, and, ultimately, she comes to accept both sides of her identity.

ST: The food in this book genuinely made me hungry! What would you order from the Chung’s family restaurant and why?

ST: One of my favorite things about this book was the dialogue: In addition to being hilarious, it also sounded like middle-schoolers sound. How were you able to capture each character’s voice so well?

JK: It could be because I have a 10-year-old daughter, and when I’m not writing books, I’m carting her and her friends around for all their playdates (or “hang-outs”) and activities. Or it could be the 10 years I spent as a classroom teacher. You could say I’ve been training to write this book my entire adult life.

ST: There are so many important topics addressed in this book, such as gentrification, identity, education, and immigration. What one thing do you hope children take away from your book?

JK: More than anything, I want my readers to come away with the thought that it’s okay to be yourself. In a world filled by Instagram likes and who’s following who, it’s hard to remember that you are uniquely, wonderfully made to be you.

Also, I hope my readers who struggle with perfectionism or fear of taking a risk learn that it’s fine to mess up or get it wrong. It’s about the process. What’s important is that we get up and try again and again, free ourselves to go in different directions, and be kind to ourselves when we need to.

Find out more about the author at jesskimwrites.com.