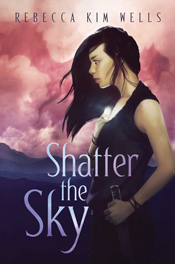 “As YA fantasy grows ever more complex, Shatter the Sky stands out as having a classic feel — familiar, simple, but impeccably executed,” says Casey Leidig of Green Apple Books on the Park in San Francisco, who served on the panel of booksellers who selected Wells’ debut for the Indies Introduce program. “Maren’s quest to steal a dragon and rescue her girlfriend is, at its heart, a politically driven story about risking it all, digging deep and then deeper, and discovering who you are along the way. I couldn’t put this down and I can’t wait for more!”

Wells earned her undergraduate degree in political science from UC Berkeley and her MFA in writing for children and young adults from Simmons College in Boston. In addition to writing, she works as a bookseller at Porter Square Books in Cambridge, Massachusetts.

Casey Leidig: Shatter the Sky's short length and spare writing makes it stand out among other YA fantasy novels. What were your influences when writing it? 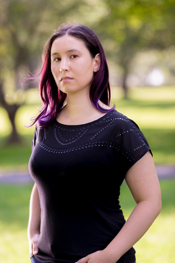 Rebecca Kim Wells: I’ve been told by several readers that Shatter the Sky has a bit of a “classic” feel to it — like the books that one might have loved if they were reading in the U.S. in the mid-1990s or so. While I wasn’t thinking explicitly about this while I was writing, it’s clear in retrospect that I was inspired by a lot of the classic children’s fantasy I read as a child — books like Tamora Pierce’s The Immortals series, Donna Jo Napoli’s Zel, Patricia C. Wrede’s Dealing with Dragons, and, of course, Gail Carson Levine’s Ella Enchanted. One thing to notice about these books is that as wonderful as they are, they’re overall very white and straight. It wasn’t until I was an older teenager and young adult that I started to see a surge of diverse fantasy in children’s and teen media — Avatar: The Last Airbender, for example (TV show, not the movie!), or Malinda Lo’s Huntress or Anna-Marie McLemore’s When the Moon Was Ours — and I started to realize that there was nothing stopping me from writing my own story into worlds like those I spent so much time in as a child.

CL: Did you have a question at the center of the novel that you wanted to explore?

RKW: Oh, so many things! But especially: What makes a hero? And what happens when you are not the “chosen one” — can you do great things regardless? Maren is a quiet homebody who at the beginning of the book is very happy to live out her life in a small village. Her girlfriend, Kaia, is the one with big dreams, who everyone believes to be destined for greatness. But when Kaia is abducted, Maren decides that she must act. She doesn’t believe that she is special, but she is determined to do what she feels is right and necessary — and along the way, she discovers inner strength and resolve far beyond what she believed she was capable of. Maren is also a person very interested in doing what is right, and (crucially) she quickly comes to understand that she isn’t necessarily always informed enough to know what the right thing is right off the bat. I admire that a lot — the willingness to admit a lack of knowledge and the openness to learning.

CL: The intrigue of this book is largely politically driven. Did your background in political science inform the structure of the plot?

RKW: To be honest, I was not a particularly motivated student while I was in college, and most of what I learned in my political science courses has long since exited my brain. When approaching the political makeup of Shatter the Sky, I was much more informed by current events. I wanted to explore the ways in which a tyrant can destabilize an empire by putting his own interests before the interests of the people. I was also interested in pushing against the idea that the existence of an empire (even in fiction) is natural or right, and the idea that something that benefits people in an upper class necessarily benefits everyone.

CL: What inspired you to make aromas a key element to the dragon lore in this book?

RKW: I like to dip my toes into nonfiction when I can, as I almost always find inspiration in the weirdness of reality. While I was starting to shape the story of Shatter the Sky, I picked up Alyssa Harad’s memoir Coming to My Senses: A Story of Perfume, Pleasure, and an Unlikely Bride. Harad’s prose on the subject of perfume is so evocative that I found myself falling down the rabbit hole of research and experimentation, and very shortly thereafter I had an entire box of perfume samples (I had never before purchased perfume). Something that stood out to me as really interesting was the way in which perfume interacts with a person’s skin and natural oils — the same perfume can smell very different depending on who is wearing it. That led me directly to the way in which aromas play a role in Shatter the Sky.

CL: I loved that Maren is a bisexual and biracial character but her identity is not at the crux of the book’s conflict. Can you talk about your approach to representation and setting the rules of normativity in this world?

RKW: One thing that was intentional from the beginning was my decision to write about an unapologetically queer protagonist in a world that doesn’t punish her for her identity. While narratives that tackle dealing with homophobia are important and necessary, I didn’t want Shatter the Sky to be one of those stories. I wanted my characters to be able to exist without having to confront that ugliness. While Maren suffers rather a lot through the story, none of it is about the fact that she’s bisexual.

That Maren is biracial was not as immediately intentional (though it’s weird to say that now — it’s such an integral part of her identity!), but definitely inspired by my own experiences. While I didn’t spend a lot of time worrying about my place in one culture or another when I was a child, I never forgot that I was different. I wouldn’t say it bothered me, but it was always there. That’s sort of the tenor of Maren’s relationship to her heritage as well. She has a well-defined relationship to her identity when she’s in Ilvera — culturally, she’s very Verran, but she looks Zefedi, and understands Zefedi culture only through her father. Then everything shifts when she descends the mountain and interacts with more Zefedi people. She starts to reckon with both the privilege and culpability that come with being of Old Zefed — a complicated undertaking, as Old Zefed conquered the land and the people that became the empire of Zefed. Empires are messy and Not Great, but how do you reconcile that with your personal heritage? Maren thinks she has an answer for this at the end of Shatter the Sky — but she might have to reconsider…

Ultimately, I set a lot of the world rules by what I found interesting to explore as a writer. To me, homophobia in fiction is not a difficult topic to take a side on. Questions of heritage, culture, and empire? Much thornier, even when exploring them in fictional settings. At the very least, I hope the journey is interesting to read!

Find out more about the author at rebeccawellswrites.com.