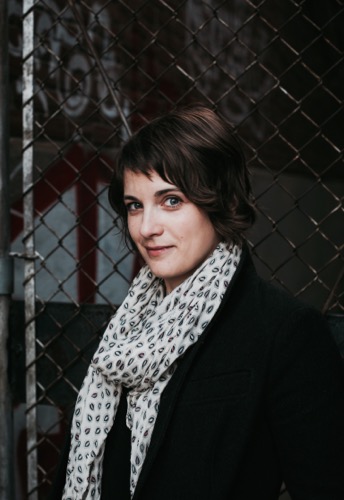 Romy Griepp of Once Upon a Time in Montrose, California, who served on the Indies Introduce Middle Grade/Young Adult Debut panel, was drawn into the novel, a murder mystery set in Kenya, not only by the main character, Tina, but also by Anderson’s strong secondary characters.

“Anderson’s ensemble cast of characters is dazzling in its scope and depth, a skill that is only exceeded by her crafting of Tina,” said Griepp. “Resourceful and loyal, Tina is a young woman burdened by the mantle of adulthood too soon, who does whatever she must to outsmart her enemies, avenge her mother, and protect herself. This is a powerful narrative that explores human resilience and loyalty in the face of unspeakable oppression.”

American-born Anderson lives in Geneva, Switzerland. While her resume includes leatherworker, bartender, and social worker, Anderson has spent the past decade working on refugee issues in Africa and throughout the world.

Griepp recently had the opportunity to ask Anderson a few questions about City of Saints & Thieves. 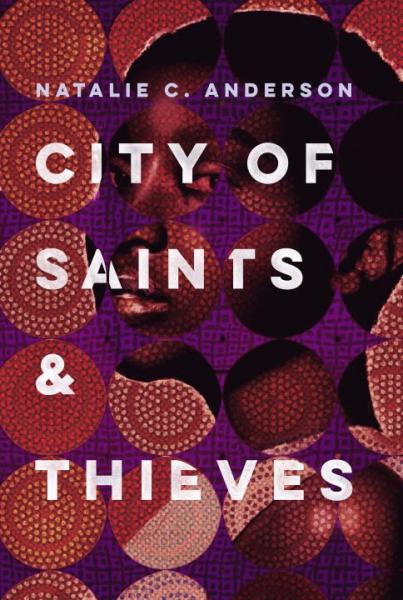 Natalie C. Anderson: For three years, my job was to interview refugees who were under consideration for resettlement to the U.S. (part of the process of vetting that you may have heard about in the news recently). I was based in Kenya, but traveled all over Africa. The stories that I heard were incredibly intense, and as a way to clear my head at the end of the day I started reading a lot of kid lit. And I’ve always loved to write, so that was a natural next step.

I wrote a super-long, plotless middle-grade book that will stay forever tucked in the back drawer. It was terrible, but writing it was excellent for my mental health! I didn’t actually start writing City of Saints & Thieves until I’d been back in the U.S. for a while and was able to reflect back on the stories I’d heard. They were truly incredible, but I wanted to be able to put them into fiction in a way that didn’t seem exploitive or make the violence gratuitous. And I knew I wanted to make the story YA, because there wasn’t anything like this out there, even though what I’d heard was every bit as compelling and engrossing as any dystopian or post-apocalyptic world.

I very purposefully made the story a thriller-mystery because I wanted the subject matter to be accessible and the story to feel exciting. I didn’t want it to feel like an issue book. I wanted people to keep turning pages and stay interested, and maybe learn a thing or two about real-life issues at the same time.

NCA: Tina came from wanting to write a story about a girl who was sort of a modern African Robin Hood. She morphed from there, but I tried to imagine what it would take for a girl to survive on her own on the often tough streets of a place like Nairobi (where I had lived). She would have to be hard, fierce, and independent, so what would make her that way? What would compel her to become a really good thief? Her back story unwound from there. While doing interviews, I met a ton of tough, smart, savvy girls like Tina who had been through some terrible things, but who were still so much more than those events. They were poets and football players and math whizzes. I wanted Tina to be like that — someone dogged by an inescapable past, but who was very much her own self-created person.

RG: There is rarely an opportunity to enjoy an ensemble of characters as varied and well-crafted as yours. How does this group work both together and individually to further the narrative as well as Tina’s personal journey? Do you have a favorite character?

NCA: Thank you! I loved these characters — even the villainous ones. It was hard to leave them! At some point I got the very good advice that you have to think just as hard about all the secondary characters’ motivations as you do about the main characters’. And in this case, on top of that, everyone needed to be essential to the mission. Everyone has to bring a skill or resource to the table (Michael has money and connections, Boyboy has his IT skills, the Goondas have muscle). Otherwise, why are they there? And under the surface, each had their own very personal motivations pushing them along, which all eventually linked into Tina’s story. Once you have that, everything sort of flows from it. Hopefully!

Boyboy is my favorite character for sure — he’s definitely the most emotionally mature of the trio (Tina, Michael, and him) and I can just hear his internal running commentary as he watches Tina and Michael fumble through trying to be emotionally competent humans. I was careful to try to avoid making him just another “gay BFF” — he’s essential to the whole plot. Tina needs his skills and, in the end, his maturity. (And on a personal note, I appreciated having him there because my favorite method of procrastination was to make Pinterest boards of fashion Boyboy would be into. The links are all on my website if anyone’s interested!)

RG: Poverty, militarization, and a massive refugee crisis are just a few of the real-world issues in Tina’s story, and one of the most compelling elements of your novel is its reality. As someone intimately familiar with African current events, especially in Kenya, why do you think this is essential to your story? Furthermore, why do you think young adult literature has a place in shaping discussion of real-world issues?

NCA: I think reality belongs in YA fiction for two reasons. One: As I mentioned above, I think some of the real-life dramas are just as exciting and compelling as fictional ones. That may make some people cringe, but let’s get real. Why should we know more about the district politics of [The Hunger Games’] Panem than we do about the politics of asylum in Europe? I think sometimes we’re reluctant to engage with current events like we do fictional ones because reality can be so much more complex and depressing, and can leave you feeling helpless. But that doesn’t mean we shouldn’t dig in there and engage and fight, because it really is possible to make a difference. And we need to do that now more than ever.

Which brings me to reason two: That reality belongs in YA. Young-adult readers are some of the most passionate, creative, energetic, and empathetic people on earth. I think people love YA because a lot of it is about fighting for what you believe in against great odds. People are looking for ways to be part of the “resistance” and equipping these readers with the knowledge and tools to fight smart battles seems like a no-brainer. The news is obviously out there as a resource, but in my opinion, nothing illuminates big issues like a small, individual, human story.

RG: In your story, as in life, choices are not always well made nor morals perfectly oriented. Questionable decisions are made by questionable people. Can you elaborate on this ethical ambiguity and how you decided to craft a novel rooted in moral complexity? Is there a moment, in your life or in the characters’ lives, that shaped this exploration?

NCA: It’s funny — for a while there, I was so steeped in moral ambiguity through listening to refugee stories that I wanted nothing to do with it. I wanted to read books and watch movies where I could firmly come down on one side or the other. Good-guy/bad-guy action movies became a big favorite. But with time to reflect, it’s impossible to get away from the fact that humans are complex creatures. We’re constantly at war with our emotional vs. rational selves. I found that especially true looking into something like the conflict in the Democratic Republic of the Congo. It’s hard to put a finger on who’s good and who’s bad. And then, of course, even among the “bad” there are regular, decent people who are on the “bad” side because of an accident of birth.

I used to hear a lot of stories from Eritrean refugees. Typically, if you’ve done something wrong in the eyes of the government, you get tossed in jail indefinitely (horrible, filthy, middle-of-the-desert jails, where torture is common). But I also heard countless stories from those same refugees about sympathetic guards who would allow captives to escape at risk to their own lives. At the end of the day, I do think that having a moral compass is essential. But moral ambiguity is what makes us human, and I would say is even what makes us empathetic to the bad guys, which is just as essential.

Learn more about the author at nataliecanderson.com.