Lana Bastašić is the author of Catch the Rabbit (Restless Books), a Summer/Fall 2021 Indies Introduce adult selection and her debut in English.

Catch the Rabbit follows estranged friends Sara and Lejla as they reconnect on a road trip from Bosnia to Vienna in search of Lejla’s exiled brother. Their journey might bring them far from home, but, as the two friends learn, they can never truly escape their pasts. 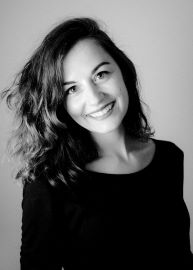 Bastašić is a Yugoslav-born writer who majored in English and holds a master’s degree in cultural studies. Her short stories have been included in regional publications throughout the former Yugoslavia and she is one of the creators of the 3+3 Sisters’ Project, which promotes women writers of the Balkans.

Chris Lee of Boswell Book Company in Milwaukee, Wisconsin, served on the panel that selected Bastašić’s novel for Indies Introduce. He called it, “Amazing, heart-wrenching, wondrous,” saying, “It’s a story of how a person can misunderstand her friend and herself and then be completely wrecked and rebuilt as she grows to a new understanding of her world. Prepare to be split in two.”

Here, Lee and Bastašić discuss the author’s inspiration for the book as well as the challenge of translating her own work.

Chris Lee: Catch the Rabbit is, to me, a novel about an intense but broken friendship, the aftermath of a war, and a woman travelling through history and geographies both personal and political to try to understand how she’s become so estranged from her childhood self. What was the initial spark for you, the very first “ah-ha moment” idea that led you to write this book?

Lana Bastašić: A very good friend from Bosnia called me to tell me that her pet rabbit had died. He was white and nameless and we used to joke that she was Alice and Bosnia was the Wonderland. The idea of connecting the two countries/lands stayed with me and I wanted to do something with it. I went back to Carroll’s book and started tracing the parallels — the fear, the violence, the exile, the eternal Who are you? question that plagues both worlds. I decided I would mirror his twelve chapters with twelve of my own in order to say something about what it was like to be growing up a girl in Bosnia pre-, during and after the war. I also realized that, being a Serbian woman with a relatively safe childhood in a predominantly Serbian town, I would need to show this privilege by contrasting it with a different story — that of a Muslim woman. This is why I needed two of them. But I never thought that female friendship in itself was in any way an exotic literary subject. It’s an everyday occurrence.

CL: Your novel is being billed as “Ferrante meets Lewis Carroll.” Another reader compared it to Toni Morrison’s Sula, and I can see similarities to writers like Rufi Thorpe and Rebecca Makkai. What other writers and books did you draw inspiration from while writing Catch the Rabbit? 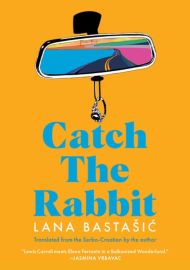 LB: Everyone keeps talking about Ferrante and, though I love her work and can definitely see the obvious parallels in terms of topic, it wasn’t my main inspiration. In fact, I took much more from Lolita — I wanted to write a road-trip novel with an over-the-top narrator who can’t face her sense of guilt and is constantly putting metaphors between herself and the world. I wanted her to try to grasp another woman, a heroine whose story is told by someone else, and who — if ever given the chance — would give us a completely different one. I even stole the name of the hotel from Nabokov, because I liked the idea of writing a character as hunting an animal. However, it seems like female friendship is still news today so that’s the tag that stuck with my novel before you could say Vladimir.

CL: You translated your own book into English. What was that process like? Was there anything in the original that you felt changed or got lost in translation?

LB: At the time, I didn’t think my translation would be published and wasn’t concerning myself with the idea. I simply had to do it — I was a Bosnian living in Barcelona. No one spoke my language. A Catalan publisher was interested in reading my work, but didn’t know a word of Serbo-Croatian. Very few Bosnian writers ever got the chance of being translated and, when they were, the translations usually went unnoticed. I realized that, if I wanted to get my book out there, I would have to do the work myself. So I sat down and started. The process was very useful because, in a foreign tongue, I could see all the dead weight that I had overlooked in my mother tongue. I went back to the original and got rid of a whole lot of words. I thought, “If I don’t want to bother translating this sentence, then it shouldn’t be in the book.”

Of course, I still believe it is better to have someone else translate your work. There is a distance and you feel more responsible. But unfortunately, if your language is considered “small,” that is highly unlikely to happen.

CL: So much of the book is about trying to go home to a home that isn’t there anymore, and trying to decide where or what home is. What’s your definition of “home” for this book?

LB: That question was one of my main concerns when writing this book. It is also a very personal one. My family has moved a lot — I was born in Zagreb, which we left first for Slovenia, then Bosnia, because we weren’t Croats and that was not a particularly welcome fact in late-eighties/early-nineties Croatia. This meant that the place I was born was not home and the place I would later call home was not where I was from. Then the whole country technically disappeared, together with the official language, so I realized, early on, how arbitrary borders and countries and nationalities are. I would go on to move as an adult, back and forth, and even today I feel happiest when I’m somewhere else.

Therefore, I don’t have a clear definition of home, and I didn’t want to provide the reader with one either. Instead, I wanted to show what it’s like to always be tied to this liminal position, the in-between, to be an outsider everywhere you go. There is definitely a longing for a home, but also a sense of anger for being robbed of one. I think for Sara the only sense of home (as something that endures no matter what and can explain us better than anything else) is her relationship with Lejla.

CL: This is a road trip novel, and I love how you capture the sights and sounds as the characters travel: the landscape, the people, even the food. You write it as almost a mythical place. Did you go out on the road at all before or while you were writing?

This is where my awesome Mom comes in and saves the day. I know nothing about cars, whereas she is an exceptional driver. I told her I would like for us to go to Mostar, spend a couple of hours there, visit the catacombs and the AVNOJ museum in Jajce, and drive all the way back to Banja Luka. She is a dentist who mostly reads medical journals and books, but she has always been immensely supportive of my writing, so she agreed immediately. It was an emotional experience to enter the AVNOJ museum (of the founding of Yugoslavia) with her because she really did experience the heyday of Yugoslavia — it denotes a happy childhood for her, a village girl with working class parents of mixed ethnicities. She was around my age when she watched it all fall apart and end in bloodshed. I felt so lucky to take this trip through Bosnia with her and see it through her eyes, but also aware that her nostalgia could never be my own. I had to look inside my own memories and emotions and draw my Bosnia from there, however dark it might come across.