Kylie Lee Baker is the author of The Keeper of Night, a Summer/Fall 2021 Indies Introduce young adult selection. 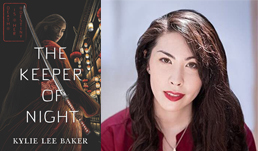 The Keeper of Night follows half British Reaper, half Japanese Shinigami Ren Scarborough on her quest to find her place in the underworld of 1890s Japan.

“What a vivid and chilling story,” said Kim Brock of Joseph-Beth Booksellers in Cincinnati, Ohio. “For the first time in my life, I was thrilled to be creeped out. Kylie Lee Baker has created this world based on Japanese mythology, and it is terrifyingly good. You get sucked into the darkness that this story brings and you want to stay. The writing is good, the characters are dynamic, and you feel this story in your core. Excellent debut! Grab a flashlight, a blanket, and dive into this haunting tale.”

Kylie Lee Baker grew up in Boston and has since lived in Atlanta, Salamanca, and Seoul. Her work is informed by her heritage (Japanese, Chinese,  and Irish) as well as her experiences living abroad as both a student and a teacher. She has a BA in creative writing and Spanish from Emory University and is pursuing a master of library and information science degree at Simmons University. In her free time, she plays the cello, watches horror movies, and bakes too many cookies. The Keeper of Night is her debut novel.

Kim Brock: The premise of The Keeper of Night is unique, how did you come up with the concept?

Kylie Lee Baker: Underneath all the monsters and magic, The Keeper of Night is a story about being biracial. I had a lot to say about that topic and desperately wanted to write a biracial character to share those thoughts through fiction, but I avoided it for a long time because I was taught in school that it’s bad practice to make your characters too much like you (now, I think it’s a bit more complicated than that). My first novel had a Korean American male protagonist for this reason — I wanted to speak to being Asian, but also put some distance between me and my character. When that book didn’t sell, and as I got to know more of the diverse book community and the fantastic books written by authors who shared identities with their characters, I felt ready to write about being biracial, but in a way that was exciting to me — that is, dark and creepy fantasy!

At the time, I was also beta reading an early draft of Girl Giant and the Monkey King by Van Hoang, which features Vietnamese mythology, and I was inspired to learn more about my own culture’s mythology. Lastly, I was hugely inspired by Black Butler, an anime that takes place in Victorian England and has reapers as minor characters. I loved how haunting and heartless that setting felt; so I wanted to start my book in a similar way.

KB: This book is about dualities: life and death, light and dark...Ren's own heritage. Where did the inspiration come from?

KLB: The focus on Ren’s dual heritage came from my frustration at experiencing gatekeeping and objectification from people on both sides of my heritage. The focus on light and darkness came from learning about Yomi — Japan’s pitch-black underworld — which forms the basis of a Japanese legend of love and darkness similar to the legend of Orpheus and Eurydice. Lastly, the focus on life and death comes from my own morbid interest in afterlife mythologies. What’s interesting is that I never intended to set up so many parallels, but throughout the book it becomes clear that none of these pairs are actually polar opposites. All of them intersect.

KB: Ren is biracial, with a Japanese Shinigami mother and British Reaper father. In your opinion, why is representation so important in children's and YA literature?

KLB: Elizabeth Yeoman conducted an ethnographic study about how children who are only exposed to white heroes in books and films start to associate goodness and attractiveness with whiteness. Children who don’t see their cultures represented are getting the implicit message that they don’t matter, that they can never be protagonists. Mixed-race children are still so sorely underrepresented or misrepresented in children’s literature. A lot of the more popular depictions of mixed Asians in children’s books are not actually written by mixed Asians and do not capture the complexity, beauty, and trauma of being mixed race.

So many mixed Asian teens have messaged me because they’re thrilled to see a book about mixed Asian identity by a mixed Asian author. As much as I appreciate them reaching out, it breaks my heart that finding this kind of book is so rare and special for them that they think it’s worth getting excited about. Children are starving for authentic mixed-race representation, and I’m so thrilled to see more of it coming in 2022 in books like Only a Monster by Vanessa Len and The Lost Ryū by Emi Watanabe Cohen.

KB: Let's reminisce: You get the call that your book is going to be published, what was your reaction? How did you celebrate?

KLB: I had to try my hardest not to think about it for two hours because I was at a brand-new job and didn’t want to cry at my desk on my second day there. I was pretty shocked, because my only friend who had a book deal at the time said that she’d had a phone call with an editor before an offer was made; so I thought that was how it always worked. I hadn’t talked to an editor yet, and when my agent told me about the offer I kept confirming: “You mean an offer offer? An offer to buy my book? Not an offer to talk to me first?” My celebratory meal involved scallops and ice cream (separately, of course).

KLB: I’ve done some weird, creative recipes recently, but my most popular cookies are definitely my 72-hour chocolate chip cookies! I use a mix of bread flour and cake flour and let them chill for 72 hours before baking. I shower them in sea salt, too. You wouldn’t think that so much salt on a cookie would be good, but it’s stellar.

Find out more about the author at kylieleebaker.com.