Kelly Fernández is the author of Manu, a Summer/Fall 2021 Indies Introduce middle grade selection and November/December 2021 Kids’ Next List pick. 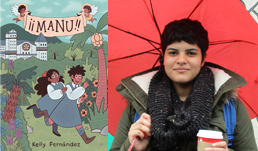 Kelly Fernández is a cartoonist who was born and raised in Queens, New York. Her family is from the Dominican Republic, whose folklore and culture she draws inspiration from. Her debut graphic novel Manu is forthcoming from Graphix and has received starred reviews from Kirkus and Booklist. Her work has been featured in a number of comic anthologies such as Dates, Mine!, and Tales from la Vida. She has also done illustrative work for Cicada magazine and received the 2017 Cupcake Award from the Chicago Alternative Comics Expo (CAKE).

Hannah Amrollahi of The Bookworm in Omaha, Nebraska, served on the panel that selected Fernández’s book for Indies Introduce. Here, Amrollahi and Fernández discuss the author’s debut.

Hannah Amrollahi: Manu and Josefina both have such distinct designs as does the setting. How did you decide how each character would look?

Kelly Fernández: When designing Manu and Josefina, their appearances came first and then I figured out their personalities second. Manu always looked rough around the edges — which set her up to be the outcast who sticks out from the preppy girls at her school. That includes Josefina, whom I drew as cute, stylish, and neat.

As a reader, I love stories with unlikely duos and watching them figure out how to work together. Manu and Josefina were supposed to be rivals in my first drafts, who were complete opposites and both equally good at magic. Throughout the book they were supposed to constantly bump heads. However, as I worked on their backstories, Josefina turned into Manu’s best friend/love interest.

HA: Manu brings together magic, queerness, and spirituality in such a beautiful way. What inspired you to bring together these elements for the story?

KF: I’ll be honest and say I put these things together mostly for myself: Since around third grade I was terrified of being anything that wasn’t heterosexual. I grew up surrounded by people who had nothing nice to say about the queer community, and it gave me a low self-esteem that I still struggle with today. On top of that, somewhere in my adolescence I lost my pride in being Dominican. I really just wanted to fade into the background.

Making my main characters queer and creating a world revolving around my culture’s spiritual beliefs were ways to explore aspects of myself that I wasn’t confident about. This story puts those insecurities to the forefront and combines it with fantasy, a genre I adore.

HA: Some graphic novels are a collaboration between a writer and illustrator, but you do both! What is it like to combine the text and graphics and how do they come together?

KF: Sometimes the two come together naturally, and other times it could be difficult. Writing things down is a necessary step in my process because otherwise the small details get lost. So I’m constantly going back and forth between thinking visually and thinking textually. It gets tricky when it’s time to take a scene that I “see” in my head in pictures and translate it into words. There have been instances where I draw very loose panels of a scene in my sketchbook because the words overwhelm me. I’ll take a break and come back later when I’m recharged.

HA: Manu, unlike some young protagonists, has many wonderful adults in her life. How did you fill the book with the many memorable side characters?

KF: The side characters are mostly based on people I’ve interacted with throughout my life. It was important to me to show both adults and kids who don’t always say or do things that are “nice.” As a kid, I remember feeling wronged many times by the way people treated me. As an adult, I can better understand why people acted certain ways, forgive/accept what happened, and then go from there.

I wanted to reflect that in this story: There are characters who do wrong but seek forgiveness, coming from a place where they didn’t know better or thought they were doing right. I hope readers connect to this and it helps them be understanding of others.

HA: This is your debut novel. What are you most excited about sharing with readers about Manu?

KF: I would like readers to have fun and enjoy the story. Yes, there are sad and scary moments that the characters go through, but I think that makes you cheer for them all the more. I dedicated the book to anyone who feels lost in a deep, dark cave, and I truly mean that — I hope the story reaches readers who are lonely, sad, and confused, and gives them encouragement to keep going.

Find out more about the author at www.kellyfernandez.net.