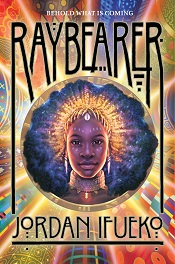 Jordan Ifueko is the author of Raybearer (Amulet Books), a Winter/Spring 2020 Indies Introduce young adult selection a and Spring 2020 Kids’ Indie Next List pick. (Note: This title’s on sale date, previously set for spring 2020, has been pushed to August 18, 2020.)

In Raybearer, Ifueko, a Nigerian American writer who lives in Los Angeles, weaves West African folklore with other multicultural histories to create the fantasy world of Aristar.

“Raybearer is gorgeously written and filled with legends, mystical powers, blood oaths, and curses,” said Jackie Jou, formerly of Mysterious Galaxy Bookstore in San Diego, California, who served as a panelist for the Indies Introduce program. “It begins in a fable-like setting that unfolds into a complex world of secret histories and betrayals. Tarisai was raised in a mysterious fortress, where everyone around her feared her and left her in isolation. When Tarisai is sent to try out for the royal council with a terrible task, she discovers more about herself and her capabilities, gloriously coming into her birthright and legacy. The world-building is phenomenal and intricately crafted and I can’t wait for the next book in the series!”

Here, Jou asks Ifueko about her world-building inspirations and plans for the next book in the series.

Jackie Jou: The world you portrayed in Raybearer is incredibly rich and vibrant. What were your inspirations in writing such a world? 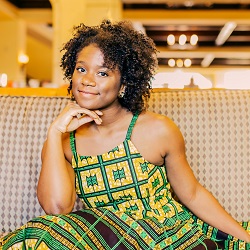 Everything I write is a compilation of every story I’ve ever loved. Some of the mystical creatures and magic systems are influenced by favorite West African folk tales, and others by the books I grew up with, like the dreamy fairy tales of Gail Carson Levine. The realms within Raybearer are all loosely based on real-world cultures. Oluwan, for example, is based on the massive and ancient kingdom of the Yoruba, my mother’s Nigerian tribe, and Songland is inspired by Joseon-period Korea. It was easy to get a bit lost in research. While my parents are Nigerian immigrants, their experience of West Africa was of course very modern. The world of Aritsar has an ancient fantasy feel, and so I had to dig for non-colonial (read: antiracist) literary sources about West Africa in older periods. As is apparent in Raybearer, ancient West Africa prioritized a rich oral tradition for history and storytelling, which sometimes made it difficult to find written sources, but I had a lot of fun searching!

JJ: In your book, the characters and cultures represented come from all over the globe. What made you want to write such an international and inclusive fantasy?

JI: The more I wrote, the more I thought of Raybearer’s world as a thumping house party to which I could invite anyone I wanted — including people groups that fantasy has ignored as a genre. I grew up hearing so many excuses for why race inclusivity in fantasy worlds wasn’t “realistic.” And I thought...um, what? Isn’t the point of fantasy that we’re building these worlds from scratch? If dragons are plausible, why not Black fairies, Yoruba emperors, and Korean princes?

JJ: Which character in the book do you identify with most? And did any of your own life experiences make their way into the novel?

JI: No one believes me when I say that I rarely set out to base characters on real people, because my life experiences always weasel their way in! Tarisai and I certainly have a lot in common. My childhood was a patchwork of intense, loving friendships and stretches of isolation, as well as struggles with identity in relation to parental figures. But while I identify strongly with her, I see streaks of myself in all the characters — Kirah’s conflict with her conservative upbringing, Dayo’s loyal affection, The Lady’s sense of entitlement. They’re all part of me.

JJ: Who are your favorite authors and books?

JJ: What are your plans for the next book in the series?

JI: The next book has a very different feel than the first — we’re dealing with a Tarisai who has grown up a lot. Having a loving family is no longer her deepest ambition — she’s burning to right systematic wrongs she was blind to before, and is haunted by problems too big for one girl to solve. I love her (literal) journey to hell and back and I hope readers will, too!

Find out more about the author at jordanifueko.com.