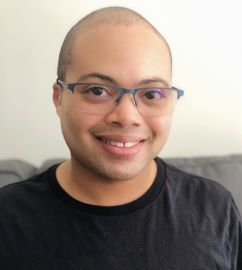 When a discriminatory law forces Spencer’s soccer coach to bench him, Spencer has to make a choice: stay on the side lines or publicly fight for his right to play, which would mean coming out as transgender to everyone—including the guy he’s falling for.

Fitzimons grew up in the suburbs of Washington, D.C., but spent his summers in England and France where he became an avid soccer fan. He currently lives outside D.C. and works for an arts advocacy nonprofit in the city.

Brein Lopez of Children’s Book World in Los Angeles, California served as the chair for this season’s kids’ booksellers panel. On The Passing Playbook, he said, “Isaac Fitzsimons has scored a goal for Trans Boy Joy. This teen rom-com set amid high school halls and soccer fields was a delight from start to finish. Explorations of identity, faith, friendship, family, and competition give every character a chance to grow and to shine. I can’t suggest it highly enough.”

Here, Lopez and Fitzsimons discuss the range of characters and various issues they struggle with, while still holding onto the aforementioned Trans Boy Joy central to the story.

Brein Lopez: The Passing Playbook has a full beautiful spectrum of BIPOC and LGBTQ characters that elevate the story and each other. Why was it important for you to have this representation and how did that diversity help your world-building as a debut author?

Isaac Fitzsimons: Growing up I was lucky if a book had a Black or gay secondary character, and even then, they could never be both at the same time! So, when I started writing, I didn’t have very much diversity in my own works because I didn’t see it in the books that I had read. Making the decision to include diversity was giving myself permission to draw from my own life experiences more authentically and put it on the page. Looking back at the media I consumed, I internalized the idea that people like me couldn’t be the main character, which is pretty horrific when you think about it. As a writer for young people, it’s important for me to show all kids, but especially BIPOC and LGBTQ youth, that they are the heroes in their own story.

As for worldbuilding, often in trans narratives the trans character is isolated from their community and estranged from their family. I was very conscious that my set-up with Spencer starting at a new school was following this pattern, which I think has the potential to be harmful for trans readers. When fleshing out Spencer’s world, I wanted to show that he was attached to the trans community and had strong family ties. One thing that I want to mention is that while the book does contain explorations around Spencer’s racial identity, he still has a lot to unpack there. Honestly, this was intentional because it’s a lot to ask a fifteen-year-old Black, biracial, queer, trans kid growing up in conservative rural Ohio to be completely secure and confident in all their identities! 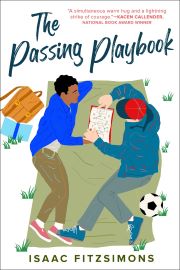 BL: YA tales of trans teen experience, like in life, can often focus on the harsher realities of high school life. Readers are prepared like Spencer and his family for the possibility of tragedy, but what they get instead is an exploration of trans boy joy. Why was it important for you to write Spencer an uplifting story of teen romance and friendship while still honoring the pressures and truths of passing?

This was important to me for a couple reasons. First, I think readers should have options about the types of books they want to read. And second, I don’t think we need to see those scenes of trauma played out over and over again in order to empathize with someone different from us. Instead, I led with the idea that joy which reflects our common humanity plays a much bigger role in fostering empathy.

BL: More than just a rom-com, The Passing Playbook is a true sports romance. You capture vividly the most important parts of athletic competition and soccer from the coach and school bureaucracy to teamwork and leadership. With the rights of trans athletes to compete in sports under constant threat, why is sports an essential part of Spencer's and Justice's story? What message can it convey to readers?

IF: I think in the U.S. soccer is treated more like a rec game kids play for fun on the weekends, but in other parts of the world every kid who kicks a ball dreams they can be the next David Beckham or Lionel Messi or Cristiano Ronaldo. I definitely drew more on the romanticized idea of soccer as an equalizer where all you need is a ball, a net, and hard work to succeed.

I’m so glad you brought up the current threats to trans athletes. When writing the book, I certainly couldn’t imagine that we’d be where we are now. If I’m being completely honest, I thought we would have evolved much more in our understanding and acceptance of gender diversity in all areas of life.

Even as someone who is not gifted athletically, I believe that sports can be an opportunity for people to feel powerful in their bodies, which is important for everyone, especially for trans youth who may have a complicated relationship with their bodies. Beyond that, for Spencer being on a team was a place where he belonged, and Justice saw sports as a way to escape his difficult home life.

Denying trans kids the opportunity to play sports is cruel, plain and simple. I hope that readers come away with the message that these laws aren’t protecting anybody, they’re just targeting the most vulnerable.

BL: Faith is an important part of Justice's family life and an essential part of his character. His journey also includes a form of passing. Why were personal faith and religious bigotry important elements for your story?

Unfortunately, many people do grow up with that message, so I wrote Justice for them. I was very intentional in making Justice’s journey less about coming to terms with his sexual orientation and more about finding the courage to fight against what he was taught growing up.

I sometimes worry that Justice’s depiction as a gay kid from a religious family will be misconstrued as a critique against religion. Really, it’s meant to be a critique against people who wield religion like a weapon to control others.

BL: Your book debut was a deeply satisfying and pleasurable read. I wanted to spend more time with all of these characters, both the teens and adults. What were your goals in telling this particular story? Is there more of Spencer and Justice's story to explore?

IF: Thank you so much! I have a real love for all the characters and even now still get ideas about what they could be up to, so revisiting them is tempting!

Ultimately, I wanted this to be a book that readers can find comfort in. I hope that after reading people understand how much work it takes to truly make yourself a safe space for others to feel comfortable to confide in you.

As for returning, I feel like Spencer’s story is just beginning. That said, I don’t have plans to revisit the story right now, but who knows!

Find out more about the author at isaacfitzbooks.com.