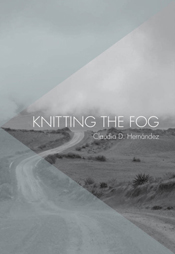 Claudia D. Hernández is the author of Knitting the Fog (The Feminist Press at CUNY), a Summer/Fall 2019 Indies Introduce adult debut.

Born and raised in Guatemala, Hernández immigrated to Los Angeles when she was 10. A photographer, poet, editor, educator, and translator, she received her MFA in creative writing from Antioch University Los Angeles. Knitting the Fog, which won The Feminist Press’ Louis Meriwether First Book Prize, chronicles Hernández’s journey to the United States with her mother and sisters.

Indies Introduce panelist Anne Holman of The King’s English Bookshop in Salt Lake City, Utah, recently had the opportunity to talk with Hernández about her memoir.

Anne Holman: Knitting the Fog is about three generations of women, each strong and weak in their own ways. Even through fights and sadness and very tough times, you all love each other and continue to love each other now. What was it that bound you to one another in spite of all the hardship? 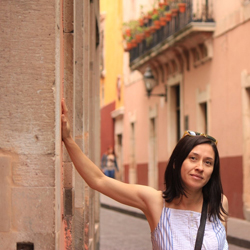 Claudia Hernández: Hunger. Literal and symbolic hunger bound us together. When my sisters and I were growing up with my mother, we never needed anything except the love of our father. My father was an alcoholic who didn’t know how to treat or love my mother and us. This was the love we craved and needed the most when we were young. Our own father caused this symbolic hunger. The literal hunger was later caused when my mother went to el Norte. We were left under the care of my grandmother, Mamatoya, who was also raising her own kids and two other grandchildren. Food was scarce in her home. My mother’s monthly checks sent from the U.S. didn’t last. This caused a lot of drama in the house.

Hunger bound all of us, including my mother and her mother, throughout the years. When Mamatoya abandoned her at the age of seven, my mother raised herself on the streets selling fruit to buy her own shoes, clothes, and toys. This made my mother tough and street smart even though she only has a second-grade education. And Mamatoya became a cook for the military at a young age to help feed the family. It’s hard to pacify this hunger. I, on the other hand, have learned to love and respect these women along with their imperfections. We are aging; Mamatoya, our matriarch, is now 85 years old and loves to eat ice cream and chocolate cake. I love that every time I visit Guatemala, she still wants to cook me a meal from scratch. I could never go hungry with her anymore. And the symbolic hunger I once experienced with my mother was pacified when I was 10 years old, when she married Amado, my stepfather. Some scars have healed while others remain open, and that’s okay. We are all perfectly imperfect.

AH: Poetry is spread across your memoir, giving the reader interesting pauses throughout the story. Why did you construct it this way?

CH: Poetry is like dessert to me. I can eat it three times a day. For this particular book, it was like having it in between meals, poetry amongst prose, or in this case, amongst my narrative essays. Before Knitting the Fog, I had already completed a poetry manuscript, but I hadn’t submitted it to any press for publication. So when I started putting together Knitting the Fog, I decided to add some poems in between the chapters. Some of these poems complemented the narrative essays perfectly. It made the narrative essays flow better with each poem in between. I’m into experimental writing so I decided to take a chance with my manuscript and the Feminist Press. I don’t write in linear narrative, either. My writing falls into fragmented narrative. I was so ecstatic when the Feminist Press chose my manuscript as the winner for the Louis Meriwether First Book Prize. Never did I imagine that they would publish my hybrid manuscript, which also includes the Spanish translations to some of my fragmented poems. It’s a dream come true.

AH: “Knitting the Fog” is also the title of one of the poems in your memoir, appearing when your family is about to head to the United States, and in it you describe having to knit your old life into the new. It seems that from an early age you were trying to knit many other things together — your mother, your family in Mayuelas, and your family in Tactic. Can you talk a little about that?

CH: Yes, this is the midpoint of my memoir, where one life is left behind and new life begins. When we lived in Tactic and Mayuelas, we witnessed domestic violence between my parents. This was something that my mother couldn’t prevent because my father was an alcoholic. The only way she was able to escape that life was by fleeing to the U.S. and leaving us behind under the care of Mamatoya and Tía Soila. When she returned three years later, she took us with her back to the U.S. illegally, and there we met Amado, her new husband. We began a new life there, in a loving and safe environment. But I never want to let go of the past.

The three years I lived without my mother in Tactic and Mayuelas under the care of Mamatoya and Tía Soila taught me how to be resilient and determined. Being raised by these matriarchs instilled in me the true meaning of feminism. I also try to knit the love and forgiveness between my mother and my grandmother into the book. Their relationship was severed when my grandmother abandoned my mother at the age of seven. My mother has suffered from abandonment issues, just like I have, and throughout the book I try to knit these painful stories together to find closure and forgiveness within. Families are not perfect. And my family is one that is far from that.

AH: Part three of your memoir is called “The Promised Land,” and yet when you arrived in Los Angeles you were still considered “different” from other Latinx kids because you didn’t speak Spanish. How long did it take before you felt like part of your community?

CH: I never really felt part of my community; it wasn’t until I was in high school that I felt that I was part of something. My sister Consuelo was a junior when I was a freshman. I got to hang out with her and her friends for two years. I felt special and welcomed. After Consuelo graduated, I had my own group of friends and was well-liked and respected even though I still had an accent. When I was a junior and senior, I was part of the yearbook staff and became the senior photographer. I even won a photography award for my work, which helped my self-esteem. After high school, I got married and had my daughter. I was working full-time and going to school part-time while being a new mom and a new wife at a very young age. I was too busy to have the need to be part of anything. I didn’t have time for my art, either. The only art I did was in the art classes I took in my community college and in my undergrad courses.

But as soon as I graduated, I had the time to be an artist and a writer, and that’s when my roots deepened in my community. I began showcasing my photography, which focused mainly on my indigenous background and other indigenous cultures from South and Central America. I began writing socially conscious poetry and the narrative essays for Knitting the Fog. I began submitting these and getting published in literary journals across the country and abroad. My community of writers grew as well. I want to clarify one thing though: now at an older age, I don’t have to assimilate to be part of any community. I am a Chapina, a very proud indigenous Chapina from Guatemala who speaks Spanish using voceo and I speak English with an accent. And I am perfectly okay with that.

AH: Your journey north is fascinating because you were so young when it happened, and the way you saw things was so different from how your mother or sisters saw them. Did they help you recreate the journey?

CH: You’re so right about how differently we saw things. Sometimes we still argue about how we remember certain experiences. One example is Sindy’s crush on Javi, the coyote who helped us cross over from Mexico to the U.S. I remember how shy Sindy would get around him, but she swears that never happened! And I remember it so clearly. My family also helped me with certain passages in the book. Our journey was exactly 30 years ago, and I had to remember places where we stayed, the flophouses, the different states in Mexico as we crossed them. My family helped me outline our journey. They also helped me remember the conversations we had with each other and with Tía Soila and Mamatoya. They also helped me remember the details of the stories Mamatoya and Tía Soila told about la Siguanaba.

Memory is tricky. Every time we recall a memory it can change unless we write it down. Writing this memoir has been as if I have stamped or tattooed my past onto my skin. I have no regrets.

Find out more about the author at claudiadhernandez.com.