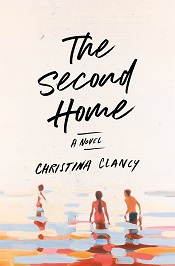 Christina Clancy is the author of The Second Home (St. Martin’s Press), a Summer/Fall 2020 Indies Introduce adult debut and a June 2020 Indie Next List pick.

“After the unexpected death of their parents, three siblings are forced to deal with the events that divided their family at their summer home in Cape Cod years ago,” said Maxwell Gregory of Lake Forest Book Store in Lake Forest, Illinois, who served on the panel of booksellers that chose Clancy’s book for Indies Introduce. “Each sibling is bonded to their Cape Cod summers and the home that evokes so many stories and memories of their childhood. How do you sell a treasure? As they struggle to untangle years of hurt, secrets, and betrayal, you ache for them to save their home and themselves.”

Clancy has taught creative writing at Beloit College in Beloit, Wisconsin, and holds a PhD in creative writing from the University of Wisconsin-Milwaukee. She grew up in Milwaukee — spending a few weeks each summer visiting her grandparents on Cape Cod — and currently lives in Madison, Wisconsin. 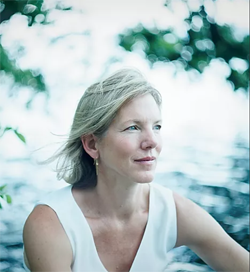 Maxwell Gregory: What inspires you to write and who has been the biggest influence in your writing career?

Christina Clancy: Inspiration usually comes when I least expect it. It might be in the form of an odd detail, a what-if situation I’ve never considered, an overheard line, or an image that strikes me as compelling. These things hit me sideways, like little puzzles I need to work out on the page.

When I taught creative writing at Beloit College, I’d try to help my students discover this kind of inspiration with a “battle of the details” assignment. I’d ask them to go somewhere that is not familiar to them, and out of their comfort zone (but safe), and to linger in that space and make a list of all the details that strike them as interesting or odd. Our senses are most alert in new and strange situations, and writers need to develop a sort of antennae for the hyper-specific and unexpected detail. I had students hang out in places like a hospital waiting room, the lobby of a busy tax prep office during tax season, a wig salon, the vacuum repair shop, a fraternity house. I even had a student accompany a tow-truck driver on his shift. They’d compete and vote on the best, oddest detail. As the semester progressed, I’d see how my students learned to see the world like writers.

As for who inspires me to write, I’d have to tip my hat to my favorite short story writers. Plot is hard. I couldn’t have pursued novel-length material without first discovering that short stories are satisfying with small epiphanies and changes — or as Henry James said, a “chord change.” Birds of America by Lorrie Moore really got me back into writing. Not much actually happens in her stories, yet there’s a powerful narrative undercurrent, and she inspired me to try writing with humor. Some of my favorite short story writers are Jean Thompson, John Cheever, Stuart Dybeck, Louise Erdrich, Stephanie Vaughn, AM Homes, Mary Gaitskill and William Gay... I have so many favorite short story writers that it pains me to not include them all. I just love the craftiness of the form.

MG: I found the sense of place to be a powerful theme in The Second Home, both in Milwaukee and Cape Cod. Can you talk about the why place is important to you and the impact it had on your writing the novel?

CC: I’ve never thought of this before now, and I’m sorry to turn this into a therapy session, but when I was a kid, my parents divorced and we moved very abruptly from Denver to Milwaukee. I went from mountains and bright sunny days to prairies, lakes and harsh winters. Perhaps the shock of that experience heightened my awareness of place — and of moments when I feel out of place.

I’m a big fan of character-driven stories, and characters are necessarily influenced by the places they find themselves. You get to know them when you see how they interact not only with each other, but also with the weather, scenery, culture, and socioeconomic circumstances of a given area. Plus, places hold memories. Like my character Michael, I’m a deeply nostalgic person. That’s why I like the tagline the press came up with for the book: “Some places never leave you.”

MG: When returning to a second home, there is always the anticipation of rediscovering all the unique and beloved treasures you have grown up with, yet an outsider can only see the imperfections. How is this true of the Gordon family’s home?

CC: Second homes are memory bombs. People go back to them again and again, and when they stay in the family long enough, they are reassuringly constant, even as the inhabitants go through various stages of life. It’s hard to change and improve a second home, even when they need repair or suffer from disuse. What may seem imperfect, like the faded wallpaper in the Gordon’s home, is a symbol of consistency across time and generations. To keep things as they are is to adhere to the past.

The objects in second homes are powerful because they have stories associated with them. They reflect the personalities and the passions of the people who use them, as well as the ways in which the inhabitants spent their precious and coveted leisure time. Connie, the mother, has her books, and she’s often seen in the living room, where she can relax and read. Ed, the dad, has all the random tools in the old barn that he’d inherited from his grandfather. That’s the place Michael goes to commune with Ed’s memory. I found Ed and Connie’s bedroom to be a very symbolic space. I purposefully provided each of the siblings with an opportunity to sleep in that room as a generational rite of passage. I remember how strange and wrong it felt to sleep in my grandparent’s bedroom in their Wellfleet house after they died, yet it felt necessary to do so.

MG: Did you know the storyline and ending before you started writing, or did it evolve as you wrote?

CC: I wish I knew the ending ahead of time. I heard Joyce Carol Oates once say that she never starts writing until she knows the last line. I have all kinds of admiration for that approach, but I can’t pull it off. I think I’ll always be a “pantser.” This might sound strange, but I think this is a form of optimism. I like to believe that my future self will be better able to come up with more creative ideas and solve the difficult narrative problems I face in the present. It also frees me to improvise and make radical changes to a draft.

When I began working on the novel, I knew that each character would want the house, but I didn’t know who would get it. I had to interview a lot of estate and probate specialists to try to figure out what might logically happen, and I spent a lot of nights in bed trying to work out possible endings in my mind. A lot of writing happens away from the keyboard, but then again, there’s something magical about actually writing into a twist in the story. It’s amazing how a character can surprise me. That, for me, is the most fun part of writing. Sometimes I’ll gasp and think, “I can’t believe they just did that!”

MG: Do you have plans to write another novel? What will it be about?

CC: How perfect that you asked this question, because I literally just finished my second novel, and I swear that steam is rising from my keyboard. When I pitched the idea to my editor, I was worried she would think I jumped the shark, but she was completely open to it and I’m so grateful, because I had the very best time researching and writing Shoulder Season.

The novel is set mostly in 1981 in the old Playboy Resort in Lake Geneva, Wisconsin. I’ve always been fascinated that a small town in Wisconsin could attract Hugh Hefner, celebrities like Sonny and Cher, and famous musicians who were shuttled around in a stretch Rolls Royce. Alpine Valley, the music amphitheater where Stevie Ray Vaughn died, is just a few miles away, and the resort had a world-class recording studio in the basement. The women who worked as bunnies were mostly from small towns in Wisconsin. They were the daughters of farmers and factory workers, and I wondered what it must have been like to be able to access a whole different world with an entirely different culture just miles from the place where you grew up.

We don’t usually imagine small Midwestern towns as places that are sprinkled with stardust and imbued with sex appeal, but my character Sherri Taylor grew up in East Troy, the next town over (this is where my husband’s family is from). She becomes a bunny at a very vulnerable time in her life. Because she had a stunted adolescence, she abruptly comes of age in the resort. She’s only a bunny for eight months, but the experience, and the events that lead to a tragedy, will profoundly impact the way she sees herself and the place she grew up and considered home for the next 40 years. Despite the shift in topic, I can’t tell you how happy I was when my editor read the final draft and said that it very much reads like a “Christina Clancy novel.” I can’t wait to share it with readers.

Find out more about the author at christiclancywrites.com.