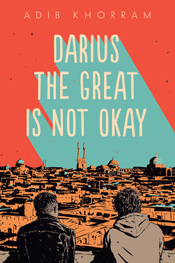 Adib Khorram is the author of Darius the Great Is Not Okay (Dial Books), an Indies Introduce Summer/Fall 2018 selection for young adults and a Fall 2018 Kids’ Indie Next List pick.

Khorram studied design and technical theater at Southern Illinois University – Edwardsville before attending Vancouver Film School. He currently lives in Kansas City, Missouri, where — in addition to writing books — he works as a graphic designer, videographer, and projectionist.

In Khorram’s debut, self-described “fractional Persian” Darius visits Iran for the first time with his parents and little sister, where he learns more about his family history — and himself — than he ever expected.

Kathleen March of Anderson’s Bookshop in Downers Grove, Illinois, served on the panel that selected Khorram’s debut for the Indies Introduce program. Here, the two discuss Darius the Great Is Not Okay. 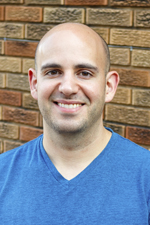 Kathleen March: Congratulations on a stunning debut! This was a one-sit read for me — a story that I didn’t want to leave. As a debut author, what is your greatest fear about releasing this book into the wild?

Adib Khorram: I think like most debut authors, I’m afraid the book won’t do well, that this is it for my career. Fingers crossed I’ll get to write more books.

Also, while Darius is not autobiographical, I did end up putting a lot of myself into the story. It’s a little scary putting so much of my soft, squishy heart out there for everyone to tag in unfavorable reviews.

KM: When interacting with someone who is living with mental illness, we sometimes see the illness and not the person. You did a beautiful job of reminding us that Darius is more than just his depression: he is a teen boy dealing with many teen boy issues. How did you make sure that Darius became more than his disease?

AK: Since I grew up with depression myself, and I never defined myself by it, I tried to remember what it felt like to be growing up with this one part of you that others can see as a big deal, but which you see as a small and uninteresting facet of you.

KM: Iran is as much of a character in this story as Darius or his parents. In this current political climate, how important is it for your readers to know the beauty of the country and Persian culture?

AK: It’s more important than ever for readers to look at the humanity beyond our own borders and see that people everywhere are raising families, buying groceries, playing games, making friends, fighting and loving. When we humanize other people, we remove their other-ness, and when we remove their other-ness, it becomes a lot harder to make choices you know will lead to their suffering.

KM: What would Darius want parents to know about how to communicate with teens?

AK: I think Darius would encourage parents to listen to their kids more than they speak, to be patient, and to remember that teens feel things much more strongly than adults, because when you’re a teenager everything is new, and you don’t always have the right tools to deal with what life’s throwing at you — yet.

KM: How excited are you that Patrick Stewart is reprising his role of Captain Picard?

AK: The limit does not exist.

Seriously. I nearly started crying at a book event when I started talking about Captain Picard and what he means to me, and how thrilled I am that he’s coming back.

Find out more about the author at adibkhorram.com.