Sixteen booksellers attended this year’s IndieCommerce Institute, an interactive, classroom-style workshop for users of the American Booksellers Association’s IndieCommerce platform. The event was held Tuesday, January 22, in conjunction with the 2019 Winter Institute in Albuquerque, New Mexico. 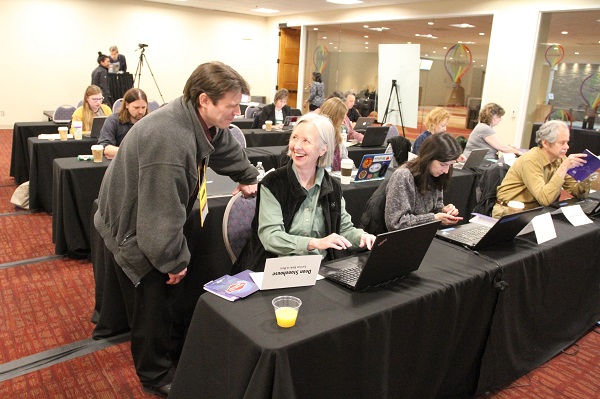 New this year, booksellers could register for a morning seminar, an afternoon seminar, or both. Winter Institute registration was not required to attend the Institute. The morning seminar featured a session on website design and another on content creation and management, while the afternoon seminar also featured two sessions: e-commerce administration and managing online orders.

“Our new model of splitting the IndieCommerce Institute into two half-day seminars, each half focusing on similar topics, worked better this year,” said IndieCommerce Senior Manager Geetha Nathan. “Attendees didn’t have to sit through topics that do not apply to them.”

Another new practice, which the IndieCommerce team launched at last year’s institute, was a series of hands-on exercises using an IndieCommerce sample website. The method was well-received again at this year’s event.

“Attendees were each given access to a sample site that they used for the practical hands-on part,” Nathan said. “They will have access to that sample site for a couple of months so they can practice what they learned at the institute without having to worry about messing up their own website.”

Eileen McGervey, owner of One More Page Books in Arlington, Virginia, said this hands-on aspect of the seminar was very helpful, given that her store’s new IndieCommerce website is set to go live in November.

“The opportunity to learn about new features and the hands-on ‘how to’ was invaluable. Being able to walk through step by step on the test site really helped reinforce what it was were learning,” she said. “There’s so much to IndieCommerce that training programs like the institute can help booksellers get to the next level and more fully utilize the site’s capabilities.”

Another IndieCommerce Institute participant, Jason Jefferies, is currently heading a project to completely reorganize the graphical aspect of the website for Quail Ridge Books in Raleigh, North Carolina, where he has served as marketing manager for the past four months. According to Jefferies, the IndieCommerce team was instrumental in helping him achieve this important (and ongoing) to-do list item.

“Speaking with Geetha and colleagues over e-mail and telephone as I approached this task was very helpful, but meeting them at the IndieCommerce Institute in Albuquerque was an invaluable experience,” said Jefferies. “It not only made the process of creating a digital storefront a more human experience, but it made me feel like I was a part of a larger community of readers and booksellers working toward the same goals and achievements. The information I picked up in the session will continue to carry our store into the future.”

Lesley Rains, manager of Pittsburgh, Pennsylvania’s City of Asylum Bookstore, which recently joined the IndieCommerce program, also told Bookselling This Week that the institute was tremendously helpful for her, and that she plans to attend next year.

“I learned a lot from both the IndieCommerce staff as well as the other attendees, and I’ve already been able to implement some of what I learned, such as adding staff reviews in bulk,” said Rains. “It was a great way to start off Winter Institute.”

At Winter Institute, which took place January 22–25, booksellers could also register to meet one-on-one with members of the IndieCommerce staff to discuss or learn about IndieCommerce or IndieLite, ABA’s other e-commerce platform for indie bookstores.