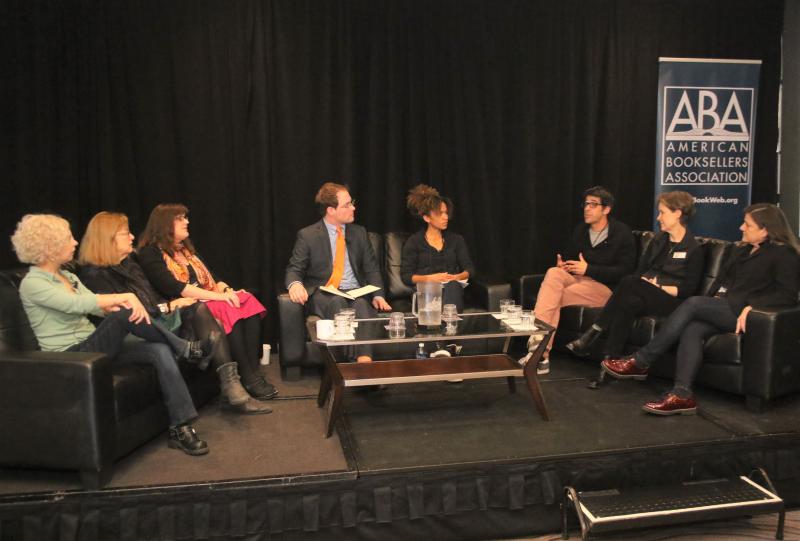 ABA Senior Program Officer Joy Dallanegra-Sanger started the program with a brief history of the Indie Next List, which showcases upcoming great reads based on the recommendations of independent booksellers throughout the U.S. Since launching as the Book Sense 76 list in 1999, “what it’s become is the indie staff picks,” said Dallanegra-Sanger. “This is your list.”

Kicking off the author conversation, Sweeney shared her feelings about having been chosen for the top spot on the April 2016 Indie Next List. “It meant everything to me,” she said, adding that she had been preparing for the reading world to ignore her book. “I came to this late in life. I worried that I waited too long to start, that it was a club I couldn’t enter. To call everyone here my friend — I never will recover from the marvel of that.”

Winters, the author of numerous titles, including the Edgar Award-winning mystery trilogy The Last Policeman (Quirk Books), confessed that his father only recently stopped asking when he was planning to apply to law school. “This week, I had been thinking that I should have been a civil rights lawyer or an immigration lawyer,” said Winters. “I know that what we do is super important and political, but I wish I could do something meaningful right now.”

Jackson told the audience that one of her all-time favorite authors is Flannery O’Connor, who “brings you to these moments of grace that have no sweetness to them,” but the book she has read the most times in her life is To Kill a Mockingbird by Harper Lee. Reading it first as a child, “I thought it was an adventure story about making Boo Radley come out,” said Jackson. “It’s been a different and better book for me every time I’ve re-read it.”

Hoffman’s relationship with independent booksellers has gone beyond influencing her own life and is now present in her characters’ lives, she said. In Faithful, the #1 Indie Next List pick for November 2016, her characters visited Book Revue on Long Island and Strand Book Store in New York City. “It means so much to me to be a reader and to go to independent bookstores that it just makes sense that it’s true for my characters as well,” said Hoffman.

Noting that what her characters read is also important, Hoffman mentioned Fahrenheit 451 by Ray Bradbury, which, she said, “I think is, at this time, maybe one of the most important — if not the most important — book to read about a society in which books are so dangerous that they’re burned. Right now, it’s hard to remember how important it is to write novels, but I remember how important it is to read novels and what it was like for me to go to my independent bookstore when I was younger.”

On how it feels to be an author in this particularly contentious time, Patchett said that while she enjoyed discussing books and bookselling at Winter Institute, the current political climate keeps her awake at night. “I am unhappy,” she said.

Jackson, who was moved by the local protests at the Atlanta airport over President Trump’s executive order on immigration, said, “This is a time when we have to get out of our houses. It’s not enough to let our voices be heard by writing. This is our time to do some peaceful yelling, and I think it’s making a difference.”

Winters agreed, “That’s the beautiful thing we get out of this, is gatherings like this.” One of the reasons people are rallying for such causes, he added, is because we have access to books that put these issues in context — books from Anne Frank and Primo Levi and Art Spiegelman. “We create the context for understanding the world through books; not all books, of course, are about things like that, but all books are part of that conversation,” he said.

The Women’s March in Nashville on January 21 brought Patchett more happiness than she has had in some time, she said, adding, “It was amazing to see now Nashville turned out, and that’s what I keep hearing,” about the camaraderie people discovered in their own cities and towns during the marches. “It’s the feeling of, I am showing up. I am doing something.”

Hoffman felt the same about Boston’s march, she said, and one of her favorite parts was the homemade signs that people carried. “People were writing their feelings in a way that was really emotional and great and funny,” she said. “That’s the only day that I can remember feeling some sort of peace and feeling like I’m with other people. They’re all wearing pink hats; I know who they are. So many people feel the same way.”

Patchett’s favorite sign, she said, read “I refuse to live in The Handmaid’s Tale.” Sweeney’s favorite sign referenced a “gay agenda” that the sign-maker detailed as making breakfast, feeding the dog, marching against homophobia, and calling their mother to thank her for showing them how to stand up for their rights.

Winters’ five-year-old daughter, who got the impression President Trump does not like cats, created a sign for their local march that featured a drawing of an angry cat with text reading, “Meow meow meow meow meow, grr grr grr.”

When thinking about what to do for children in this time, DiCamillo suggested visiting a local classroom to read aloud Katherine Applegate’s Home of the Brave (Square Fish). “When reading a story out loud together, all kinds of stuff happens subterraneanly together,” she said. “Empathy, empathy, empathy.”

Jackson recently gave her daughter a copy of Brave New World by Aldous Huxley. “I hate that we’re reading dystopian novels but that we’re reading them not as ‘look what has happened in the past’ but ‘look where we’re going,’” she said.

Sweeney is a writer because it helps her make sense of the world, just as reading does, she said. “I don’t even believe in writer’s block. I believe that you can psych yourself out by judging everything that’s coming out too harshly. And not giving yourself the space, giving yourself a little rope to write poorly before you write well — that’s almost always how it works. You can expect something of yourself that you only get through hard work and deliberation.”

After the September 11 attacks, Hoffman felt true writer’s block. “I kept thinking, what’s the point? And I had it after the election as well, that feeling of what’s the point,” she said. “For me, the only way to figure out the point is to go back and read the writers I loved, remember their impact on me, and remember how important it is to be writing.”

DiCamillo’s favorite recent interaction with a reader involved a young boy who brought her a particularly battered copy of The Tale of Despereaux, a book that he said made him feel that perhaps he, too, could be brave. “I’ve had so many interactions like that,” said DiCamillo, who added that she was brought to tears by the moment. “A bookstore is a great place to go to be brave, because you can have those conversations and you can put a book in somebody’s hand that helps them. Going back to why we write, I write because it helps me to be brave.”

Patchett said that one the most meaningful books to her was Underground Airlines by Winters. “There can be books that really move you and books you love and books that are beautiful, but that book changed me. It changed the way I saw the world,” she said.

“You don’t need to be a civil rights lawyer, you reached more people and did more good with that book than you would have if you had done what your father wanted you to do,” she told Winters. “My father wanted me to be a dental hygienist.”