Several ABA member bookstores in the Houston, Texas, area experienced fallout from heavy rains that caused massive flooding in the southern part of the state on Monday, April 18. 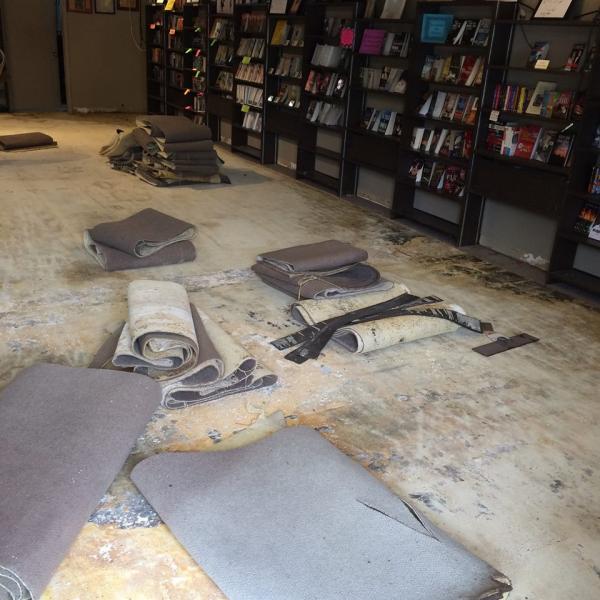 Standing water at Murder by the Book resulted in carpets having to be torn up on Tuesday. Fortunately, no books were lost in the flood.

Officials said at least five residents had been killed, and hundreds more were forced to evacuate their homes, according to CNN. Electricity was knocked out to thousands of homes and businesses in the region, with a peak of 123,000 customers without power.

Some areas received as much as 16 inches of rain by Monday morning, according to the flood control district, while numerous roads throughout the metropolitan area were closed, and city bus and rail service shut down. Emergency management officials said that nearly 200 flights were canceled out of Houston’s Hobby Airport, and flash flood warnings were up in about two dozen southern Texas counties, including Houston’s Harris County.

Valerie Koehler, owner of Houston’s Blue Willow Bookshop said her store was spared but was closed on Monday because some staff members were having travel issues.

“Most of the staff were stuck in their neighborhoods, but no homes flooded. The shop is okay as we are far enough away from any of the bayous and creeks that crisscross the region,” said Koehler.

Blue Willow did have to cancel two visits by author Kate DiCamillo to area schools on Monday, but was able to host a large public event for her the day before. With more rain in the forecast, one author has already canceled an event scheduled for Wednesday, Koehler said.

At Houston’s Murder by the Book, standing water developed throughout the store on Monday, and author Stuart Woods was unable to fly in for his event that night.

Store manager John Kwiatkowski said, “All of the staff are safe. We got some water in the store (again), but we didn’t lose any product. Our landlord has been here already and has a crew coming to rip out all the carpet.”

On Tuesday morning, Jeremy Ellis, general manager of Brazos Bookstore in Houston, said that although their store is a bit soggy (since the roof leaks a bit whenever it sprinkles), “all is well enough.”

“We had to close on Monday due to high water in and around our neighborhood,” he said. “The flood waters have receded for the most part now, although they’re predicting another round of showers.”

Also on Monday, Katy Budget Books, a Houston new and used book store, took to Facebook to post this humorous phone exchange with a customer, which received over 400 likes:

Richard: Yes, ma’am... More rain in the forecast and we don’t want anyone stuck at the store in all this bad weather....

Customer: (Long pause) You mean there is a chance I could get stuck in a bookstore all night... (giggling )

Customer: Don’t you dare close that bookstore until I get there....I’m on my way!!!

According to the National Weather Service, additional rain and thunderstorms, though not as severe as Monday's event, were forecast for the area through Wednesday.