ABA acknowledges Indigenous Peoples' Day, taking place Monday, October 11, and celebrates our Indigenous booksellers and stores. Libro.fm has a (partial) list of great Indigenous bookstores around the country. And below are resources for those who want to learn more about the history of Indigenous Peoples and the history of this day that honors them. ABA continues our ongoing honoring of the Indigenous peoples, past and present, whose land our events take place on by posting our Land Acknowledgement and making a donation to the American Indian College Fund for both Winter Institute and Children’s Institute. 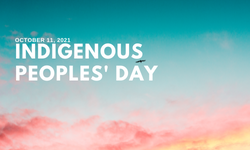 First recognized in the early 1990s by Berkeley, California, Indigenous Peoples’ Day honors the history and cultures of Indigenous Peoples. Currently, 14 states and over 130 cities across the U.S. observe the holiday in place of Columbus Day.

Indigenous Peoples’ Day serves to disrupt and reframe the narrative surrounding Christopher Columbus’ 1492 arrival in the Americas, which resulted in the devastating loss of life, tradition, and land for Indigenous Peoples.

Today, the National Museum of the American Indian writes, “Native people continue to fight to maintain the integrity and viability of Indigenous societies. American Indian history is one of cultural persistence, creative adaptation, renewal, and resilience.”

Shifting the narrative away from celebrating Columbus to focus on the knowledge, traditions, and lands of Indigenous Peoples offers us an opportunity to “learn about the Peoples whose land we are on and to take action in supporting the rights and sovereignty of all Indigenous Peoples” (CulturalSurvival.org).

As we come together for events, ABA acknowledges that those of us here in the United States reside on traditional lands of Indigenous people past and present. In gratitude, ahead of each event, ABA makes a donation to the American Indian College Fund to honor the Indigenous people who have been living and working on the land from time immemorial and to express our appreciation.

Looking for a more in-depth history of Indigenous Peoples Day? Here are some additional resources:

Booksellers can take a look at these reading lists:

ABA's Emily Behnke and Courtney Wallace contributed to this article.