Face Out: ABA Board Member Kelly Estep on Her Life Among Books

In this installment of our series profiling American Booksellers Association Board members, Bookselling This Week talks to Kelly Estep, soon-to-be co-owner of Carmichael’s Bookstore and Carmichael’s Kids in Louisville, Kentucky. In May, Estep was elected to her first three-year term (2018–2021) on the ABA Board.

Bookselling This Week: Please talk about your early experiences with reading and books. 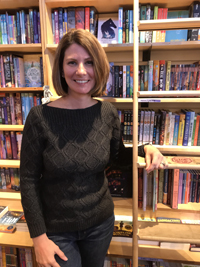 Kelly Estep: I can’t remember a time that I wasn’t running around a bookstore. My mom worked in a bookstore when I was really little and my aunt and uncle opened Carmichael’s in 1978, where my mom went to work in 1983. I was so lucky to have access to any book I wanted growing up, but we also spent a lot of time at the library—so many hours. My parents were pretty strict about TV, but I could read any book I wanted, and so many of my summer days were spent hiding behind the shed in the backyard trying to finish a book a day. Being surrounded by books is my safe space!

BTW: Did you hold other positions in the book industry before becoming a bookseller?

KE: Nope—I started dusting shelves when I was about 13 and although I had some other jobs over the years, I never left the bookstore.

BTW: How did you begin as a bookseller, and how long after starting in bookselling did you begin to feel that you had found a special vocation?

KE: Since I grew up in the store and it was a huge part of our family life, I think the hard part for me was deciding that it was OK to do this as a vocation. I felt some pressure to do other things—that this wasn’t a “real” job—and it took a while for me to realize that working in the bookstore made me really happy and that was the only thing I needed to know.

BTW: What do you think was the most important factor that led to your establishing/buying your store?

KE: Carol and Michael (my aunt and uncle) have always been so supportive of me taking on leadership roles at the store, trying my ideas out, and just generally allowing me to feel that their store was “my” store, too. This year, I am taking over ownership of the store with their daughter, Miranda. We will be partners, and the transition has been purposefully slow so that we have been able to move into all of the ownership roles.

BTW: When did you first become a member of ABA? What motivated you to join?

KE: Carmichael’s has been an ABA member as long as I can remember. It was always important for us to be part of the larger community of bookstores and learn from our colleagues. This became even more crucial as the number of stores shrank in the 1990s and so many struggled just to stay open. It became obvious to us that bookseller education was a crucial part of maintaining a healthy store.

BTW: What do you think are some of the most important changes in bookselling since your store opened?

KE: Wow! Carmichael’s is 40 years old, so I feel like we have seen a lot of changes. So many things in the last 10 years, though, have made a huge difference for the store. Direct ordering with efficiency has certainly changed the way we are able to maintain inventory (I remember telling customers four to six weeks to get a book in if we had to order direct from a publisher). Because of the Internet, people are less likely to come into the store not knowing about new books. The “discovery” that happens now is much more about introducing customers to books and authors they may have not heard of, and this is a trust that we have to work hard to build. Customers can follow authors on social media and get suggestions from so many other sources that we have to do something more to distinguish ourselves as booksellers. We have also seen an incredible groundswell of support with the Buy Local movement. So many people realize that one important reason to shop at our store is because they want to live in a neighborhood with a bookstore and if they don’t shop and support us, we can’t survive.

BTW: What are your key goals as an ABA Board member for fostering the book industry, and bookselling in particular?

KE: I look forward to continuing the ABA’s work of creating and fostering an environment that will allow bookstores to remain a relevant and vibrant part of the national arts community. We have to continue to place ourselves in the public arena to remind publishers, authors, and the public in general that while indie stores may be a smaller piece of total sales of a book, our influence is so much bigger than that. Figuring out a way for young people to buy existing stores and open stores in areas that have been lacking a bookstore for many years is also incredibly important. I would really love to never have to have the conversation again with an author or publisher about why linking to IndieBound or an indie store in their area is an absolutely crucial thing for them to do. I also want to help booksellers feel comfortable with embracing technology to make their stores more profitable and efficient.

BTW: What are you reading now?

KE: The new Carlos Ruiz Zafon, The Labyrinth of the Spirits. It’s an incredible addition to his Barcelona cycle featuring the Cemetery of Forgotten Books. I’m also reading Sohaila Abdulali’s What We Talk About When We Talk About Rape. Realizing how far we’ve come and how far we have to go with this national conversation is overwhelming; this book helped me feel like there are so many pieces that are common around the globe and that having these tough conversations is necessary.

BTW: You get a day to walk through any city, town, or landscape with any one writer. What writer and what place?

KE: My first instinct is to say Gabriel García Márquez because he is my favorite, but I’ll change that up a little and say S.E. Hinton. The Outsiders was a seminal work for me. To walk and talk with her about how she wrote that book and what it meant to her at such a young age would be amazing. My 13-year-old son and 11-year-old daughter have both read it in the last few years, and I was amazed at the lasting impression it still makes more than 50 years after publication. The world moves so fast now, but teenagers still have all of the feelings of loneliness, deep friendship, judgment, sadness, and love that are all so intense at that age.

Oh, but wait…Harper Lee’s South, or Isak Dinesen’s or Alexandra Fuller’s Africa! Ugh, this is too hard.