On Saturday, February 20, at the American Booksellers Association’s 2021 Winter Institute, Dr. Brené Brown joined Janet Geddis, owner of Avid Bookshop in Athens, Georgia, for a conversation about moving forward from a place of vulnerability, resilience, and courage.

Booksellers can watch a recording of the session, which will be available through March 22, on the Education Resources page on BookWeb.org. 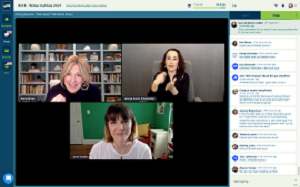 Brown began by sharing that while working with Fortune 500 companies in the last nine months, she hasn’t been on a work call where at least half the employees on screen — including those in the C-suite — were not in tears. The most important thing to do right now, she said, is to normalize that everyone is struggling.

“Right now, the most important thing we have is each other. Our human beings, our people,” Brown said. “It is very necessary right now as a leader to make sure that people are seen.”

Geddis noted that throughout the pandemic, she’s made sure to have a regular mental health check-in with her staff via Zoom. “What I found is it really allows us to give context to potential frustrations we have with each other at work,” she said. “The quality of work we’re accustomed to just maybe isn’t there, and there’s always a reason for it.”

One of the biggest failures in the absence of courageous leadership, Brown said, is that people aren’t having enough hard conversations. “We’re afraid to have these conversations because we tell ourselves we don’t want to hurt someone else’s feelings, we don’t want to be unkind...but what we really don’t want to do is be uncomfortable,” she said. “What I’ve learned very quickly is clear is kind, unclear is unkind, and everybody needs trust.”

When staff don’t understand what’s happening or the reasoning behind decisions, they can begin to make up stories and narratives, which may sow distrust. A way to mitigate that is through open, honest, and uncomfortable conversations, she said.

“I’m a fast thinker, but I’m a shitty fast thinker,” she added. “I can get scary when I get scared. I have never once in my career, nor have I spoken to anyone, who’s ever regretted taking more time in a hard conversation.”

Geddis shared that after working on her business on her own, she found herself frustrated once she started working with other people. “For a lot of people who own bookstores, this is their dream,” she said. “It’s so scary to not only let people into it, but open your mind enough to start accepting their ideas, accepting some feedback that might be tough to hear about how you’re a manager or how you’re running things.”

But when leaders share more details about their plans with their team, it invites them into the vision-making process. “It changes the engagement and investment level of folks, and it makes us better,” Brown said, noting that she’ll also review something called the “five Cs” with staff — color, context, connective tissue, cost, and consequence — for every project.

“I can [use the five Cs] to pull some of the ideas I have out, and I can lay them out and explain them,” she said. “Not only do people understand why they’re doing it...but they can do it better.”

With that process, Brown also finds that her team can help her refine her plans.

“What you as a leader bring into the room is what’s okay in the room,” she said. For example, following George Floyd’s murder, she opened meetings by acknowledging what happened.

“If I don’t invite things like that into the room, then what I’m saying is we’re not allowed to talk about these things. The psychological safety that you have to build is really important, but it also starts with how comfortable you are as a leader inviting hard things into the room,” Brown said.

In conversations about diversity and inclusion, leadership should also always prioritize listening. “I’m not here to defend a position,” Brown said, “I’m here to learn more about the position I should be taking. I’m not here to be right, I’m here to get it right.”

Moving forward, Geddis said that one of the challenges independent bookstores most often face is communicating that the role they play is more meaningful than Amazon’s.

It’s like asking a fish to describe water, Brown said. “People are disconnected and lonely. We have the data and we know that. I think sometimes people feel lonely and disconnected and like their lives are out of control. So, they control their lives by getting things in 24 hours, even though we don’t need them for three months. And I think we forget about community.”

Brown noted she has a renewed sense of hopefulness about coming out of 2020 — this year, there will be new opportunities to stress how indie bookstores are vital to communities.

“BookPeople, Brazos, Blue Willow, Murder by the Book — these are my neighbors and friends,” she said. “[They] give me something that a lot of the world needs and doesn’t have right now. We need to figure that out.”