Ci7 Keynote: Elizabeth Acevedo on What Being Well-Read Really Means

Elizabeth Acevedo, the New York Times bestselling author of The Poet X and With the Fire on High (both HarperTeen), spoke about the true meaning of being well-read at the seventh annual Children’s Institute in Pittsburgh, Pennsylvania. 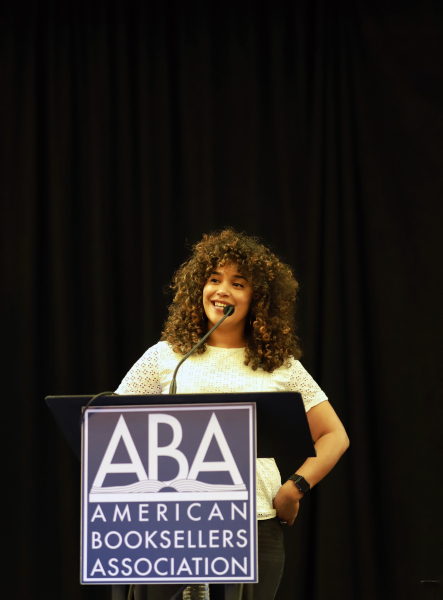 Sara Grochowski of Mclean & Eakin in Petoskey, Michigan, introduced Acevedo’s afternoon keynote on Friday, June 28, saying that her work “has won the hearts and minds of young readers. Acevedo writes books that serve as both windows and mirrors, that are full of love and truth, and shine a light on experiences and emotions that are both intensely specific and undeniably universal.”

With the Fire on High, which came out in May, received starred reviews in Booklist, Publishers Weekly, Kirkus, and School Library Journal, and The Poet X won the 2018 National Book Award for Young People’s Literature, the Michael L. Printz Award, the Pura Belpré Award, and the Boston Globe-Horn Book Award. Both The Poet X and With the Fire on High are, said Grochowski, “simply put, essential reading.”

Acevedo is a National Poetry Slam champion, so in her keynote talk, she encouraged booksellers in the audience to return the same performative energy she was bringing to them: “I am first and foremost a poet and a poet who performs, so I’m used to the audience interaction, so any experience I’m a part of is usually an interactive experience.”

Inspired by the words of Well-Read Black Girl founder Glory Edim, whose workshop just preceded her keynote, Acevedo said, “I’m really just going to tell you all a couple of stories that I think will highlight what I am considering when I come forth to tell you that we have to redefine the idea of ‘well-read,’” and also give a few examples of the ways she has had to think about that phrase in her own life.

Before writing The Poet X, published by HarperCollins in 2018, Acevedo told booksellers she had actually written two previous young adult novels as an eighth grade reading teacher in Prince George’s County, Maryland, working at a school where the student body was 78 percent Latinx and nearly 20 percent black but had never had a Latina teacher teaching a core subject — or an Afro-Latina teacher, like her, period.

Acevedo said she became a voracious reader as a child because her parents, both immigrants from the Dominican Republic, took her to the library often, and she wanted to instill that same love in the kids she taught, most of whom were reading at a sixth-grade reading level. One of her students at the time, Katherine, was a particularly reluctant reader, and although Acevedo brought her every popular kids’ book series to try, Katherine eschewed every one of them, from the Twilight series to The Hunger Games to Divergent. “These books just ain’t about us,” she told Acevedo at the time.

But, when Acevedo brought Katherine a selection of Sandra Cisneros, Julia Alvarez, Nicki Grimes, and Jacqueline Woodson titles, she read them all and was asking, “What’s next?” Acevedo was overjoyed she was able to get this young girl to see that “at least this person cared enough to bring me a book specifically for me that they thought I would enjoy. That connection means almost as such as the book,” said Acevedo. “‘I saw this and I thought of you’ — it’s an invitation.”

This experience caused Acevedo to realize that to truly engender that love of reading in young people, she should try to write her own work, so she applied to graduate school to get her master’s degree in poetry. Today, Acevedo holds an MFA in creative writing from the University of Maryland, but at the time, she felt intimidated by the situation she found herself in, for many of the same reasons some find The Poet X, which is written in verse, intimidating.

“Sometimes when people read The Poet X, they are afraid because they think that what verse asks is, What do I mean?” Acevedo told booksellers. “When you open a poem, that is the first question: What does it mean? As opposed to, what does it make you feel? What is the point of entry? What is a word that resonated? Is there an image that makes you want to explore deeper?”

“What does it mean?” said Acevedo. “That is not what a poem does. That is not the main question of a poem.”

One of her professors, an older white man who was former poet laureate of the state and whose work is in what many consider to be the traditional poetic canon, asked everyone in her class to write an animal ode. Acevedo chose the rat, since it was an animal she knew growing up in the Bronx, but she was told that “rats aren’t noble,” unlike a deer or a blackbird. But Acevedo proceeded to write her poem about rats, which she performed on stage for booksellers, to prove that the symbols and trademarks of her childhood, and the multiplicity of her experiences, are, in fact, for the canon, no matter what traditional gatekeepers think, whether they are booksellers, professors, writers, or critics.

It is important to read outside of the things you are taught are worthy of being canonized, she told booksellers; what she learned during grad school was that to be well-read doesn’t mean trying to create parameters around what you read or write, to make assumptions about what you should write, or to create hierarchies around certain types of writing or genres, such as her beloved romance novels.

“It’s a fascinating thing to negotiate because otherwise, how are these conversations happening?” she added. “As someone who read a lot outside my experience mostly because there weren’t a lot of books about Afro Latinas, I had to learn what it meant to not know, what it meant to be uncomfortable.”

Acevedo also told booksellers about her sixth and eighth grade writing teacher, the author Phil Bildner, who played the same role she had hoped to play in Katherine’s life, bringing her books where she could see herself reflected. He also encouraged her to keep writing poetry, and to write letters to authors whose books he gave her to read. One of these was Heaven by Angela Johnson; Acevedo wrote to her asking to for more information about a character, and three years later, Johnson published The First Part Last, dedicating it to Acevedo and to her class at school. This was a life-changing moment for Acevedo, and why she dedicated The Poet X to Katherine, her former student in Maryland.

“This was such a gift. I had never seen my name is print and I realized I liked it. But I also realized that an idea I had thought of was good enough to make a book, and all of that happened because of one person who would put everything in front of me, who saw me for who I was and knew this is a kid just looking for a story and if I can keep finding the stories that keep her interested, that keep her imagining, that help push her to think about who she wants to be and what she can do, she is going to do something. He saw that, that every time you look at someone and you say, have I got the book for you, what that does to a person who does not feel seen…that is pivotal.”

Acevedo then issued a directive to booksellers: “When we consider the meaning of well-read, when people come into our spaces,” she said, booksellers need to think about “how are you challenging yourself to read outside of the comfort of the genre you really like?”

Because, she said, that is what it means to read diversely: “It doesn’t just mean finding a book with characters of color that someone told you was a good book but that you haven’t read — it means that you have the responsibility to be able to meet these needs or at least be able to point out the section.”

In conclusion, Acevedo told booksellers she wants them to keep considering what it means to reinvent canons, which is something they do every day for every person who walks into their store and has a book put in front of them.

“Thank you for doing that hard work,” she said. “Thank you for being at the forefront of the conversation, and thank you for being flexible with what is going to be asked of you, because we are still figuring out what it means to dismantle the kind of messages that we have been told about certain groups of people.”