In her keynote speech at the sixth ABC Children’s Institute, held last week in New Orleans, Angie Thomas, author of the debut YA novel The Hate U Give (Balzer + Bray), spoke to booksellers about using their role as gatekeepers to change children’s lives through books. 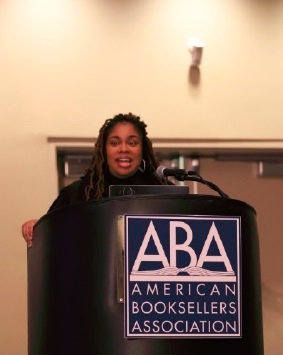 Author Angie Thomas told booksellers they can change the world in her keynote at Children's Institute.

The Hate U Give, which debuted in February 2017 at number one on the New York Times Young Adult Bestseller List, tells the story of a 16-year-old girl named Starr who sees her friend Khalil killed by a police officer at a traffic stop. As the sole witness, she must decide whether to speak out about that night as Khalil’s death becomes a national headline.

Thomas’ debut novel was longlisted for the National Book Award and named a Printz Honor and a Coretta Scott King Honor book. The trailer for the movie version, premiering October 19, debuted on Sunday. Her next book, On the Come Up, about a young female rapper named Bri living in Starr’s community of Garden Heights, comes out next February from Balzer + Bray.

On Thursday, June 21, in a finale keynote capping off the institute, Thomas told booksellers she was there that day to beg them to change our world. “As a children’s bookseller, you especially have the power to do that. It may sound like an overstatement, but one of the reasons I am standing here today is due, in part, not only to books but to the gatekeepers who provided me with them,” she said.

Thomas explained how important educators were in her own personal journey toward becoming an author. As a first-grader growing up in Jackson, Mississippi, Thomas overheard her teacher, whom she referred to in her speech as “Mrs. First,” complain to a coworker that educating black students was pointless since they would all end up on the street anyway. 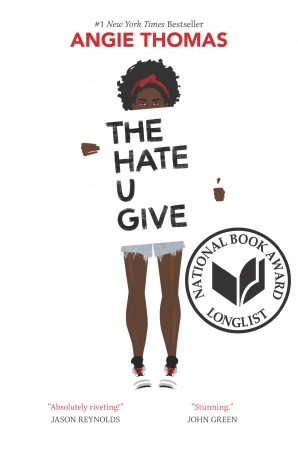 Hearing this judgment was a devastating blow for Thomas, but luckily, her third-grade teacher (“Mrs. Third”) was the opposite of Mrs. First. She nurtured Thomas’ love of writing after finding her writing a Mickey Mouse fan fiction story in class.

Another time, when a classmate asked Mrs. Third if he could possibly become successful someday, her teacher did not succumb to the trap many white people fall into: pretending to be colorblind. She told her students, “Yes, you’re black; yes, some things may end up being harder for you because of your circumstances. But that doesn’t mean you can’t become whoever you want to be.”

There is nothing wrong with recognizing race and the fact that it may create certain hurdles for certain children, Thomas said. When today’s kids of color step into the world, they are going to face bias and systemic racism, but booksellers can provide them with the books that will prepare them to become everything they have the potential to be, despite these hurdles.

“Seeing color is not the problem,” she said. “It’s what you do once you see color when the problems come… You never know how that little kid you’re selling books to will turn out and how that one act can affect their life. These kids are full of potential and possibilities: they could cure cancer, they could cure AIDS, they could become president.”

Each of these two teachers planted different seeds and shaped the course of Thomas’ life in different ways, even though both were white and both saw her blackness. For booksellers, she said, offering the children they serve the right diverse books can affect their life path in a positive way, by providing them with the mirrors, windows, and sliding glass doors that diverse literature creates. These books can prove to children that the world is so much bigger than what they can see out their front door, she said. 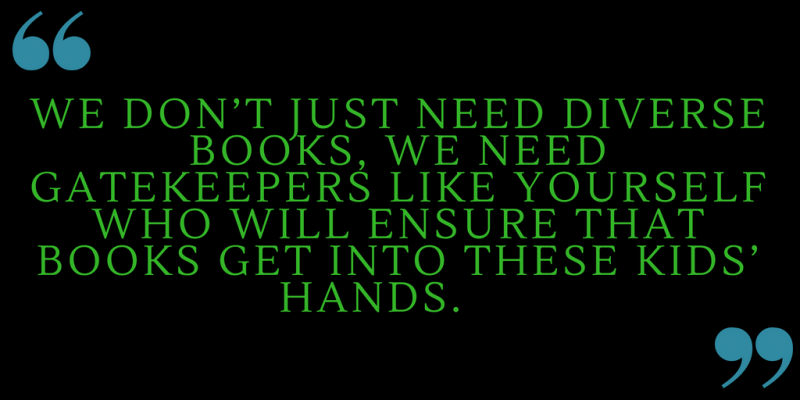 Nowadays, Thomas told booksellers, being a gatekeeper is more important than ever — and a responsibility children’s booksellers cannot shy away from. They need to be a Mrs. Third in their own right, she said.

“[Making a change for these children] takes hard discussions. It takes reflection, it takes engagement, it takes books: wonderful, diverse books that reveal the true makeup of our world. Books create empathy, and empathy is far more powerful than sympathy,” said Thomas. “Recognize that as a bookseller, some of the children you serve will have hurdles. Some long to see themselves in a book, some long to know there’s more in the world than what is around them, some need to see into a window into someone else’s life and ultimately step through a sliding glass door. We don’t just need diverse books, we need gatekeepers like yourself who will ensure that books get into these kids’ hands. You can empower them.”

If nothing else, Thomas added, she hoped booksellers would remember one thing from her talk: “That child that you sell a book to today could one day be a politician with a Twitter account.”