Booksellers from cities across the U.S. served on a panel at the American Booksellers Association’s sixth ABC Children’s Institute in New Orleans to discuss the different ways independent bookstores can make a greater effort to engage with and provide resources for their local underserved communities. 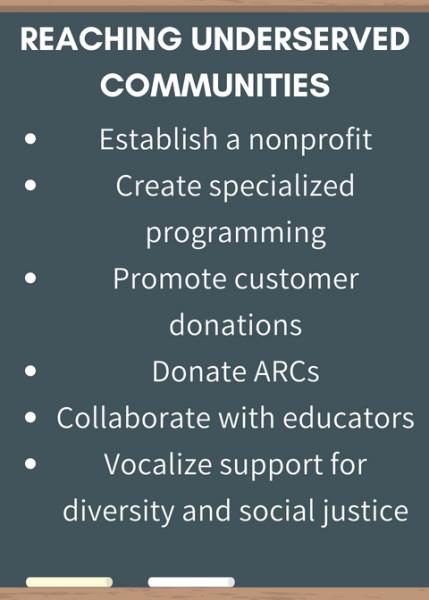 All three booksellers said they use their relationships with customers to help engage with local underserved communities. Strong customer-store relationships can not only help to build a community around literacy and books, but they can also provide a backbone for funding and support when it comes to seeking donations and planning events.

McDonald shared the story of how 57th Street Books, the sister store of the Seminary Co-op Bookstore, worked with Jenny LeFlore, also known as blogger Mama Fresh, to promote a community for mothers on the southside of Chicago.

“When [LeFlore] came to us, she was a mom ready to organize events for other moms and dads who also needed spaces to bring their young children...spaces where they would feel encouraged to do that, not where they’d feel in the way,” McDonald said. “She found that on the southside of Chicago, those spaces were few.”

LeFlore asked 57th Street Books if she could use their space to host a story time for children.

“We now do a monthly story time with Mama Fresh. It’s called a Monthly Pajama Storytime,” said McDonald. “It’s a relaxed environment for everybody…[LeFlore] really understands the community that we’re in and she’s helping us to better understand the communities that we serve.”

Customers of independent bookstores, such as Mama Fresh, repeatedly prove to be excellent resources for networking and partnership opportunities, according to the panelists.

“We find that a lot of community partnerships that we engage in don’t really come from us having to do a whole lot of outreach...they come from having these conversations in the store,” said Holt, who helps organize Left Bank Book’s Angel Tree Book Drive, which is partially supported by customers who are willing to make a donation at the register.

These donations, along with support from Teach for America, have provided books to many St. Louis classrooms in need. At Central Visual and Performing Arts High School, a public school in St. Louis, Angel Tree donations supplied students with more than simply books; they received a library, which was a resource that they did not have access to prior.

“I received an e-mail at the very beginning of the school year from an English teacher named Maggie Schuh, and she let me know that their school did not have a library. [She used] her planning periods and her personal connections by reaching out to get books donated,” said Holt, who, after receiving this message, began thinking of ways the Left Bank Books Foundation could help. “When it came time to plan our Angel Tree I asked her if it was something she would be interested in doing.”

From there, a table was set up near the register at Left Bank Books, where customers could pick out a book to donate.

Customer collaboration at the register has proved to be very effective in garnering resources for underserved communities; Lopez shared the ways in which Children’s Book World supports local hospitals and clinics through customer donations.

“At the register, we have a little basket of books that [hospitals and clinics] would like to have, and when customers come up we ask them if they’d like to buy a book,” Lopez said. “Nine times out of ten, they are happy to add on one extra book.”

Donations are not the only way to help communities in need. At Children’s Book World, establishing an in-store nonprofit with programming targeted toward chronically underserved schools and communities has provided children with resources to promote literacy.

“We won a James Patterson grant and we set up a nonprofit. We were able to establish two programs: a children’s book recycling center and a program called Readers and Writers Rock,” said Lopez. “We have a garage space in the back of store. We created a library of gently used books.” Those who apply to the program can visit the garage every six months to a year to select one to two boxes of books.

Finding ways to actually provide books for underserved communities is crucial, as many families do not have the means to buy books themselves, noted Holt.

“There is research that suggests personal libraries can increase the amount of schooling a child has by two to three years, if they have age-appropriate books in their homes,” said Holt, though building a personal library is a privilege that many families in the U.S. are unable to afford. “The percentage of people living below the poverty line is shockingly high.”

The River City Readers Program aims to not only supply students with a personal library, but to also expose them to author visits.

“Our store is located in the city of St. Louis, and almost never could we bring an author to the school that is just two blocks away from us,” Holt said as she discussed the ways in which sales dictate where an author is able to visit. “If we can get books bought for those students, then we don’t need to send home order forms with them. They just get to go home with a book.”

Left Bank Books customers have the opportunity to sponsor the River City Readers Program for a yearly donation of $100, which buys one student five books per year. The program also works to coordinate an author visit to a local underserved school at least once per year.

In addition to the benefits that these programs offer students — children are able to participate in community-based literary events, build a personal library, and develop their own literacy skills — children also have fun.

“We have a program called Reading Gives You Superpowers, which is also part of our non-profit,” said Lopez. “We’re able to bring [children] into the store to actually buy a book under the price of $20 for themselves. It’s so exciting to see them walk through the store and go through every little shelf, trying to find the book that they want.”

Lopez also acknowledged the hardships that students in underserved communities may face: “Family court sees thousands and thousands of children go through their system every single day. Kids are sitting there in a stressful situation...they need books.”

It isn’t only books that children in underserved communities lack access to; other resources, such as computers and updated technology, are also limited, noted McDonald, who worked with the Chicago Laboratory Schools, one of the most affluent independent schools in the country, to bring Jean Yang, an esteemed contributor to the field of STEM, to neighborhoods around Hyde Park and also bring students to equipped facilities they did not have access to in their own schools.

“The Englewood Community is a community that has 46 percent of children and families living in poverty, but they also have 96 percent of students using the Chicago Public Library,” said McDonald. “We worked with Lab to put together a proposal to bring Jean Yang to these off-site venues...where students were actively learning about STEM curriculum but didn’t always have the actual computers or technology to get into computer programming.”

Supporting diversity and social justice, as well as having a staff representative of this, is also an important part of reaching underserved communities, Lopez noted.

“We are not afraid of letting people know who we are at the store,” Lopez said. “We have a trans man who is working for us now, and he came to us because he saw immediately from our posts, our window [displays], and our shelves that we were about social justice. And it meant more to him than anything else.”