Ci6 Education: How to Market and Sell STEM/STEAM Books 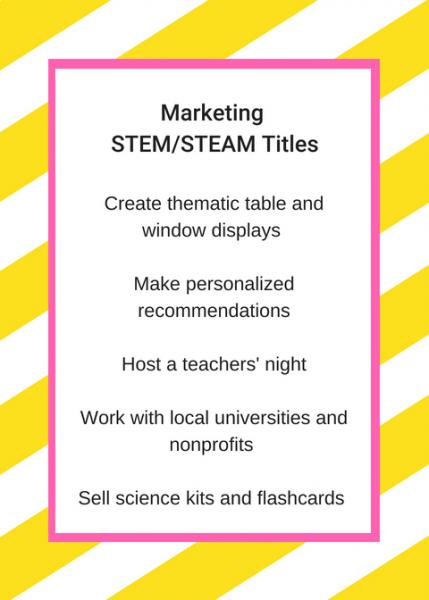 Four book industry professionals served on a panel at the American Booksellers Association’s sixth ABC Children’s Institute to discuss the most effective marketing strategies for STEM/STEAM books and non-book merchandise.

The June 21 panel — titled “How to Market and Sell STEM/STEAM Books” — was moderated by Kelsy April of Savoy Bookshop in Westerly, Rhode Island. The panelists were Chris Ferrie, author of the Baby University series from Sourcebooks Jabberwocky; Amy Kesler of Ada’s Technical Books in Seattle, Washington; Heidi Weiland, director of trade sales at Sourcebooks; and Patricia Worth of River Reader Books in Lexington, Missouri.

April defined the STEM category as books that feature themes of science, technology, engineering, or mathematics. April also noted that recently, the Rhode Island School of Design championed a movement that promotes using the term STEAM, which extends the definition of STEM to include art and design.

The panelists discussed how the creation of a blanket category for science-oriented titles fosters a sense of familiarity for consumers, which, in turn, makes these books more marketable.

“[Parents] come in and they know that their child is supposed to be into this thing called STEM,” said Kesler, who added that many families find the term to be comforting. “They don’t necessarily know what it is or what it means, but just the fact that there’s a thing they can ask for has been very helpful.”

For customers who might not know to ask for STEM/STEAM titles, the panelists recommended curating interesting window and table displays as well as facing out certain titles. The displays at Ada’s Technical Books are often centered on a broad theme, such as Valentine’s Day, Father’s Day, and rainy/sunny days. Kesler recommended mostly non-science themes because it pushes back against the instinct to display books on the same topic together. She added that over half of the store’s children’s section features books that are facing out, which makes the experience of choosing a book less overwhelming for customers.

Hand-selling also plays an important role in marketing STEM/STEAM titles. At River Reader Books, Worth set up a display table near the register that features books aimed at a wide range of readers, which she said helps her to easily make recommendations.

Some of the most frequent consumers of STEM/STEAM titles are families with young children and educators, the panelists noted.

“We get really educated children who come in and say, ‘I already know the basics about the dinosaurs. Give me more,’” said Kesler, adding that families with parents in STEM-oriented fields are some of the most frequent customers at Ada’s Technical Books.

At River Reader Books, Worth sees many educators. “We are the only bookstore for a 50- to 70-mile radius in rural Missouri, so I get all the educators,” she said, noting that the store hosts special nights for the teachers in the area to introduce them to different titles. “One of the things that our teachers particularly like is the fact that STEM/STEAM brings reluctant readers back to a book.”

“As a child, I wasn’t interested,” said Ferrie, who admitted to being a very reluctant reader before penning his Baby University series, which includes Quantum Physics for Babies, The ABCs of Science, and others.

The idea for the Baby University books stemmed from his inability to find science-oriented board books for his own children. “There was nothing about what I was passionate about as a scientist,” said Ferrie. “I thought...if it doesn’t exist, I’ll just do it [myself].”

While Ferrie’s books are marketed toward young children, Weiland emphasized their appeal across generations. Parents often decide to buy the books for their adult children who have STEM-related careers.

The popularity of Ferrie’s books has sparked a new trend in the industry. Weiland noted that the Baby University books have set a strong foundation for Sourcebooks to expand upon and that booksellers should be on the lookout for new titles to come.

As the market for STEM/STEAM books expands, the panelists expressed hope for more diversity within the category. Kesler said that while there are countless picture book biographies that focus on figures from more privileged backgrounds, she would like to see more content focused on women of color as well as people of different abilities and socioeconomic backgrounds.

“There are not very many people of different abilities mentioned...there’s not a lot of economic diversity. It’s a lot easier to go into math and science when you come from a privileged background,” she said. “I’m constantly on the lookout for diversity in every shape, size, and color to make sure my store is a beautiful rainbow of a place.”

In an effort to reach out across populations and attract those interested in learning about science to different in-store events, booksellers should consider partnering with different STEM-oriented nonprofit organizations. Ada’s Technical Books works with the University of Washington to bring PhD candidates to the store to explain their research to the general public, and River Reader Books works with the University of Missouri Extension to host cooking classes for its customers.

In addition to stocking a diverse range of different STEM/STEAM titles, the panelists suggested that booksellers also consider non-book merchandise that fits the price range of their customers, such as science kits and flashcards, to encourage a more hands-on approach to engaging with scientific content.

Booksellers interested in expanding their STEM/STEAM sections can look to the American Library Association’s Robert F. Sibert Medal, which is awarded annually to the most distinguished informational book in English published in the preceding year. Another resource is the National Science Teachers Association’s annual list of Outstanding Science Trade Books as well as the organization’s Best STEM Books list.