Independent booksellers across the country have chosen Once There Were Wolves by Charlotte McConaghy (Flatiron) as their top pick for the August 2021 Indie Next List.

“Telling of the reintroduction of wolves to the Scottish highlands,” said Ben Platt of Jackson Hole Book Trader in Jackson, Wyoming, “Once There Were Wolves affirms the importance of our connections to the human and more-than-human worlds that sustain us, worlds we sever at our own peril.” 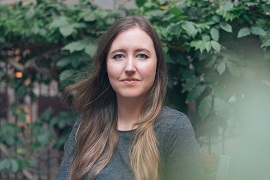 McConaghy is also the author of August 2020 Indie Next List Top Pick Migrations. Here, she talks with Bookselling This Week about rewilding Scotland, climate change, and visiting indie bookstores.

Bookselling This Week: Can you talk about the concept of rewilding? Why center Once There Were Wolves around it?

Charlotte McConaghy: Rewilding is about returning a space to how it was before humans impacted it, and it’s a crucial step in slowing the rate of climate change on our planet. Simply put, we need wild places to thrive, we need biodiversity, we need trees. We can plant trees ourselves, and we must, but we can also allow animals to play the roles they’re meant to play in a balanced, healthy ecosystem. The wonderful thing about wolves and other apex predators is that they have an extraordinary effect on their environments. By hunting the overpopulated herbivores they give plants and trees a chance to grow, and encourage all kinds of other animals and insects to return to an ecosystem. Wolves can literally grow forests. When I learned this I knew I had to write a book about it. And not just about rewilding a dying landscape, but about rewilding ourselves, which to me means returning ourselves to our most compassionate selves, finding tenderness and kindness, and ultimately a sense of harmony with the wild places and creatures around us.

BTW: In the book, Inti has two roles — to reintroduce wolves to the Scottish Highlands and to reintroduce a sense of security to her and her sister’s lives following a horrific trauma. Where did the idea for her character come from?

CM: I think this book, and Inti, came from a deeply frustrated place within me. I was learning about the mass slaughter of wolves and how that cruelty has caused a knock-on effect for the environment, and I was also overwhelmed with the domestic violence catastrophe we are enduring, and so I started to think about how these issues might inform a character. Inti became someone whose innate empathy and compassion had been twisted by the harm she witnessed people committing upon the environment, the creatures we share the planet with, and each other. She is surviving trauma, and she is furious. I got a real thrill out of writing a woman who was ultimately driven by rage, and I also found a sense of catharsis in helping her to navigate her way towards healing.

BTW: And what about Aggie? 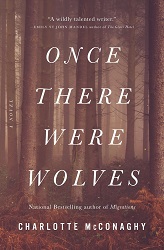 CM: I think there’s a common narrative of the trauma survivor who becomes tough and detached, a warrior of sorts. And in a way this is what Inti became. But we also need to make space for stories of trauma survivors who don’t become tougher, but more sensitive, more fragile. This is Aggie. Like her sister, she has been changed by the secrets of their shared past, but her response is more difficult, perhaps, for us to face. It’s a more confronting thing to witness, a complete closing off from the world.

BTW: One thing that struck me while reading is that conservation is wrapped up in very human issues — one’s capacity for violence or destruction, personal responsibility, how one protects or doesn’t protect their environment, their loved ones. What drew you to exploring this?

CM: As I mentioned, writing this book was about trying to understand why we do so much harm to our planet and to each other. I think the two are actually tied very closely together. What it boiled down to, for me, was empathy. This plays such an integral part in how we will move forward, it informs every layer of our behaviour, how we view our personal responsibility, how we treat each other and the animals in the wild. It’s harder to practice empathy for creatures we can’t see or hear, those we can pretend don’t exist. It takes courage and vulnerability. It’s hard to be empathetic towards a person we don’t understand. But empathy can be a learned trait, a practiced skill like any other, and it’s crucial we do this work. Inti is someone who has immense empathy for the natural world around her but she’s lost her faith in people; this book is a journey towards rediscovering that capacity for understanding, for trust.

BTW: What was your research process like? Did anything surprise you?

CM: A large portion of my research was about wolves, and the people who work to reintroduce them to places where they’d previously been wiped out. I took huge inspiration from the biologists who worked on the Yellowstone reintroduction project, and am very grateful that so many of their personal accounts have been shared and published. One of the things that struck me was how individual the wolves’ personalities were. They were extraordinary. So different and varied, their behaviours almost human, surprising, mysterious, loving and so courageous. I just fell in love with them, and knew I needed to try and create such distinct presences for my wolves, too.

CM: If I tried to tally up the books I have bought from indie bookstores over the course of my life I might drown in a sea of them. And each and every one of them has influenced me in some way, has played some role in shaping me as a writer and a person. So you could say they’ve had a very important role! On top of that, I could not be more grateful for the support indie bookstores have shown my own novels. It’s humbling and just wonderful, and I can’t thank them enough.