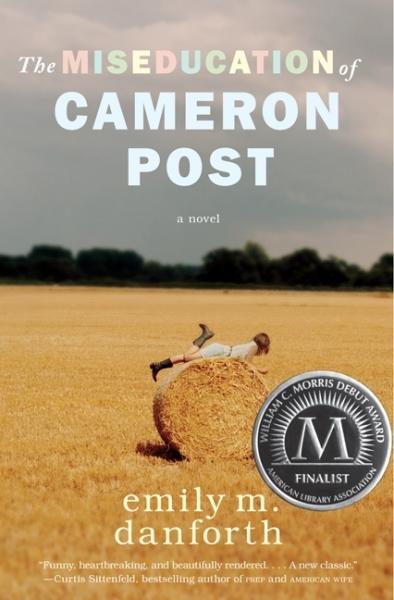 In response to the removal of Emily Danforth’s The Miseducation of Cameron Post (HarperCollins) from a high school reading list, Browseabout Books in Rehoboth Beach, Delaware, is giving free copies of the book to inquiring teens and is receiving resounding support and donations from the community, its book industry partners, and the pop culture website AfterEllen.

On June 12, the Cape Henlopen school board voted 6–1 to remove the novel, which appears on the Blue Hen reading list, 10 titles compiled by the state’s public librarians and deemed age appropriate for students entering their freshman year of high school.

Following the board’s decision, the book became a popular purchase at Browseabout, and the store, which ordered its own supply to sell, has since received boxes of donated books to give away. Among the contributors have been readers of AfterEllen, a website featuring mainstream and pop-culture stories for a lesbian and bisexual audience; the book’s publisher, HarperCollins; and local community members, including Cape Henlopen School teachers and school board members. More than 100 free books have already been distributed.

Browseabout manager Susan McAnelly and assistant manager Alex Colevas have stressed that the store strives not to alienate any customers, but they are committed to providing a wide range of reading options in the store’s large kids’ section. “We feel that offering to serve as a hub for donations of Cameron Post is very much in line with our mission to serve our community by providing them with a diverse selection of titles covering a wide variety of viewpoints,” McAnelly and Colevas said.

The 2012 novel details the life of teenager Cameron Post as she attends a religious conversion camp to cure her homosexuality. The school board cited the use of strong profanity in the book as the reason for removing it from the reading list. But in its letter to the Cape Henlopen school board, AfterEllen noted that plenty of titles on the same list, including John Green’s The Fault in Our Stars (Speak) and Rainbow Rowell’s Eleanor and Park (St. Martin’s Griffin), use profanities but none features a lesbian relationship. “As writers and readers, we feel it is incumbent upon us to point out the logical inconsistency of this assertion, and suggest that it is the book’s depiction of a young woman discovering her identity as a lesbian with which the board took issue,” AfterEllen staffers argued, and they asked the board to reinstate the title or remove the other books with similar language.

In a July 9 letter, the Kids’ Right to Read Project (KRRP), which is co-sponsored by the National Coalition Against Censorship and the American Booksellers Foundation for Free Expression (ABFFE), highlighted the fact that in removing the book from the reading list the Cape Henlopen school board violated district policies, which require a written complaint and a review committee to formally evaluate the book’s merits. KRRP called on the school district to consider the book as a whole and to reverse its decision. “An author’s broad moral vision, total treatment of theme, and realistic portrayal of characters and dialogue are ignored when protesters focus only on aspects that are offensive to them,” KRRP said, and the passages cited by the school board do not “provide insight into its educational and literary quality, which must be the focus of school officials responding to such challenges.”

McAnelly and Colevas said that the outpouring of support, ranging from media coverage in Delaware and beyond to advocacy efforts by various industry groups and members of the local community, has been tremendous. “Honestly, we have been shocked at the response to this entire situation. It never even occurred to us that we were doing anything out of the ordinary,” they said, adding, “We are extremely proud (but not surprised) that our customers have supported us 100 percent. We have had nothing but positive feedback online and in-person.”

ABFFE President Chris Finan, who offered  the organization’s help to Browseabout Books in handling the situation, commented, “ABFFE congratulates the owners and staff of Browseabout Books. It takes guts to take a stand against censorship. Their experience shows again that when a bookstore fights for free speech the community follows.”

As Browseabout continues to distribute the donated books to teenagers, McAnelly and Colevas have heard back from one teen in particular who said that the title has changed her life. “The book made her feel less alone, and her only wish was that she had read it sooner,” McAnelly and Colevas said. “She felt this book was a ‘bridge to empathy’ that every teenager, gay or straight, should read. That is enough confirmation for us that we made the right choice regarding our response to this situation.”

The Miseducation of Cameron Post will be on the agenda at the Henlopen school board’s July 24 meeting, the Cape Gazette reported.