Indie booksellers nationwide have chosen Brigid Kemmerer’s A Curse So Dark and Lonely (Bloomsbury) as a top pick for the Winter 2018–2019 Kids’ Indie Next List.

In kingdom of Emberfall, Prince Rhen grapples with a curse bestowed upon him by a powerful enchantress: he must repeat 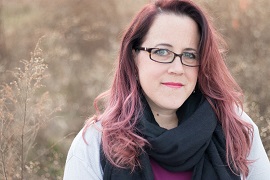 the autumn of his eighteenth year until a girl falls in love with him. In Washington, D.C., Harper’s mother is dying and her father has disappeared, leaving her family at the mercy of violent loan sharks who are expecting payment sooner than they can give it. When Harper finds herself trying to save a woman on the street in the middle of the night, Emberfall and D.C. collide.

“A Curse So Dark and Lonely is billed as a retelling of Beauty and the Beast but it is so much more than that,” said Carrie Deming of The Dog Eared Book in Palmyra, New York. “Yes, there is a cursed kingdom, a prince that turns into a monster, and a girl he hopes will love him and break the curse. But the girl is from modern D.C. and has cerebral palsy, which is part of her but does not define her, and she becomes a badass who completely changes the game. This book is nonstop action from the opening sentence to the last paragraph. I fell in love with all of the characters and the world they inhabit. I really, really hope there is a sequel, as I will be first in line to read it!”

Bookselling This Week: Why did you choose to retell Beauty and the Beast? 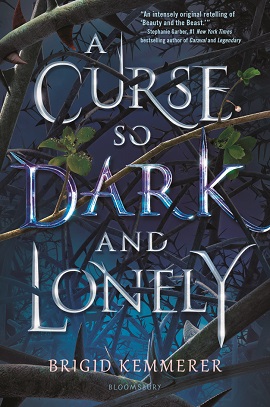 Brigid Kemmerer: It’s one of my favorite fairy tales ever. When the animated Disney version of Beauty and the Beast came out, I was the kid who would stalk the Disney Channel commercials because I could not wait to see the trailer. This was before YouTube, so the only time you could see it was if you could catch it live. There’s just something compelling about a story where, at its core, it’s not about falling in love with someone for what they look like, but falling in love with them for who they are. That transformation and allowing somebody to show you their true self is just very romantic to me.

BTW: How did you craft Harper’s character?

BK: I really wanted a different heroine from the typical girl that you usually see in a Beauty and the Beast retelling, where the girl is very gentle and soft and kind, and convinces the Beast that he doesn’t have to be the big, dangerous beast. The more I thought about the curse, I started thinking about how a lot of the time what one person sees as a curse another person might not at all. I really wanted to play with this idea of how Harper could have all of these challenges in her life, and some things she would see as a challenge and some things she wouldn’t. On the flip side of that, you’ve got Rhen and his own challenges with the curse. It was a lot of fun pitting them against each other in that way.

Young adult literature, in general, is really about finding yourself as a teenager and figuring out who you’re going to be. Usually in a YA novel, you have characters who start the book with their entire life controlled by the adults around them and they finish the book realizing that they can also exert their own control over the world. Harper has cerebral palsy, her brother is doing some unscrupulous things to try to protect their family, her mother is dying, and her father has run off because he can’t deal with all the pressure. Harper has always been the younger sister and, by virtue of having cerebral palsy, has always been protected and lived in the shadow of her older brother. For the first time, she doesn’t have her older brother. She wants to figure out, just how powerful is she? How much can she do? It was a lot of fun writing her, trying to figure out how far she would go and the kinds of things she could do.

BTW: How did you research the effects of cerebral palsy for Harper’s character?

BK: One of my best friends growing up was a woman named Erin. She reads all of my books and we talk a lot about writing, and she said to me once, “Oh, put me in a book.” When I started writing this book, I realized a character like Erin would make for a great heroine in a YA novel. As far as research is concerned, I talked to Erin about her experiences, a lot of which I knew just from growing up with her. We had a lot of e-mail and text exchanges, which were fun because I would text her things like, “If someone’s life were in danger and you were riding a horse, could you leap off the horse and tackle someone?” And she would say, “Yes!” I also talked to two different pediatricians to make sure that medically things were being portrayed accurately. Ultimately, I had a sensitivity reader once the manuscript was complete, and I took any kind of feedback she had into account because I wanted to make sure I was portraying Harper as authentically as possible.

I have an author’s note in the back of the book because cerebral palsy has a wide range in terms of how it affects people. I wanted to make sure readers know this is not the only way cerebral palsy could affect somebody. It’s really just down to Harper’s character. I wanted to be as true to the condition as I could.

BTW: How did you craft the book’s romantic element?

BK: So, I like a slow-burn romance. I’m not big on the whole love-at-first-sight kind of thing, and especially with a story like Beauty and the Beast, I feel like it’s very easy to get caught up in the whole Stockholm syndrome thing. So, Rhen really needed to prove himself to Harper, and Harper really needed to prove herself to him, because he had tried so many times and had failed so many times and didn’t really know what he was doing or who he was, either. I just let it develop as naturally as I could.

BTW: Why did you decide to merge the world of Emberfall with Washington, D.C.?

BK: A lot of books that I used to read had fantastical creatures living secretly in our world. I was always a big fan of the portal fantasy and there haven’t been a lot of books that have that kind of merging of our world with a fantasy world. I really wanted to write one, and I’m so glad that I did and I get to share it with other people. I love the idea of a bridge from our world, which feels mundane and boring and sometimes too challenging, that leads to some place completely fantastic with magic and fairytale princes.

BK: Right now, I have two books in the works. I have the sequel to Curse, which is slated to come out in January 2020 and we have not announced the title yet. I’m really excited about it because we learn some really interesting things about Gray. It turns a lot of the characters that you know and love from Curse on their head and you see them in a new light.

The other book I have coming out in summer 2019 is a contemporary YA called Call It What You Want, and the super quick way I describe it is Robin Hood set in high school.