Devoted fans of John Green will be attending midnight release parties for his latest young adult novel, Turtles All the Way Down (Dutton Books), at indie bookstores nationwide next week. 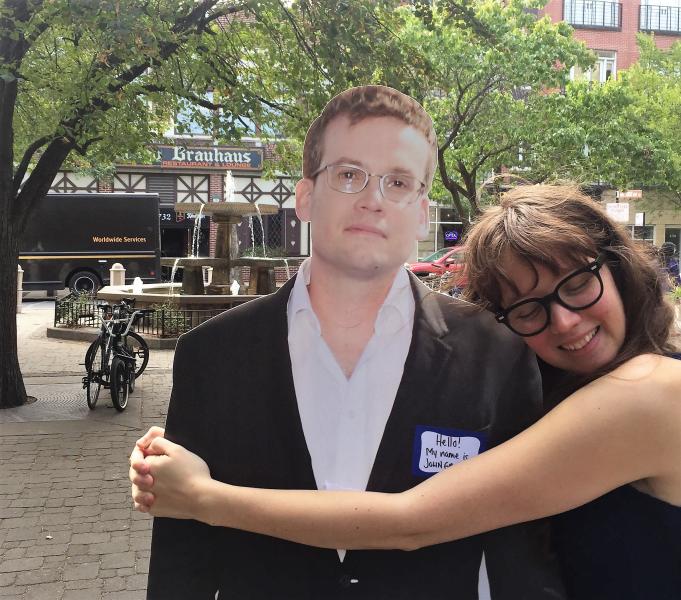 A midnight release party at the Book Cellar in Chicago will let fans of John Green, like bookseller Portia Turner, pose with a cardboard cutout of the author.

Bookseller Suzy Takacs counts herself among them, and she will be as giddy as the rest of Green’s fans when they gather at the Book Cellar in Chicago at 10:00 p.m. on Monday, October 9, to await the book’s midnight release.

“We have boxes and boxes ready to go,” Takacs said. “He just established this type of uberfan, and they just want the book as fast as possible.” 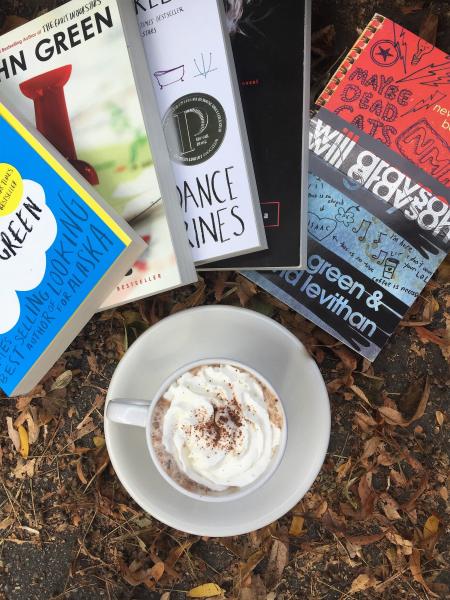 The launch party will feature a variety of John Green-themed treats and entertainment, including lattes inspired by the classic chocolate-caramel-nut Turtles candy, a cardboard cutout of Green for selfies, and a bowl of special-ordered, turtle-shaped green gummies.

Apart from being the first to read Green’s latest book, Takacs said the biggest treat for her customers will be meeting with other John Green superfans, known as Nerdfighters.

Similar parties will be happening across the country as Green’s fans await his first book since the 2012 New York Times number-one bestseller The Fault in Our Stars.

Green’s novels feature teenagers facing tough life situations, like cancer, with grit and humor. His newest book tackles mental illness and a mysterious disappearance. “If you get a bunch of John Green fans together, they have a lot to talk about,” Takacs said.

Green, whose books have sold 50 million copies worldwide, is also the author of Looking for Alaska, An Abundance of Katherines, Paper Towns, and Will Grayson, Will Grayson (with David Levithan).

The Book Cellar will have signed copies of many of those titles thanks to a personal connection to the author.

“He used to live down the street, so he did a bit of writing in our café. When he was a new author, we did some events together,” Takacs said. “We are fiercely loyal. He’s a great guy. He’s very genuine and thoughtful. We’re happy we were there when he was beginning and happy that he’s now a worldwide success. It’s a writer’s dream come true to accomplish what he’s done.” 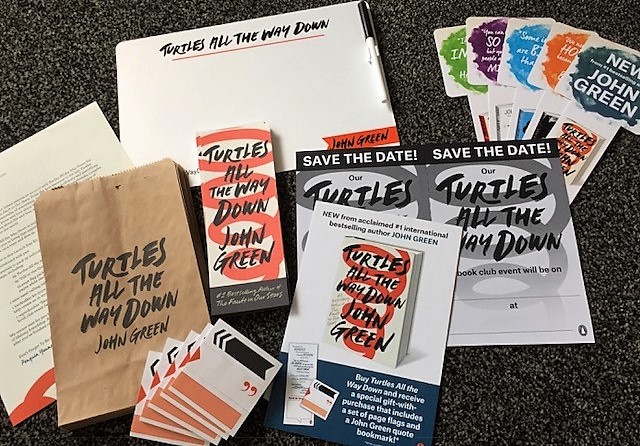 Penguin Books imprint Dutton, Green’s publisher, is sending out launch party kits to about 500 independent bookstores. They include a white board with pens for fans to write messages on and pose with for selfies, goody bags for customers containing bookmarks and page flags, as well as printed materials so stores can set up displays.

Green himself will not be attending any midnight launch parties, but is planning a 19-city tour, partnering with indie booksellers at many of the stops.

“It’s been over 10 years since John Green published his debut novel, Looking for Alaska, and much has changed in the YA landscape. But one thing that has not changed is John’s admiration for and connection to independent booksellers, the community he has often cited as crucial in the launch of his career,” said Erin Berger, vice president and creative marketing director for Penguin Young Readers. “It’s been nearly six years since he published a new book, so it is a moment to celebrate — not just for his fans but for the bookselling community, who have been great supporters of his from the beginning. Our hope is not only to rally around the exciting moment of the publication of Turtles All the Way Down but to celebrate the conversation around books and do whatever we can to facilitate that within the bookselling community.” 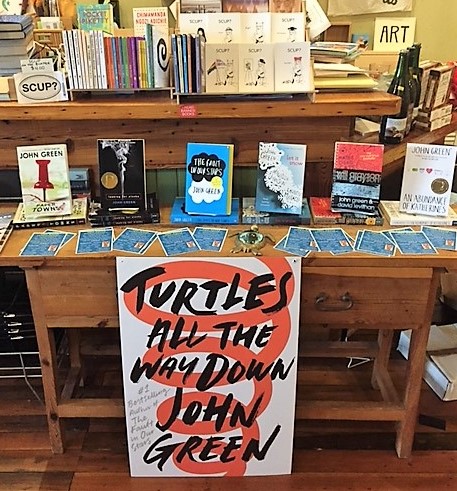 Scuppernong Books has a display promoting its “John Green Extravaganza!” on October 9.

Brian Lampkin, owner of Scuppernong Books in Greensboro, North Carolina, is planning a “John Green Extravaganza!” for October 9, starting with a showing of the 2014 movie version of The Fault in Our Stars at 7:00 p.m. at the historic Carolina Theatre. Tickets will be $7 for adults and $6 for students, teachers, seniors and military, and will come with a chance to win a signed copy of Turtles All the Way Down.

After the movie, attendees are invited to walk over to Scuppernong Books for a trivia contest with prizes, a station to write letters to invite John Green to Greensboro, and servings of chocolate Turtles candy.

The store will also show the YouTube videos that have made John Green and his brother, Hank, stars far beyond the bookshelves. Dubbed the Vlogbrothers, the pair have spent a decade making videos that have more than 3 million fans. They have branched out into educational video channels and an annual charity drive called the Project for Awesome.

As the parent of 15-year-old twins, Lampkin said he’s seen first-hand the connection teens have with Green’s books. 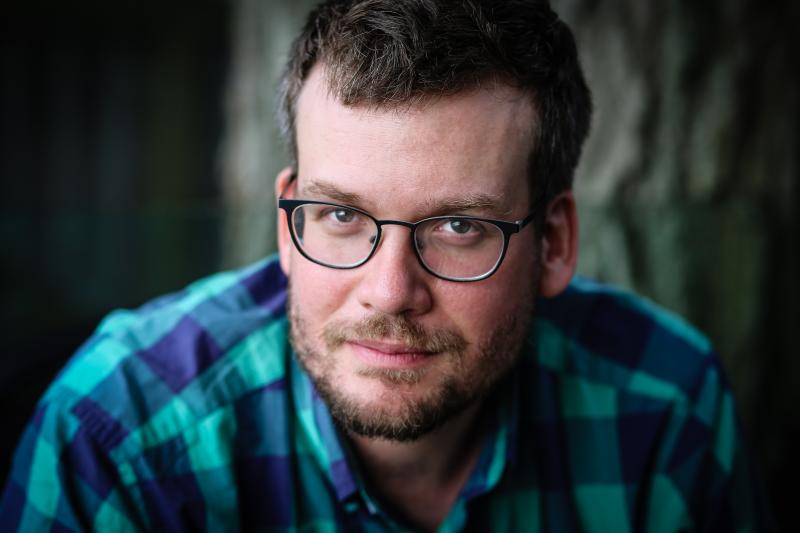 “When The Fault in Our Stars first came out, they said, ‘Dad, you have to read this.’ It mattered to them,” he recalled. “I really respect and like John Green, and I am happy to do a John Green event. To do successful events, you have to do something that matters to the people that work there.” That will include his daughters, who have promised to bring all of their 10th-grade friends along.

Both Lampkin and Takacs said the only other time they’ve done midnight release parties was in summer 2016 for the debut of Harry Potter and the Cursed Child by J.K. Rowling, Jack Thorne, and John Tiffany (Arthur A. Levine Books).

“People still talk about it, and say, ‘Do you remember all those people?’ It was fun, it was crowded, and it was a great night,” Takacs said.

She’s hoping the John Green event will have a similar resonance with her customers. “It builds good spirit in the community. It’s good for book sales. It’s fun for the staff,” she said. “It gives us a way to concentrate our energy about something we’re already excited about.”