Many booksellers are continuing to implement environmentally conscious initiatives and practices at their stores, in step with how ideas of sustainability and climate change have permeated the public consciousness in recent years. 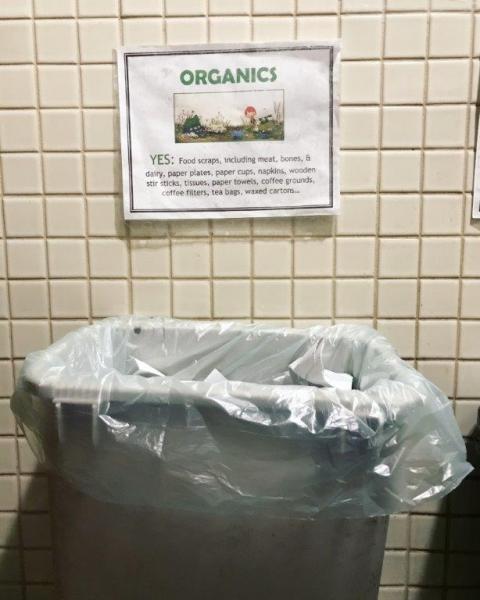 Composting guidelines are posted in the bathroom at Minneapolis' Wild Rumpus Books.

Among those independent bookstores taking action to become more eco-conscious and sustainable are Wild Rumpus Books in Minneapolis, which takes part in the city’s residential organics recycling, or compost pick-up, program, according to owner Collette Morgan. About five years ago, the city began collecting compost in a few different neighborhoods; since then, the program has expanded to the entire city. As of May 15, 42 percent of Minneapolis Solid Waste & Recycling customers (44,900 households) have signed up for the program; for those not participating, the city also has seven organics recycling drop-off sites.

Each participating home or business is issued a large compost receptacle, which is similar to a regular garbage pick-up receptacle; then it is up to the participant to separate out their compost from regular garbage. The compost is picked up each week by the city’s Solid Waste & Recycling Department crew, but the individual business or home manages the level of their involvement in the program, said Morgan.

“For the store, it was easier for us to get started because we already recycled, so that was not an issue, but composting is much more picky in terms of what you can put in,” said Morgan. For Wild Rumpus, which is located in one of the first ZIP codes chosen to participate in the compost pick-up pilot program, she said, educating the public was one of the hardest parts.

“It wasn’t so much our employees — we know what can be composted and what can’t — but we had to put a lot of signage up when we first started. For example, in the bathroom we have one garbage can for garbage and then one for composting, and we have a sign above the composting one that says, ‘For paper towels, etc.,’” said Morgan. “During that first year, before we took it out to the street, we would have to go through the bag and get rid of the things that people threw in there that were not compostable and put them in the garbage. But I think it’s better now.” 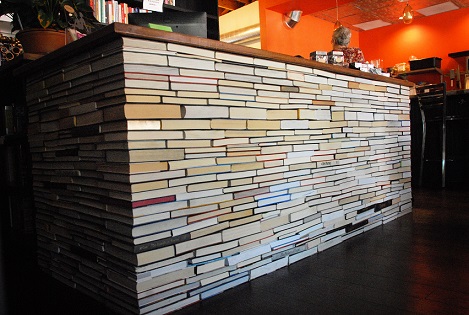 A desk made out of recycled books at BookBar in Denver

Items that go into the composting bin include non-recyclable and food-soiled paper, pizza boxes and other cardboard packaging, fruits and vegetables, bones and meat, and eggshells, but the bulk of Wild Rumpus’ compost is probably paper towels, said Morgan. Other items that can be composted include lint and other food scraps from pets and people.

Wild Rumpus is home to many pets, including a ferret, chickens, a tarantula, and cats, but the store does not compost litter or feces from these animals. While the store doesn’t create a huge amount of organic waste, it does produce “more than a bookstore that doesn’t have animals would create, but not nearly as much as a restaurant,” Morgan said. These days, the city also requires restaurants to use take-out containers made out of compostable materials, including all boxes, packaging, and coffee cups.

“I think people in Minneapolis have a positive impression of the composting program,” said Morgan. “It took a little getting used to, but now I think people really buy into it because it has spread throughout Minneapolis and now it’s spreading out to the suburbs. People in the outer suburbs are saying, ‘Why don’t we have compost pick-up?’”

Bookseller Erica Bollerud is deeply involved in environmental work, holding both a full-time time job at the Environmental Protection Agency (EPA) and a part-time position at Books With a Past, which has locations in Glenwood and Savage, Maryland.

“At Books With a Past, I’m looking at changing our recycling service provider to one that will take mixed recycling to help the store increase our ability to recycle plastic and glass,” said Bollerud.

For booksellers who want to make their stores greener, Bollerud suggests buying energy-efficient lighting and appliances, recycling packaging, and using paper bags rather than plastic; at Books With a Past, she said, customers who bring in their reusable Books With a Past bags receive a 10 percent discount.

Bollerud also suggested that booksellers reach out to their elected officials to show support for existing bills or programs that help retailers implement sustainable business practices. This can be especially helpful when applied to officials on the county and municipal levels, like mayors and chambers of commerce, she said.

In Albuquerque, New Mexico, Page 1 Books recently announced that the store had switched to using tokens instead of print coupons for their membership program in order to be more eco-conscious.

As the store explains in a recent newsletter, “We’ve moved away from print coupons to be more environmentally friendly! Instead, we have Membership Tokens that cost a one-time $5, work as forever coupons ($5 off purchases of $30 or more), and give you access to exclusive deals and specials throughout the year!”

The Page 1 program also lets customers use their old coupons, no matter the month or year they were issued.

In Vermont, Northshire Bookstore owner Chris Morrow installed solar cells on the roof of his Manchester Center store to generate energy. Northshire, which also has a location in Saratoga Springs, New York, is one of several bookstores that use solar panels, including Antigone Books in Tucson, Arizona, and MainStreet BookEnds in Warner, New Hampshire. The 16-kilowatt PV system installed in 2011 through the state’s Sustainably Priced Energy Enterprise Development (SPEED) program supplies approximately 10 percent of Northshire’s electric needs, according to Morrow. A couple of years ago, he also installed three electric charging stations in the Manchester store parking lot for electric cars.

Morrow, an ABA board member, has always been interested in climate change and appeared on ABA’s first-ever panel on the topic at Winter Institute 2017 in Minneapolis. In-store, Northshire carries a wide selection of books on climate change and hosts education sessions, including previous events with author and environmental activist Bill McKibben.

Morrow and his daughters also attended the massive People’s Climate March in Washington, D.C., on April 29, which was sponsored by 350.org, the environmental advocacy organization co-founded by McKibben. The store donated $1,000 to 350.org for a bus to pick up people for the march.

According to BookBar owner Nicole Sullivan, the Denver, Colorado, store has implemented a host of environmental initiatives that have helped the store stay green and save money since opening four years ago. In January 2016, Certifiably Green Denver, a free program offered through Denver’s Department of Environmental Health’s Environmental Quality division, even named BookBar January’s Green Business of the Month.

“It does help that we are only four years old, so we have kind of been able to start from scratch with the idea of the importance of green as part of our goal and our business plan,” Sullivan said. “When we moved in, we updated everything — the electrical, the HVAC system — so that it would be more efficient. The next thing we did was replace the track lighting, which was really old and very inefficient. Since then, we’ve slowly been changing the bulbs over to LED bulbs for their longer life.”

“There is a whole checklist that you go through and then they give you recommendations about anything you are missing. We found that because we had updated everything so recently — the plumbing and hot water heaters as well — we were already almost to a green certification,” said Sullivan. “We didn’t have a whole lot left to do, so it was fairly easy for us to get certified…We sit down with Certifiably Green once a year to go through the checklist and make sure we’re still in compliance, and they might give us some more tips about other things we can do.”

Since then, Sullivan said she has been encouraging other businesses to get certified as well: fulfilling the requirements can make businesses more energy-efficient and can help save money in the long-run, but it’s also good publicity, she said. Businesses receive a window decal identifying them as a certified green business and are listed on Certifiably Green Denver’s website.

In 2015, BookBar expanded into the older part of the building, constructed in 1896, and created an outdoor patio and raised garden beds, which has allowed the store to grow a lot of their own food on the menu, like herbs and vegetables. Anything they can’t grow themselves they try to get from the local farmers’ market, Sullivan said.

“As far as our to-go items for food and drink, we decided it was worth the investment, even though it was a little more expensive to go green. From an environmental standpoint, it’s well worth it,” said Sullivan. “BookBar’s to-go items — cups, lids, cutlery — are all recyclable or compostable.”

In addition to composting, the store has bike racks to encourage people to bike to the store and regularly donates to green organizations, including sponsoring a recent green forum in Denver. BookBar also purchased a bookmobile last December, which is used, in part, for book donations, and staff uses old or unusable books to create book art, including a desk made from old textbooks and outdated computer books that would have otherwise ended up in a landfill.

Booksellers can check out this list of books about climate change, which was generated by panelists for the “Climate Change and Retail Trends” education session at this year’s Winter Institute.