Hurricane Irene left a mess that will take months to clean up. From North Carolina to Vermont, the storm destroyed businesses, washed out roads and bridges, and left some towns unreachable and 3.3 million people and businesses without power. There were at least 40 storm related deaths. 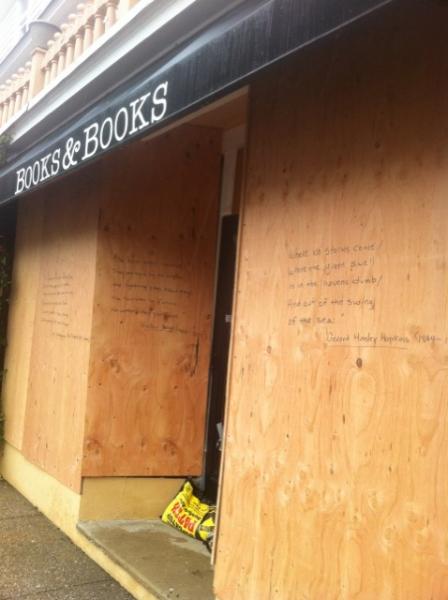 At bookstores on the East Coast, Irene’s effects varied. Most survived intact and reopened within a day, but several were severely damaged.

The hurricane’s path left some North Carolina stores in the Outer Banks destroyed or unreachable. “We’ve had four feet of water,” said Steve Brumfield, the owner of Manteo Booksellers in Manteo. “The store is pretty well shut down. We’re trying to survive and see if we can salvage enough to sell and get some bills paid. We probably can’t reopen in this spot again. It’s flooded too many times.”

Community response has been a bright spot for Brumfield. “Everyone’s been amazing,” he said. “People have called, stopped by, brought food and checks. Quite a few people have spent the whole day packing, slogging through a wet, muddy, gross-smelling place.”

Although Brumfield has found a temporary place to sell books, since the area is still without power, he said it would be rough going. Brumfield is asking booksellers who can offer advice about how to respond to severe flooding to contact him through ABA Member Relationship Manager Kaitlin Pitcher, who will provide them with Brumfield’s phone number.

At Duck’s Cottage in Duck, North Carolina, staff was still waiting for the restoration of power on Wednesday to start clean-up and some storm-related repairs. “In the grand scheme of things, this could have been much worse,” said Allen Lehew in an e-mail update. “But Irene left us a mess to clean up before we can get back to the business of serving our customers.”

Gee Gee Rosell, the owner of Buxton Village Books on nearby Hatteras Island, said that she has received reports that her bookstore was still standing, but since no one can currently travel to the island, she does not yet know the condition of the bookstore.

In Maryland, Annapolis Bookstore, which sells new, used, and rare books, is open, except for its flooded lower level. “Our electricity was out so our sump pumps weren't working,” said Mary Adams. “Unfortunately, we lost a significant number of books, some quite valuable.

“Electricity was out for two days so we also lost revenues for what would normally be a very busy weekend for us. On top of all that, a huge tree fell, knocking out part of our new fence. All in all though, we were very lucky.” Adams, whose store is insured by LIBRIS, said the ABA insurance company has been especially attuned to their needs.

In Richmond, Virginia, Kelley Justice said she felt fortunate that both her home and The Fountain Bookstore had no damage, but she was “very concerned about her customers,” who were already contending with a difficult economy and now have to deal with the hurricane’s aftereffects.

On Tuesday, Sarah Pishko at Prince Books in Norfolk, Virginia, said that business was getting back to normal after the store was closed Saturday and Sunday. “Sunday was beautiful, but I had evacuated (we live in a Category 1 flood zone), and it was too much for my small staff to make arrangements to open the store, as the storm was still around at 3:00 a.m., and one doesn’t sleep well when it’s so windy!”

Although areas of New Jersey were severely flooded, Clinton Book Shop avoided being damage. “We took every precaution that we could,” said Harvey Finkel. “The water reached the door but never entered the shop. We have just completed putting it all back together.”

Words in Maplewood did “brisk business,” until it closed early Saturday, said Jonah Zimiles. “We were also quite busy after opening Sunday at 2:00 p.m. There is lots of damage in our town, but not to our store.”

In New York, Books & Books Westhampton Beach was open late Sunday and fully operational on Monday despite a foot of surge water on Westhampton’s Main Street.

Word in Brooklyn, which is one block from a river and in the frontline evacuation zone, was “especially lucky” with no damage or flooding, said owner Christine Onorati. “We actually had a pretty decent weekend all in all!” Pictures of their creative window taping appeared on the Rachel Maddow blog.

The Golden Notebook in Woodstock suffered no damage, but was closed Saturday and Sunday, and at press time still had no power. The store is open, but conducting business under “challenging conditions,” said owner Paul McMenemy.

Connecticut booksellers reached by BTW had no damage, although most had some business and power interruption. “There is no damage to the store, but the entire town of Ridgefield was without power for two days,” said Darwin Ellis of Books on the Common. “Now, the central business district has power restored but most residences do not.”

Mystic, Connecticut’s Bank Square Books prepared for the worst. Mystic, a seaside town, can easily flood at high tide when there are heavy rains, said owner Annie Philbrick. “Thankfully we did not get the rains, so there was no flooding.” The bookstore and downtown Mystic were still without power on Tuesday, but Bank Square was open and serving customers.

In Massachusetts, Harvard Book Store and Newtonville Books were fine. Sarah Rettger of Newtonville said, “We had a busy Saturday, between a used-book buyback (scheduled before Irene ever thought about approaching New England) and plenty of customers who braved the rain to stock up on books and booklights. We're very grateful that the storm damage was limited in our area, and we're back to business as usual."

In Vermont, where some of the worst flooding occurred, Bartleby’s Books was under four feet of water and was thought to be destroyed. However, Lisa Sullivan recently reported that the building might be saved. “An army of volunteers showed up at Bartleby’s yesterday and helped us salvage the top shelves of books and emptied the store of everything else,” she said. “We are hoping to reopen for the holiday season.  The town has basically been destroyed, and we are working hard to rebuild everywhere.” The news was especially sad since Sullivan’s other bookstore, The Book Cellar, was destroyed by a fire this past spring.

Bridgeside Books in Waterbury, Vermont, rode out the storm.  “We are very fortunate as many businesses and homes have been devastated here in Waterbury,” said owner Hiata DeFeo. “It's pretty heartbreaking to see our beautiful, vibrant community torn apart.”

The Galaxy Bookshop in Hardwick escaped with just some basement flooding, said Linda Ramsdell. “It is messy but very manageable.”

Northshire owner Chris Morrow told BTW, “We lost a big sales day on Sunday, but had no damage to the store.”  Many roads were washed out, some employees got hit hard, and it certainly wasn’t good for the local economy, he said, “but no lives lost right around here.”