Banned Books Week, the annual event celebrating the freedom to read, was held September 27 to October 3. This year’s theme declared that “Censorship Is a Dead End,” and in the midst of a global pandemic for the many bookstores participating across the country, Banned Books Week looked a little different from previous years. 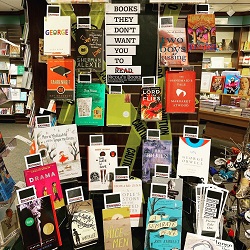 At Nicola’s Books in Ann Arbor, Michigan, and Schuler Books in Grand Rapids and Okemos, Michigan, booksellers took the challenge of the pandemic in stride and actually did more to celebrate Banned Books Week this year. Marketing Coordinator Alana Haley told Bookselling This Week that the stores read banned or challenged books during their weekly (now virtual) story times, hosted a virtual scary story night, and moderated a Banned Books Week panel discussion with Michigan libraries and booksellers.

Of the panel discussion, Haley said, “It was so informative, we all walked away learning something. Our hope with the panel is that those who watched even part of it walk away and start a discussion in their homes, families, and communities. All of these events started from a point of wanting to educate our customers, and we hope that’s what they take away.”

In addition to the virtual events, the stores created signs and bookmarks to decorate their displays. “Our booksellers always create fantastic displays that generate interest in-store,” said Haley. “The bookmarks actually open and give the theme of this year’s Banned Books Week as well as list the top 10 challenged books of 2019.”

Each year, the American Library Association (ALA) releases its Top 10 Most Challenged Books list. As in years past, the 2019 list highlighted how attempts at censorship often hit marginalized voices the hardest. Eight of the 10 most challenged books of 2019 were challenged, banned, or relocated in part because of LGBTQIA+ content. The list includes books that can help readers, especially young people, understand and navigate tough situations, such as George by Alex Gino (Scholastic); Beyond Magenta: Transgender Teens Speak Out by Susan Kuklin (Candlewick Press); Sex Is a Funny Word by Cory Silverberg and Fiona Smyth (Triangle Square); I Am Jazz by Jessica Herthel, Jazz Jennings, and Shelagh McNicholas (Dial Books); and Drama by Raina Telgemeier (Graphix). 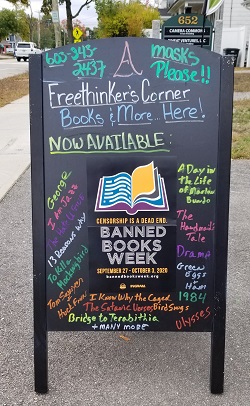 Chris Upton of A Freethinker’s Corner in Dover, New Hampshire, told Bookselling This Week that he was struck, though not very surprised, that most of the books on the ALA’s top 10 list were LGBTQIA+ themed books.

In lieu of the store’s usual display, Upton took to social media to tailor Banned Books Week to the now-virtual world. Upton posted one or two books from the ALA’s 2019 list per day, tagging the authors and providing a synopsis of the book and the reason it was banned or challenged. Despite going mostly virtual, A Freethinker’s Corner also made sure to bring attention to Banned Books Week in real life with a sign outside the store for passersby, featuring the slogan “Censorship is a Dead End” surrounded by notable banned titles.

“For us, Banned Books Week isn’t for just one week out of the year,” said Upton. “Because of our store’s mission to provide books that encourage individual growth, we feel these books are a vital part of that mission. We are also committed to challenging censorship, as I believe most bookstores are as well. We have many banned and challenged books on our shelves, so we will be continuing to highlight a few of them every day, with the reasons for their ban/challenge, for the entire month of October.” 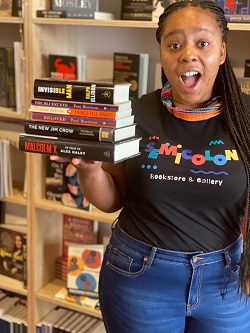 “It’s #BannedBooksWeek and we were amazed at all of the titles that have been banned at one point or another,” wrote Semicolon on Instagram below a picture featuring a bookseller holding a stack of banned books by Black authors. The books included The Autobiography of Malcolm X by Malcolm X and Alex Haley (Ballantine Books), The New Jim Crow by Michelle Alexander (New Press), Things Fall Apart by Chinua Achebe (Penguin Group), and The Bluest Eye by Toni Morrison (Vintage).

“We’re now on a quest to make sure we’re carrying all of the banned Black authors ALL of the time!” Semicolon continued in the caption.

Semicolon encouraged followers to comment with some of their favorite banned books, which elicited responses such as I Know Why the Caged Bird Sings by Maya Angelou (Ballantine Books); Their Eyes Were Watching God by Zora Neale Hurston (Harper Perennial); and Roll of Thunder, Hear My Cry by Mildred D. Taylor (Puffin Books). 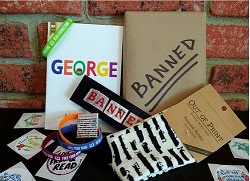 In addition to tweeting a short video clip advertising the Banned Book Bundles, Portkey Books also directed followers to “celebrate your freedom to listen to #BannedBooks” with Libro.fm’s Banned Books Week playlist. The playlist collected some of the most challenged books in the U.S. in one place for book lovers to listen.

Banned Books Week launched in 1982 in response to a sudden surge in the number of challenges to books in schools, bookstores, and libraries. Typically held during the last week of September, it highlights the value of free and open access to information. Banned Books Week brings together the entire book community in shared support of the freedom to read. By focusing on efforts across the country to remove or restrict access to books, Banned Books Week draws national attention to the harms of censorship, especially when aimed at silencing Black, Indigenous, People of Color (BIPOC), LGBTQIA+, and other historically oppressed voices.