Nearly 4,000 young readers and their families, hundreds of teachers and community volunteers, and 40 authors and illustrators will gather at a convention center in Buffalo, New York, next month for the third Western New York Children’s Book Expo. 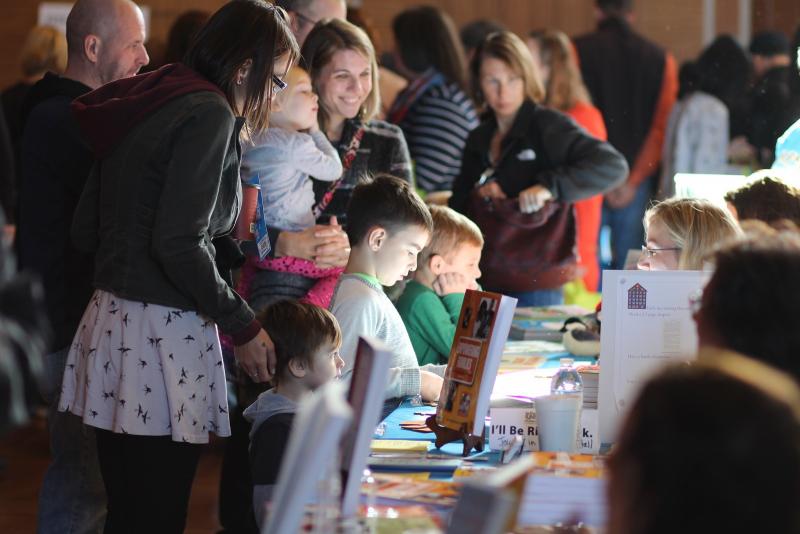 Children and families interact with authors at the 2016 WNY Children's Book Expo.

The November 11 event caps a week of authors and illustrators visiting 70 area schools, libraries, museums, and other venues, where they will interact with more than 20,000 children. The extravaganza is the brainchild of a local independent bookseller named Kim Krug, who was determined to start a book festival and wasn’t afraid to knock on doors to find sponsors.

When Krug and her mother, Kathleen Skoog, opened Monkey See, Monkey Do…Children’s Bookstore in Clarence, New York, nine years ago, their dream was to get kids excited about reading. Since then, a mix of author visits, princess storybook parties, Magic Treehouse camps, book clubs, “Monkey & Me” programs, and other events have turned the suburban bookstore into a success.

“My passion is coming up with creative ways to engage a reader,” Krug said. “Start at the ground up, start when they are itty-bitty, and get them excited about reading.”

Then Krug’s dream got bigger. What if she could bring a children’s book festival to the city of Buffalo, where resources are scarce and author visits are few?

“Every day you turn on the news and hear about the dysfunction in Buffalo public schools and the illiteracy rate in our community,” she said.

Krug detailed her dream in a letter to author James Patterson, who pledged in 2014 to award $1 million in grants to indie bookstores for creative programs. A week before Christmas that year, she got a note from Patterson and learned that Monkey See, Monkey Do had won $8,500.

“Up until that point, it was a dream. It was a wish,” Krug told BTW. “I am so grateful that I didn’t know what I was getting into because I probably would have stopped at the check and said, ‘Thank you, but no thank you.’”

The first step was finding a venue centrally located in the city. After plenty of phone calls, Krug picked Kleinhans Music Hall, which charged $4,500 for the space plus another $500 for extras. With just $3,500 left, Krug knew she had to solicit donations to pay for authors’ fees, transportation, and expenses. She first turned to BlueCross BlueShield of Western New York, where she had previously worked. This year, BlueCross is still the largest sponsor, providing $15,000 of the $80,000 budget for the 2017 event.

Outreach to potential sponsors is a big part of her effort, Krug noted: “We have been passionate with putting on our sales caps and saying, ‘Literacy matters in Western New York. Can you help us?’”

Krug also received donations from 50 corporate and small business sponsors in 2015, the Expo’s first year, when the event attracted 1,500 kids, parents, and teachers, and featured 36 authors. The 2015 keynote speaker was Susan V. Bosak, who read from her award-winning picture book Dream: A Tale of Wonder, Wisdom & Wishes, illustrated by Leo and Diane Dillon and 13 others (TCP Press).

“Our first-year theme word was ‘Dream.’ We dreamed of having an expo, and it came true,” Krug said.

While Krug was happy with the size of that year’s turnout, she believed that not enough children from the city were present. “When we looked around the room, I was upset. I didn’t see enough diversity in the crowd,” she said. “So, the second year, I said, ‘How are we going to reach the kids in the city who really want this?’” 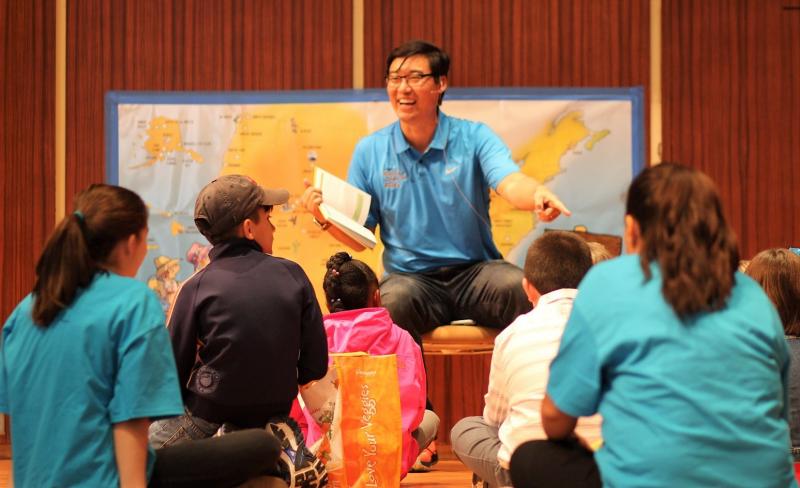 Extending the event into the classrooms was the answer, said Anne Ryan, executive director of

Read to Succeed Buffalo, a nonprofit that provides literacy coaching for children from preschool to third grade.

“Read to Succeed got involved to get the Buffalo schools on board as well. The schools are overwhelmed and don’t have time to focus on things like author visits,” Ryan said.

The need for reading support is critical in Buffalo with just 18 percent of third graders in city schools scoring as proficient on New York’s English language arts tests, according to the New York State Department of Education. Ryan said that without full-time librarians in the city’s schools, children may only get to the school library once every two weeks.

“These authors work with kids all the time. They know how to get them excited,” Ryan said. “Our goal is being the partner who can get author visits to every single kid in the Buffalo public schools.”

In 2016, Expo authors made 150 presentations at 46 schools in front of 23,000 children. Food manufacturer Rich Products, a major employer in Buffalo, gave $7,500 in 2016 to help pay authors’ expenses and to provide free books for the kids. This year, schoolchildren will instead receive a gift certificate entitling them to choose a book at the Expo. Rich Products is again on board as well as new sponsor Garman Family Foundation, which gave $9,000 toward school visits.

“Those sponsors that were with us the first year immediately signed up for year two and year three. That’s a wonderful feeling. They could see that what we were doing was making a difference,” Krug said.

This year, Buffalo’s Médaille College become a new sponsor in part because a professor of education there is a customer at Monkey See, Monkey Do.

“I met Kim a few years ago, and this woman has a heart of gold and a passion for literacy in the community and getting books into the hands of children. We connected right away,” said Mary Beth Scumaci, who is coordinating about 70 volunteers from the college to work at the Expo. They include students in the undergraduate and graduate education programs, alumni of the school, and staff from the communications team, who helped get the word out.

The Expo has also expanded this year to include a professional development workshop for teachers, which 35 of Scumaci’s literacy students will attend. The whole enterprise has “snowballed,” Krug said, with more volunteers and sponsors coming aboard and community interest and participation rising.

An art contest in coordination with national Children’s Book Week last spring encouraged Buffalo area kids to create a drawing for the Expo’s poster celebrating this year’s theme word, “Explore.” The winning artwork — featuring a monkey reading a book — was chosen by three of the illustrators attending the Expo. 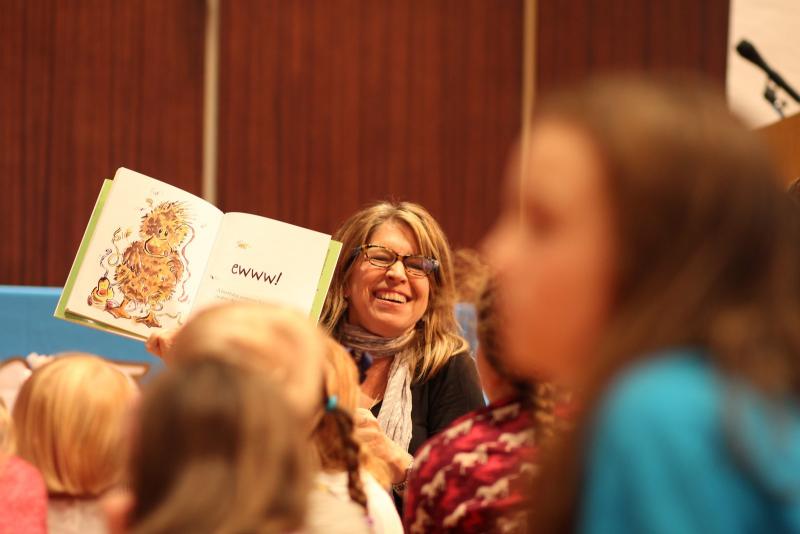 Author Doreen Cronin reads on stage during an interactive break-out sessions at Kleinhans Music Hall at the 2016 Expo.

All of the entries will be on display at the Expo, which moved this year to the Buffalo Niagara Convention Center. The center can hold the 4,000 attendees expected, up from 2,300 a year ago. The day will be filled with readings, book signings, presentations, and demonstrations geared to children ages three to 12. Admission is free.

Krug hopes the success of the Expo and KidsLit Week will persuade publishers to donate $7,000 to $10,000 to offset authors’ expenses.

“I’m going after these publishers next year. There is no reason we should not be on their radar,” she said. “The largest chunk of the budget is authors’ expenses.”

Next year’s event is already lined up for November 10, 2018. Eight authors have agreed to come so far.

“The feedback we are receiving from the authors is they can’t wait to get back to Buffalo,” said Krug. “We really take care of our authors. They want to get back to our city.”