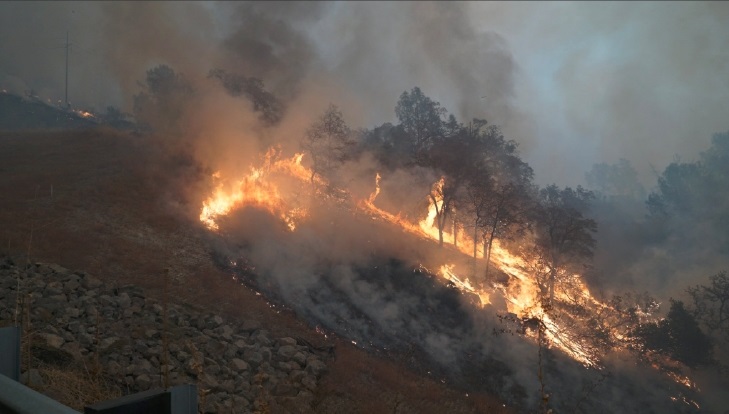 The independent bookstore community is responding to a growing catastrophe in California as three major wildfires menace the state. The Camp, Woolsey, and Hill Fires continue to create a disaster area thousands of square miles wide, making this California’s most destructive wildfire and third deadliest in history.

The Camp Fire, in northern California, is only 35% contained and has destroyed 7,600 homes and killed at least 48 people, with at least 200 more missing. Notably, the fire has destroyed most of Paradise, a town of about 27,000 people north of Sacramento. In southern California, tens of thousands of people have been forced to evacuate their homes as the Woolsey and Hill fires rage, with the former currently threatening around 57,000 buildings and the latter now mostly contained.

Ann Seaton of the Northern California Independent Booksellers Association (NCIBA) told Bookselling This Week that the association does not have any members in Paradise or nearby Chico, and so they are not getting any information directly from those in the affected area up north. However, residual smoke continues to be a concern as it drifts further from its source.

“With the smoke reaching down into San Jose and throughout Sacramento and the Central Valley, schools are closed and people are being cautioned to stay inside,” said Seaton. “We’re concerned about the impact this is having on booksellers and stores throughout the smoke-filled area. Here in Sonoma the streets have been much quieter. I was in Santa Rosa yesterday and the parking lot outside of Copperfield’s was much emptier than I usually see.” 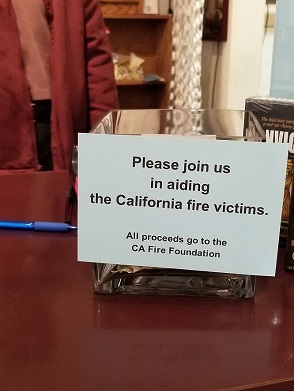 Readers' Books in Sonoma is collecting money for the California Fire Foundation.

“We’ve had several booksellers reach out to us who are strategizing ways to send books and other assistance up north,” said Seaton. “We’re collecting information and working on this outreach.”

One simple way to collect money for fire victims, added Seaton, is to do as Readers' Books in Sonoma is doing and keep a jar on the counter to collect donations for the California Fire Foundation, which helps victims of all three fires.

Pam French, executive director of the Book Industry Charitable Foundation (Binc), told BTW that Binc’s Kit Steinaway has been calling stores in the impacted areas, and so far Binc has distributed emergency aid to two families, one in Malibu and one in Paradise.

“The good news is that the ‘Binc grapevine’ has been fabulous and bookstores are letting other stores know about Binc, and we’re using social media, too,” said French. “Like the hurricanes, we anticipate it will take booksellers several weeks to access their situation and then get in touch with Binc.”

“We’ve also talked to the owner of the Paradise Found bookstore. It’s a used store, and the owner entirely lost both the store and his home. Once he is let back into the town, we’ll begin to work with him on how Binc might be able to help. And so far, we have not heard of any injury to booksellers or their pets.”

Last week, Children’s Book World in Los Angeles sent out a message to its e-mail list seeking contributions to a GoFundMe campaign for Cherry O’Meara, one of the store’s booksellers, who lost her childhood home in the Woolsey fire. O’Meara was living at the Malibu residence to take care of her 90-year-old mother, Carol, a librarian. Those who are interested can contribute to the GoFundMe here, and many of the store’s customers already have, leaving heartfelt messages along the way. So far, the campaign has raised $5,045 of its $5,000 goal over five days.

In Pasadena, Vroman’s Bookstore responded to the loss of life and property by posting a plea on Twitter to help victims: 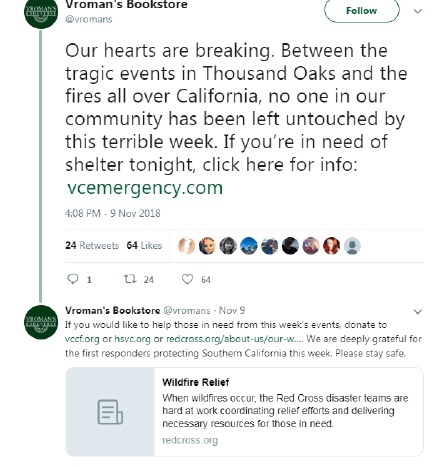 DIESEL, A Bookstore in Santa Monica, another California store, responded to the situation on Twitter with a link to resources for fire victims: 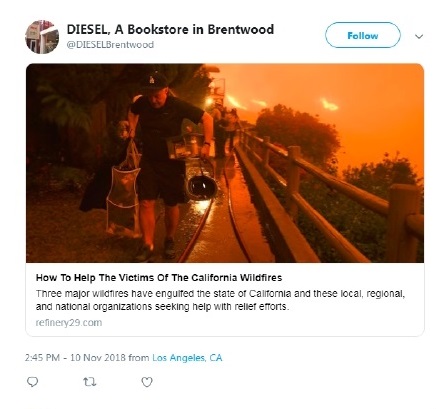 For booksellers who have been affected the fires and need immediate assistance, Binc will take disaster applications for individuals and stores over the phone or by e-mail. The organization can be contacted toll-free by calling (866) 733-9064 or by e-mailing or texting to help@bincfoundation.org.