Reading Lolita in Tehran author Azar Nafisi’s keynote speech on “The Republic of Imagination” on the final morning of Winter Institute 10 in Asheville, North Carolina, received a standing ovation from booksellers, who were moved by her message of books’ essential role in society. 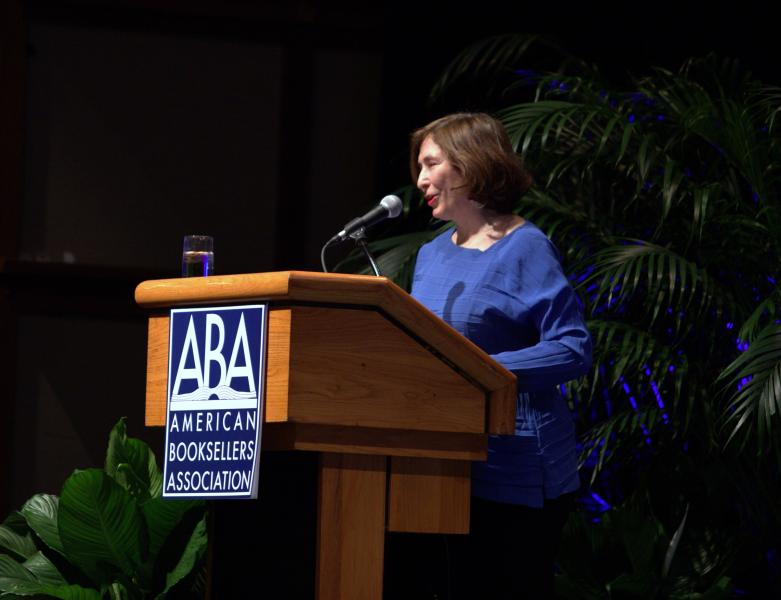 The bookselling industry is not going anywhere, the author and professor told members of the American Booksellers Association over breakfast: books perpetuate the democratic imagination necessary for a free society, and bookstores provide the venue. Independent booksellers perform a valuable service by inciting the curiosity that leads to the knowledge essential to humanity’s survival, said Nafisi, whose latest book, The Republic of Imagination: America in Three Books, was published by Viking in October 2014.

“Curiosity is the essence of why we are sitting here and why we have this passion for books,” she added.

The Iranian-born professor and executive director of Cultural Conversations at the Foreign Policy Institute of Johns Hopkins University’s School of Advanced International Studies in Washington, D.C., is an émigrée from Iran’s Islamic Republic, which she left for America in 1997. Her vibrant speech extolled the founding values and freedoms of her new country — the rights to life, liberty, and the pursuit of happiness — and quoted the authors Flaubert, Saul Bellow, James Baldwin, and Nabokov on the value of books, fiction, and reading in safeguarding those freedoms.

Nafisi told booksellers that the U.S. is going through a period of change and transition, one in which it is often argued that accumulating wealth is the most important goal and a liberal arts education is useless.

This is just not true, she said. It is artists, writers, and purveyors of knowledge, such as teachers, librarians, and booksellers, who hold the power to positively affect this country.

“We need books today more than ever because we have lost our moral compass,” said Nafisi. The crisis America struggles with is not just a political and economic one, but is essentially “a crisis of vision,” she added.

Right now is an important time for independent booksellers to guide the new world, while it is in a period of transition, she argued. But, she said, “We are not here to offer aspirin for the crisis. We are here to challenge complacency with curiosity.”

Change will take place across the world by virtue of the network of readers who are part of what Nafisi calls “the Republic of Imagination.” In this Republic, which she expands upon in her book through close readings of American literary classics such as Mark Twain’s The Adventures of Huckleberry Finn, Sinclair Lewis’ Babbitt, and Carson McCullers’ The Heart is a Lonely Hunter, people are already connected to one another in a system of genuine globalism by virtue of being readers. Here, she said, the meaning of globalism is more than just being able to find Estonia on a map. In this shared culture, “strangers become intimate strangers. You share something with them that is so essential, so human, that you don’t need any introduction…As a reader, you are not just a citizen of the United States, but a citizen of the world.”

Booksellers are the ones who provide the gateway to literature that connects these readers around the world and engenders among them a deep understanding of human dignity. This understanding encourages true empathy for all, beyond the bounds of ethnicity, race, sex, nationality, or religion, Nafisi said.

And she believes that booksellers will always have job security, a fact that rests on one of the key tenets of human nature: We need memories to safeguard us against the tyranny of death. Physical books preserve memory, she said, and that is the only evidence that we have lived.

The independent booksellers of today do not have to fear that, with the advent of e-books, customers will tire of physical print books. “Books are not just content. Form is content,” Nafisi said, adding that a printed book with actual tangible pages represents a greater degree of substance and permanence for the reader. By providing readers with access to these physical manifestations of memory, bookstores and libraries serve as custodians of American history and culture.

Wrapping up, Nafisi told the story of one book in particular that touched her life: a copy of Nabokov’s Ada that she received from her first love while a student at the University of Oklahoma. She has carried this physical book with her for more than 30 years, through moves from Oklahoma to Oxford to Tehran to Washington, D.C. Even though its pages have become dog-eared and its cover torn off, it preserves within it a precious memory of that time in her life. “Every time I touch that book I remember how my heart was joyous, and how my heart broke,” she said.