Author Kelly Link and her husband, Gavin J. Grant, who run Small Beer Press together, are set to purchase White Square Books in Easthampton, Massachusetts. Link and Grant told Bookselling This Week that the official closure date for the purchase agreement is September 30, and they plan to hold a soft opening for the store, which will be called Book Moon, in early October.

In addition to running Small Beer Press, an independent publisher based in Easthampton, Massachusetts, the two also have a history in bookselling. Link, the author of the story collections Stranger Things Happen, Magic for Beginners, Pretty Monsters, and Get in Trouble, told BTW that she and Grant, a former American Booksellers Association employee, met while working together at the recently reopened Avenue Victor Hugo Books in Boston. 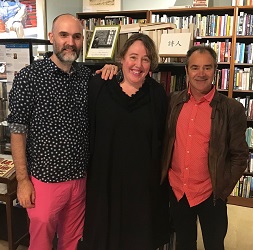 “We worked together off and on for about four years, and at various times each of us was the new book buyer or the used book buyer [for the store],” Link said, noting that as a result, both of them feel very comfortable in the bookselling world. Before working at Avenue Victor Hugo, she added, she worked at a children’s bookstore, B. Dolphin, in North Carolina.

Owning a bookstore of their own, Link said, is something they’ve been considering for a while. “Years ago, in Northampton, we made an offer on a used bookstore,” she said. “We actually thought it was unlikely that we would be able to afford to start or take over a bookstore. But last year I got a MacArthur Grant, and when we were talking about different things we could do with some of that money, White Square Books came up for sale.”

“We read about the bookstore for sale in the local paper,” Grant added, “and we kept thinking, surely someone will buy that, what an opportunity! And then we realized, actually, it’s us who want that opportunity.”

Book Moon, Link said, will be a family endeavor. “My mother and I worked together at the children’s bookstore in North Carolina, and she will also be working at this bookstore,” she said, “and we have a 10-year-old who is also very excited about hand-selling and helping to pick books.”

Book Moon will acquire White Square’s existing stock (about 9,000 titles) as well as carry new and used titles; it will also feature a wide selection of local writers. Said Link, “We’ll do our best to carry books that will be of interest to the community that are small press titles, and we’ll carry a lot of books that we love that are carried by other presses.”

The store also has an IndieCommerce website that will go live next month.

So far, Grant said, the bookselling world has been welcoming of their newest endeavor, noting that he and Link have discussed the project with Eric Obenauf of Two Dollar Radio Headquarters, Emma Straub of Books Are Magic, and Stephen Sparks of Point Reyes Books.

The local Massachusetts book community, Grant added, naming Odyssey Bookshop and Broadside Bookshop, has been welcoming as well. “No one has turned around and said, ‘Wow, that’s a mistake,’” he said. “It’s been huge handshakes, big grins, and also, ‘Call me.’”

Because of their experience running an independent press, Grant said they particularly understand the ethos of independent bookselling. “Small Beer is an indie press. Our books are distributed by Consortium. We have tried to be as independent as possible for that past 18 years that we’ve been publishing,” he noted. “We’re not a huge fan of the conglomerate voices in publishing, and by that I mean more of the retail aspect than the publishers.”

Most importantly, Link and Grant are both excited to be able to work in a bookstore again.

Said Link, “Both of us were very happy working at Avenue Victor Hugo. One of the things about running a publishing company is that you’re absolutely trying to get books you love into the hands of readers who also love those books, but what’s different about a bookstore is that you get to do that with books that are published by every press under the sun. It won’t just be the books that we publish. It will be the books that we think are wonderful.”