Tombolo Books in St. Petersburg, Florida, now has a permanent storefront and aims to open its doors before the holidays. 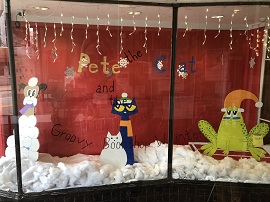 The window display featuring Pete the Cat at Scuppernong Books.

Kate Schlademan of The Learned Owl Book Shop in Hudson, Ohio, has been elected as the next councilperson to represent Ward One.

Cindy Dach of Changing Hands in Tempe and Phoenix, Arizona, received the 2019 ATHENA Businesswoman of the Year Award from the Greater Phoenix Chamber.

Cafe con Libros, WORD Bookstores, The Astoria Bookshop, Books Are Magic, The Lit. Bar, Berry & Co, and Bookends and Beginnings were mentioned in an article about women-owned bookstores.

Buffalo Street Books in Ithaca, New York, was profiled in the article “Two years after near closure, Ithaca’s community-owned bookstore is ‘thriving.’”

Kona Stories Book Store in Kailua-Kona, Hawaii, was included in a list of eight indies in Hawaii.

Sausalito Books by the Bay in Sausalito, California, was featured in an article called “Rescued Sausalito bookstore delivers on community engagement.”

Back of Beyond Books in Moab, Utah, was featured in an article called “Grateful for independent book store.”

Books Are Magic, Strand Bookstore, Arcade Bookseller, and Shakespeare & Co. were included on a list of the best bookstores in New York City.

Share your news in Around Indies! E-mail editorial@bookweb.org with photos and details of what’s new at your store, whether it’s opening for business, moving to a new location, expanding, changing ownership, hosting a special event, or celebrating a milestone anniversary