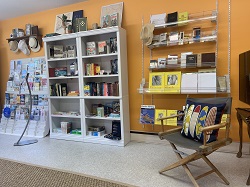 An interior view of Books on the Pond.

Earlier this summer, Books on the Pond, LLC opened in Charlestown, Rhode Island. A virtual tour of the store can be found here.

Lark and Owl Books and Bistro in Georgetown, Texas, will host a grand opening celebration on August 29.

Rediscovered Books in Boise, Idaho, plans to open a second location in downtown Caldwell this fall.

Patchouli Joe’s Books and Indulgences will open in Leander, Texas, this August.

Half Price Books will open a new location in Mishawaka, Indiana, in October.

Cabot St. Books & Cards in Beverly, Massachusetts, is now under the ownership of Meg Wasmer and Julie Karaganis, effective August 1. The store has been renamed Copper Dog Books.

Main Street Books in Orleans, Massachusetts, is celebrating its 15th anniversary this summer.

Between Books 2.0 has moved to a new location on Marsh Road in Arden, Delaware.

Source Booksellers, Pages Bookshop, and the Underground Railroad Reading Station were featured in an article titled “Now would be a good time to visit one of Detroit’s independent bookstores. Here’s a list.”

Carmichael’s Bookstore in Louisville, Kentucky, was featured in an article by The New York Times about its change in ownership.

The Ripped Bodice in Culver City, California, was featured in The Washington Post’s “Where Locals Go” series.

The Wild Detectives in Dallas, Texas, was featured in an article called “This Dallas Bookstore is Actually a Full Bar With Book-Themed Drinks.”

The Christian Science Monitor talked to Village Square Booksellers in Bellows Falls, Vermont; Malaprops’s Bookstore/Cafe in Asheville, North Carolina; and Trident Booksellers and Café in Boston, Massachusetts, for an article on the thriving of indie bookstores.

Pagination Bookshop in Springfield, Missouri, was featured on a list of five local bookstores in the city.