Reads & Company in Phoenixville, Pennsylvania, will be hosting author events in honor of its grand opening on June 7–9. 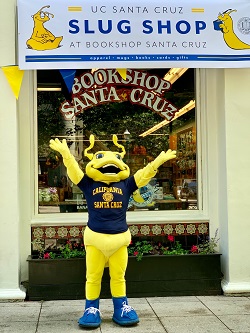 Bookshop Santa Cruz in Santa Cruz, California, opened a store within the store, “The Banana Slug Shop,” on Monday, June 3, in partnership with the University of California, Santa Cruz. The store will feature university items and the famous Banana Slug mascot.

Hannah Fenster and Emily Miller of The Ivy Bookshop in Baltimore, Maryland, created the winning display for the April Indie Playlist book promotion, which supports titles from a variety of independent presses. The win comes with a $500 award.

M and M Bookstore in Cedar Rapids, Iowa, was featured in an article titled “Taking Over a 27-year-old bookstore.”

Purple Crow Books was included in a feature of Hillsborough, North Carolina, published in Our State.